This Ajvar recipe is for an addictive sauce that blends roasted red pepper, eggplants and spices. Popular in the Balkans and referred to as “vegetable caviar”, this versatile luxurious spread goes well on bread, meats, pasta and more. Try it… it is deadly delicious and simply unforgettable.

Ajvar is a special type of salad, a specialty of Balkan cuisine, made from red pepper. Difficult to define, it is considered a salad, side dish, mezze, relish, condiment or spread.

Whatever you choose to call it, this amazingly addictive sauce is a treasure you have to try. It is one of those recipes that’s worth making at least once in your life.

This treasured recipe steeped in history is more than just a spread but also a slice of cultural heritage.

How to pronounce Ajvar

Ajvar is a culinary treasure of the Balkans and it is found on any dinner table throughout the region.

Pronounced EYE-VAR, this is one roasted red pepper sauce you want to know. It’s a versatile sauce that can be enjoyed with most dishes.

And, it is a tasty tomato sauce replacement for those with tomato allergies.

Ayvar – The King of Winter

Ajvar is traditionally made in the late summer into early fall. In the Balkans, families roast red peppers and eggplants as part of zimnica or food for the winter.

In this way, ajvar is conserved throughout the winter season bringing comfort for the cold and gloomy days.

Ajvar is steeped in tradition and every family and region has their own unique ajvar recipes. You can find ajvar that is mild and fruity or spicy and hot with the addition of chili peppers.

In some regions of the Balkans, the roasted peppers are combined with garlic and eggplants. And, the most revered ajvar recipes are those prepared by hand and cooked in large pots over a wood fire.

In this ajvar recipe, we combine peppers and eggplants with a dash of freshly ground black pepper for an added bite.

We roast the peppers and eggplant in the oven making it easy to peel so that you can simply savor this luscious Balkan delicacy.

Where is Ajvar From – Origins and History of a Beloved Dip

Each jar of ajvar has its own story.

And, the origin story is hard to pin down as it is made all over the Balkan countries with slightly differing recipes.

According to some sources, Macedonia is often credited to be at the origins of ajvar. Slovenia claims it as well with a slightly milder recipe.

Belgrade, the capital of Serbia and Leskovac in the southern part of the country are also said to be the birthplace of ajvar.

The red peppers that grow in Leskovac and Macedonia are among the best and sought out in the region for ajvar.

They ripen naturally in the sun and are flavorful, sweet and can also be slightly peppery.

They have a vibrant red color, are flat with a pointed horn shape making them easy to cook over open fire.

Locally, the ajvar peppers are known as ajvarka and red bullhorn peppers can also be used as well.

Going back even further in history, gastronomy experts believe the Ottomans who conquered the region also consumed ajvar.

Discovering Ajvar Spread in The Balkans

While exploring the Balkan countries, ajvar was one dish we came across often, at almost every meal.

Sometimes it was referred to as a salad, other times it was a side dish that accompanied grilled meat and sausages. And at other times, we had ajvar simply as a snack lusciously spread on fresh bread.

Before visiting the Balkans, we had never tried ajvar and didn’t have anything to compare it to.

And, every time we had it in the Balkans we couldn’t get over the incredibly fresh flavors. In each country and more realistically in each restaurant the flavor was rather nuanced.

We enjoyed the slightly more peppery tastes which seemed to work better with savory dishes.

And above all, homemade ajvar, by a home cook or made fresh at a restaurant is the best way to experience this dip.

RELATED: 17 Authentic Foods and Drinks From Montenegro You Want To Try

Homemade Ajvar Sauce – How To Make Ajvar at Home

Homemade ajvar is exceptional and easy to make at home. It’s magic lies in the ingredients used.

Choose the freshest vegetables available. Look for red peppers without visible damage. The natural ingredients are few and include eggplant, oil, vinegar, black pepper, salt and a little sugar.

Here’s what you need for gastronomic enjoyment

Traditionally, ajvar is prepared by roasting peppers over a wood fire or by using a special iron furnace.

In this ajvar recipe, we’ll be making it in the oven and roasting the peppers until the skin darkens and turns black.

Be sure to check the peppers frequently, removing the ones that are done and flipping the others around.

To preserve the taste, the only part of the pepper that blackens is the outside layer. The flesh underneath should not be dark.

Make sure not to wash the peppers with water. To clean or remove the black parts, use your hands or a knife.

This ajvar recipe is best made in bulk. Set time aside one weekend and gather your family and friends to help.  You’ll all enjoy the sweet and tangy tastes of summer all winter long.

Like ajvar, you’ll find differences in lutenitsa recipes with tastes ranging from mild to spicy.

Pindjur, while popular in the Balkans, is most associated with Macedonia where it is a traditional summer relish.

In fact, when we first arrived in Macedonia in August, pindjur was the only seasonal relish available.

While similar to ajvar,  its accent is on tomatoes, and not on peppers. Surprisingly, when we had it in Skopje, Macedonia’s capital, it was made using green bell peppers.

An eggplant is also added as well as cloves of garlic and other spices.

Like other popular Balkan spreads, there are differences in recipes and preparation styles across the region.

Using Ajvar as a Tomato Substitute

Those who suffer from tomato allergies or are tomato intolerant, will love ajvar as a substitute.

This peppers and eggplant spread is quite similar to tomato sauce in texture and the vibrant red color.

While the taste is different from tomatoes, it works for putting on pizza, pasta, sandwiches and all your favorite foods.

Bringing extra delight to your senses, those that don’t eat tomatoes can enjoy this delicious Balkan specialty.

How Long Can you Keep Ajvar in the Fridge?

Once you open a jar of ajvar, you want to store it in the fridge and eat it within a week or two.

Ajvar also freezes well in the fridge and should be wrapped in plastic wrap and aluminum foil.

Some people say ajvar is even tastier after a few months. To store your ajvar for a couple of months, be sure to use well sterilized jars.

Afterwards, store your jars of ajvar in a cool dark place like a basement. Properly sterilized and stored in cool temperatures, you can safely consume for a winter season.

How To Eat Ajvar

In the Balkan region, ajvar can be served as a salad, side dish, eaten with cheese or spread on bread.

We particularly enjoyed it with savory grilled meats, as a spread in sandwiches and cooked with scrambled eggs for breakfast.

At home, you can have this delicious Balkan treat in a number of ways. You can use ajvar as a dip or have it as a sauce to accompany your pasta dishes.

We highly recommend having it with your grilled meat dishes as the flavors are quite complimentary. A glass of Balkan wine perfectly rounds out the experience.

Don’t be surprised that once you make ajvar, it will quickly become your go-to sauce or condiment.

RELATED: Plantaze Winery – Vranac Wines At One Of The Largest Vineyards in Europe

Place the red bell peppers and eggplants in a deep baking dish. Let them bake for about one hour until the skin gets wrinkly and blackened.

Once you have removed the skin of the peppers and eggplant, mix them well in a blender or food processor. Transfer mixture into a large cooking pot, season and let it simmer over medium low heat.

After cooking, remove from heat and transfer into well sterilized and pasteurized jars for storage. 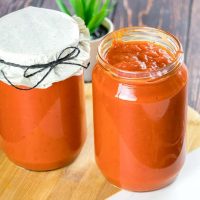 How To Make Pebre – A Delicious Chilean Sauce

Bulgarian Food Guide: What You Should Know And Love