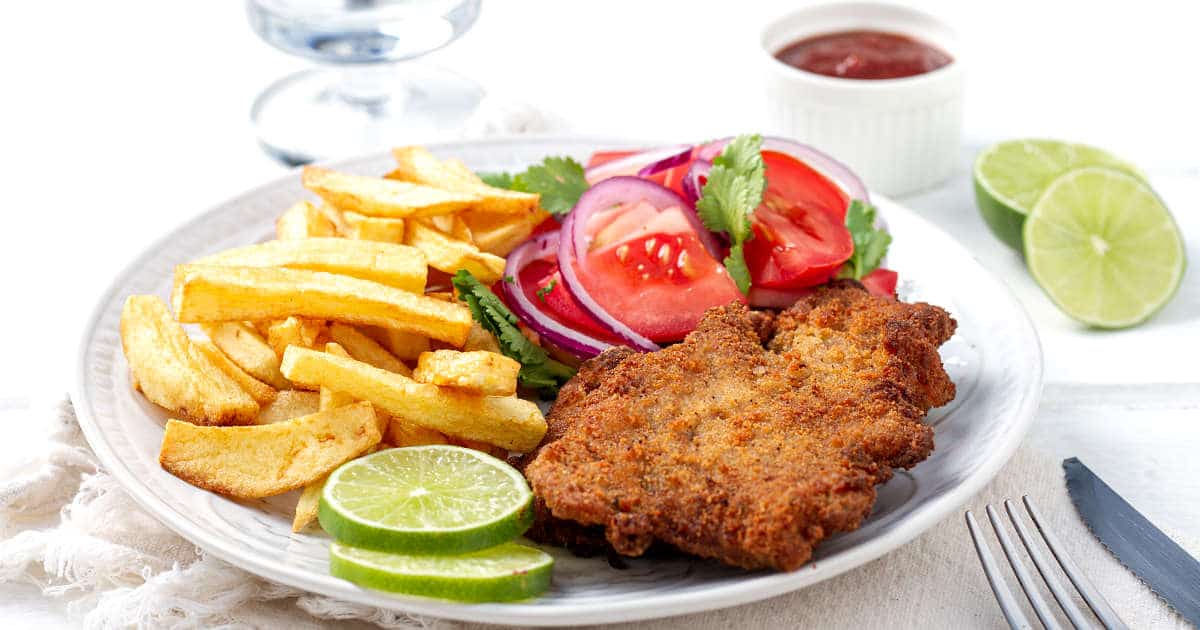 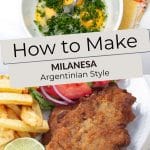 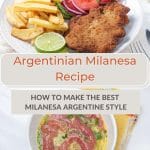 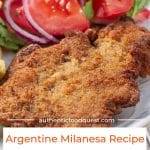 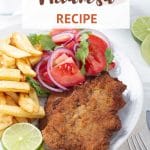 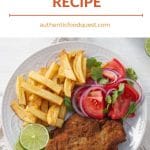 This Argentine milanesa recipe is for a quintessential Argentine dish, considered the country’s unofficial national dish. Easy to make, all you need is thinly sliced beef or veal, coated in crunchy bread crumbs and then fried until deliciously golden brown.

Argentines have a love affair with milanesa and it can be found in virtually any restaurant or home kitchen.

In its most simplest form, it is breaded steak or veal. The milanesa is similar to the Wiener Schnitzel from Austria and linked to the Cotoletta alla Milanese from Italy.

Versions of milanesa are eaten in several European countries like France and Germany. In  North and South America it is also quite popular. In Mexico, it goes by milanesa de res or meat milanesa.

In Chile, it’s known as escalopa and it’s also found in Uruguay and Paraguay. Milanesa made with chicken is popular in the southern region of the United States, where it goes by chicken fried steak.

Milanesa Argentina is loved by all Argentines, young and old. In Argentina, the milanesa is made with different cuts of meat with no ribs or bones and then pan fried in vegetable oil.

So popular, it is said that Argentines eat at least one milanesa a week.

AUTHENTIC FOOD QUEST TIP: A good milanesa starts with using high quality tender cuts of steak. Beef tenderloin and roast cuts are used in the Argentine traditional recipe. Porter Road, whom we recommend, ship humanely raised meat everywhere in the contiguous United States. Their meats are sourced from family-owned and operated farms whose animals are pasture raised without the use of antibiotics or hormones. Find out more.

Argentinian milanesa is a meal that combines Argentina’s love for meat with their heavily Italian influenced cuisine.

Some people believe that the beef milanesa owes its name to the famous Italian city of Milan. In Milan, the most similar preparation to the Argentine beef milanesa recipe is called cotoletta alla milanese.

However, this Milanese dish has some differences with the Argentine milanesa recipe.

The cotoletta alla milanese is made with beef rib, a piece of meat that contains a bone, unlike the Argentine beef milanesa that has no bones.

On the other hand, the Argentine Milanesa is seasoned with garlic and a little parsley, whereas the cotoletta is a bit simpler.

The origins of the milanesa are heavily disputed between the Italians and Austrians. Some date the famous Austrian “Wiener Schnitzel” to the mid-1800s.

However, in Milan, Italy, the Chapter Archives of Sant’Ambrogio link the first mention of the Milanese cutlet to 1148.

The battle for the rights to claim the invention of this dish is ongoing and it is celebrated in both countries.

Meanwhile, in Latin America and Argentina specifically, the milanesa arrived with Italians during mass emigration between 1860-1920s.

There are several versions of milanesa including chicken milanesa, fish, soy or eggplant.

When topped with a fried egg, it’s known as milanesa a caballo. While milanesa napolitana has tomato sauce, melted cheese and ham.

Every year on May 3, Milanesa Day is celebrated in Argentina.

Local markets are troves of treasures. Places to discover the local culinary gems. When exploring the local food specialties in Argentina during our three month stay, we visited many local markets.

In Buenos Aires, at Mercado del Progreso, a historic market in the city, is where we first discovered Argentinian milanesa.

The market, predominantly made up of butchers, had several stands of people pounding meat and covering it with bread crumbs.

We watched in fascination as they prepared Argentina milanesa with beef, chicken, veal and soy.

Later, to try the milanesa, locals recommended Don Ignacio, a local restaurant with the best milanesa in the city.

We tried one of the specialty milanesa dishes topped with ham, melted mozzarella cheese, onion, olives and oregano.

Served with a side of thick cut fries, it was outstandingly delicious.

Just one bite and you’ll quickly understand why this dish brought by Italian immigrants is the country’s unofficial national dish.

Argentine Milanesa Recipe – How To Easily Make Milanesa at Home

The ingredients for this Argentine milanesa recipe can be found in most kitchen pantries.

Meat is the most important ingredient. Choose lean, tender and thin slices with no excess fat.

Then you’ll need eggs, and garlic, parsley, salt and pepper for seasoning.

For the oil for frying, use a neutral oil like canola, sunflower oil or vegetable oil.

Marinate the meat for the fullest flavors. Nothing could be simpler than this Argentinian milanesa recipe. If you have a good piece of meat, you are already halfway there. All that is left to do is to let the meat rest for about one hour to absorb the parsley, garlic and pepper flavors.

Frying oil. When frying be sure the oil is very hot at the moment you insert the piece of meat. This will make your Argentine milanesa golden colored and perfect.

Argentina Milanesa can be served in many different ways. Milanesa Napolitana is one of the most popular versions. It’s usually beef milanesa covered in tomato sauce, melted mozzarella cheese and ham.

In Argentina, it is usually served with mashed potatoes or french fries.

Another famous variation uses chicken instead of beef.

Milanesa a Caballo or Argentinian Milanesa on Horseback

While caballo translates to horse in Spanish, this milanesa does not use horse meat. The milanesa a caballo simply refers to a milanesa topped with a fried egg.

One surprising and equally delicious version of the milanesa Argentina is the sandwich version. In this case, the milanesa is served between two slices of baguette white bread with lettuce, tomatoes and mayonnaise.

This version is particularly popular as a street food and an easy way to enjoy delicious milanesa.

What To Eat With Argentinian Milanesa?

In Argentina, there is only one acceptable accompaniment for milanesa. It’s potatoes, potatoes, and more potatoes.

The best and tastiest are home cooked french fries. Mashed potatoes or puree is a great alternative as well.

In this Argentina milanesa recipe, we pair it with homemade french fries and a small green salad.

AUTHENTIC FOOD QUEST RECIPE: To complete your meal, check our Authentic Chocotorta Recipe for an easy to make dessert

Season the veal steaks and let them rest in the refrigerator. Add garlic and parsley to the eggs and mix together. Add salt and pepper to taste.

Soak and Bread The Veal Cuts

Place the veal steaks into the beaten eggs mixture. Coat with bread crumbs on both sides.

When the oil is very hot, fry the veal steaks on both sides until they are golden brown.

Enjoy with french fries and a side salad. 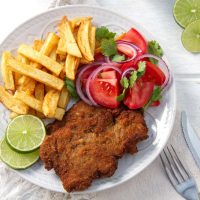 Our book, Authentic Food Quest Argentina takes you on a journey through food in four main regions of Argentina. Buenos Aires, Mendoza & the Wine Regions, the Andean Northwest, and Patagonia & the Lake Region.

In it, you’ll find descriptions of the typical dishes, desserts, beverages, street food and unique produce not to miss. Also included is an overview of the farmers markets and local stores, restaurants, wineries and local producers worth visiting.

Throughout the guide, are stories and insights shared by local experts including Argentina’s most renowned Chef, Francis Mallmann.

By combining storytelling with local information, this unique guidebook inspires intrepid and armchair travelers to savor their adventures in Argentina.

You will find it available on Amazon.

10 of The Best Buenos Aires Markets To Taste Argentina

Bifana Recipe – How To Make The Best Portuguese Sandwich

Is Snake River Farms Wagyu Worth It? A Full Review About SRF Meats

10 Comments on “Argentine Milanesa Recipe: How To Make The Best Milanesa Argentina Style”