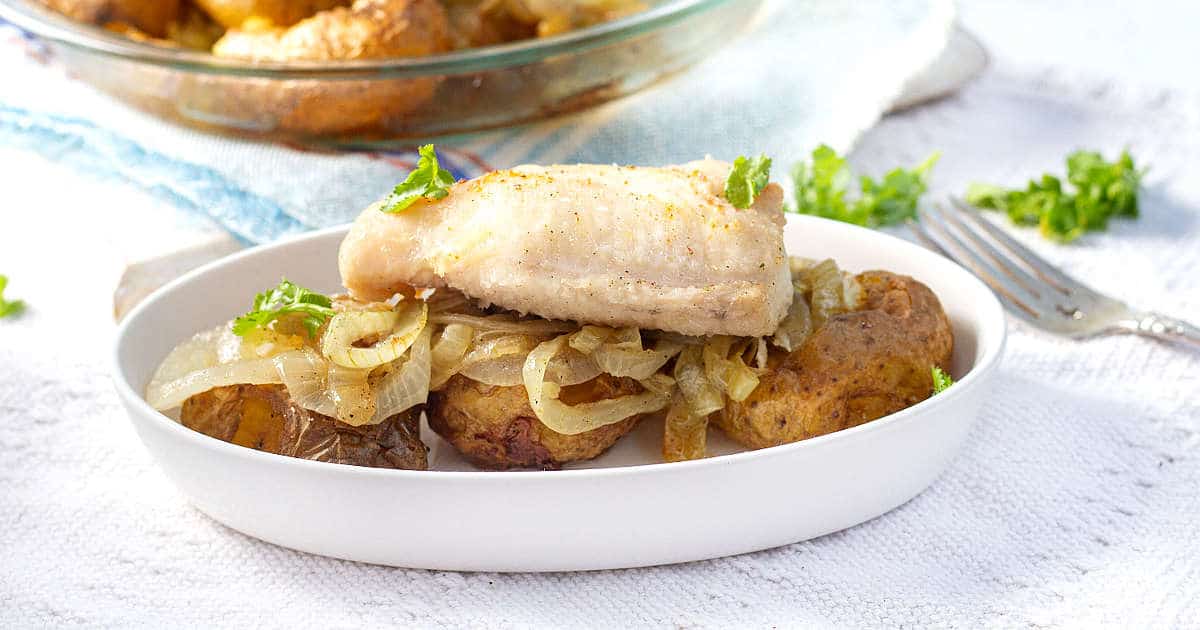 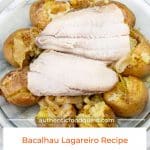 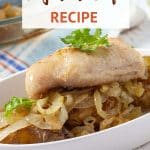 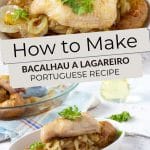 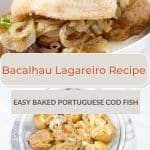 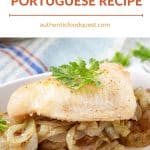 This bacalhau a lagareiro recipe is for a classic Portuguese codfish dish that is effortless to make. Simply bake codfish with potatoes, add olive oil, onions, and garlic and create a delicious dish everyone will rave about.

What is Bacalhau à Lagareiro or Cod Fish Lagareiro Style?

The Bacalhau a Lagareiro, goes by many names in Portugal. It is sometimes referred to as bacalhau assado com batatas a murro or bacalhau no forno or oven baked cod.

This is one of the most famous ways of preparing codfish as it is delicious and uncomplicated.

It combines baked cod and potatoes abundantly coated with Portuguese olive oil along with onions and garlic.

The “à lagareiro” style of cooking typically refers to the abundant use of Portuguese olive oil in the recipe.

Lagar is the Portuguese word for the place where olive oil is made. And, Lagareiro is the name given to the individual who works in an olive oil mill.

This bacalhau a lagareiro recipe, not surprisingly, calls for a bathing of the cod and potatoes in luscious Portuguese olive oil.

Onions, garlic and herbs are added to the recipe and some versions even call for the addition of olives.

Once baked the result is slightly crispy potatoes, with soft onions and fish cooked to perfection.

History of Bacalhau A Lagareiro Recipe

The origin of Bacalhau a Lagareiro is controversial. However, it most likely comes from Lagares das Beiras, between the south of the Douro River and the north of the Tagus River.

A town belonging to the Parroquia Oliveira do Hospital in Portugal.

In Lagares, olive plantations are plentify and the workers are known as lagareiros.

In the past, the mills were rustic tanks where olives were first crushed into paste. And, then large millstones would be used to crush the paste and extract the oil.

The process of making the oil was arduous and delicate and overseen by a lagareiro.

To make sure the oil was of the highest standard, some of the testing included using it in dishes.

In the town, bacalhau a lagareiro was made with the first harvest oil. When it turned out perfectly, it was a source of joy and relief knowing the olive oil was good.

The town’s oral tradition tells that, after a good harvest, there was a grand celebration with recipes.

The codfish was desalted, covered in breadcrumbs, and fried in olive oil directly in the Lagareiro.

Today we present the modern version of the bacalhau à lagareiro, baked with potatoes, onion, garlic and lots of olive oil.

Discovering Bacalhau A Lagareiro In Portugal

While in Lisbon, we stayed in Penha de França, a non-touristy neighborhood in the city.

Around the corner from our Airbnb apartment was Carvoaria Jacto Restaurant, a neighborhood restaurant always full with locals.

One evening, we stopped in for dinner and Rosemary ordered the bacalhau à lagareiro. On the menu though, it went by other popular name bacalhau assado brasa com batata a murro.

Though modest in appearance, this à Lagareiro cod fish dish exceeded our expectations.

It was a very simple preparation of roasted codfish accompanied with potatoes.

We very much enjoyed the simple flavors and the way it was prepared. Though massive in size, we savored every last bite.

The secret to the exquisite flavors of bacalhau à lagareiro is in the use of high quality ingredients.

The Portuguese cod fillets need to be of the finest quality. And, equally important is the use of the best Portuguese olive oil available.

Follow the simple instructions below and enjoy making this delightful bacalhau lagareiro recipe at home.

READ MORE: 7 Of The Best Lisbon Food Tours You Want To Try

To prepare this simple bacalhau à lagareiro recipe,  you need just a few ingredients. The main ingredient is salt cod.

This cod must be desalted for at least 24 to 48 hours before preparing this bacalhau dish.

Alternatively, you can also use ready to cook cod fish pieces to save time.

AUTHENTIC FOOD QUEST RECIPE: If you have left over cod fillets and want to try another Portuguese recipe, try our simple and delicious Bacalhau à Brás recipe.

The most important part of this Bacalhau a Lagareiro recipe is to desalt the cod. For this, you must soak the cod in water for about 24 to 48 hours.

During this period, change the soaking water every six hours. Be sure to leave the cod in the fridge the entire time in a vacuum sealed container with a lid.

Alternatively, you can use ready to cook cod fillets, which are delivered frozen, and must be thawed out first before cooking.

AUTHENTIC FOOD QUEST RECIPE: For another traditional Portuguese recipe made in the “à lagareiro” style of cooking, see our Polvo A Lagareiro Recipe: How To Make Octopus Portuguese Style

Bacalhau a Lagareiro, the classic Portuguese food is quite effortless to make.

The base of bacalhau a lagareiro, the classic Portuguese food is potatoes. Since potatoes have a longer cooking time than cod fillets, you have to cook everything separately.

It is best to bake or steam the potatoes until they about 70% done. These half-cooked potatoes are first lightly mashed and then baked a second time. This time with lots of fried onions and garlic, cod, and herbs.

Olive oil features prominently in Portuguese cuisine. It is added abundantly to numerous dishes including this bacalhau à lagareiro recipe.

You want to use high quality ingredients including Portuguese olive oil for the best flavors.

We’ve had the pleasure of using and  cooking with Esporão’s olive oils, some of the best in Portugal from the Alentejo region.

The Esporão’s oils are produced using natural methods and traditional processes. What you get in the bottle are the best flavors preserved from the pure juice of the olives that are harvested.

Wash the potatoes and clean them thoroughly. Using a sharp knife, slice and remove any of the dark spots.

Peel the onions and cut them into thin slices. Peel the garlic cloves and crush them. In a skillet or frying pan, pour a little olive oil.

Cook the sliced onions with garlic for about 10 minutes, until onions are golden brown.

Slightly mash the baked potatoes and place the cooked onions over them. Spread the onions around to cover the potatoes.

Place the uncooked and seasoned pieces of cod loin on top of the punched potatoes. Drizzle with olive oil and put back in the oven. Bake for another 20 minutes at 300°F /150°C. 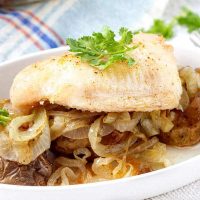 If you prefer, you can also substitute chopped parsley for coriander or cilantro.

10 Most Popular Portuguese Dishes You want to Enjoy

Top 10 Authentic Foods You Want to Delight in Porto

The Best 10 Portuguese Cookbooks To Taste Portugal In Your Kitchen

How To Make The Best Authentic Boureki Recipe From Chania Crete

11 Comments on “Bacalhau a Lagareiro Recipe: How to Make Cod Fish Lagareiro-Style”