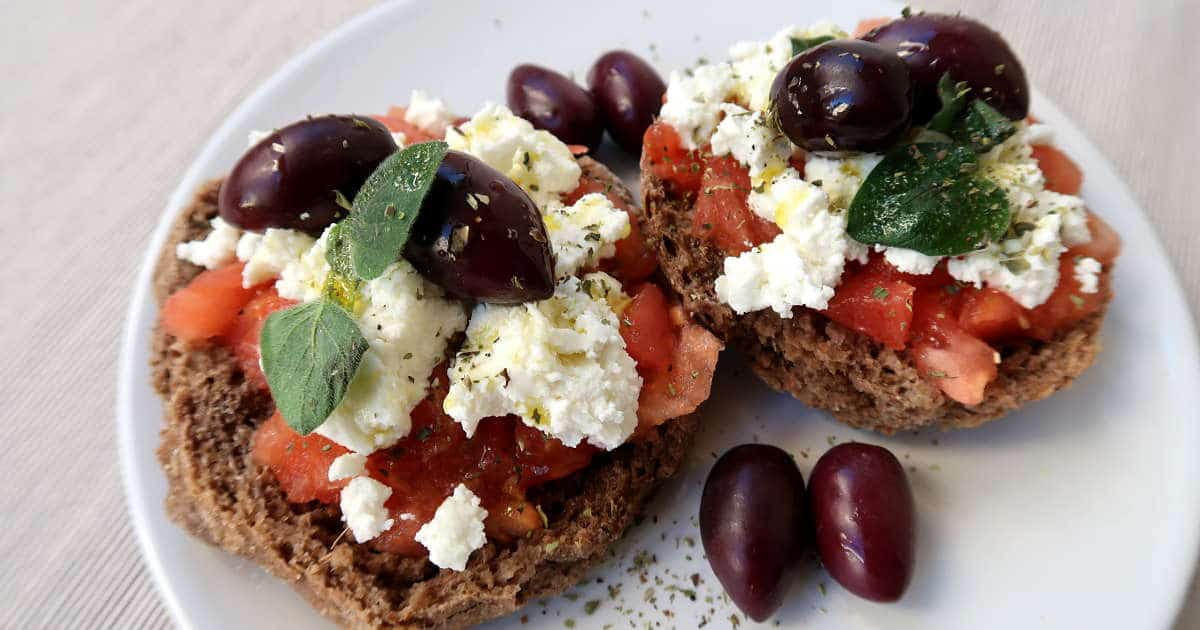 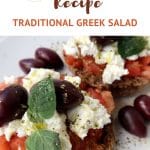 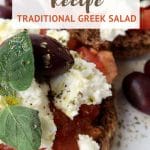 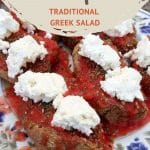 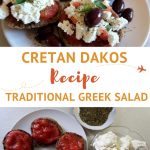 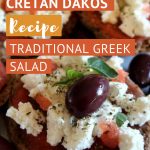 This Cretan dakos recipe is for a traditional salad from the island of Crete. Super simple to make it consists of a Cretan barley rusk topped with juicy tomatoes, cheese and olive oil.  A guaranteed crowd pleaser, all you need is a few great quality ingredients for delicious Greek Mediterranean flavors.

What Are Cretan Dakos or Ntakos?

Cretan dakos, also known as ntakos, is a much loved traditional Greek Cretan salad. It is often served as a salad, light meal or in bite-sized appetizers called meze.

The base of this dakos salad is a dry barley rusk known as paximadia in Greek. The rusk is topped with the freshest ingredients.

What is Barley Rusk or Cretan Rusk?

Barley rusk is the same as a Cretan rusk and it literally means twice-baked-bread made of barley flour.

With no refrigeration or preservatives, making rusk was a way of keeping bread for as long as possible.

The bread is typically baked twice until all the moisture has been absorbed. In Crete, barley flour is the traditional flour used for Cretan dakos.

The dry barley rusks used to prepare Cretan dakos are as hard as nails. You have to be careful not to break your teeth.

Before eating them, the ntakos need to be softened up. This is typically done by wetting the rusk with water.

Barley flour is rich in fiber, packed with vitamins and nutrients. It helps with better intestinal and liver function and contains less gluten than wheat.

Where to Buy Barley Rusk

In Crete, barley rusk or paximedia is available at every bakery, grocery store or supermarket.

To bring a taste of the Mediterranean and Crete home, you can buy barley rusk on Amazon and have them delivered to your home.

Alternatively, if there is a specialty food store near your area, you may be able to find barley rusk.

Keep in mind Cretan rusk are dark in color and made entirely with barley. For authentic flavors, choose the rusk made with 100% barley flour.

Of all the different foods we tried in Crete, one we loved and kept coming back to was the Cretan salad or dakos.

What we loved the most about it was the simplicity, fresh ingredients and incredible flavors.

Cretans are known for their friendliness and hospitality and our Airbnb host was no exception. When we arrived in Chania, the first thing we were welcomed with was a plate of delicious Cretan dakos.

Almost every restaurant menu has Cretan dakos listed amongst their appetizers. We also enjoyed a few dakos salads from restaurants as well as when gathering with locals.

Each time we had a Cretan salad we were continually amazed by its simplicity and juicy flavors.

READ MORE: How To Make the Best Authentic Boureki From Chania, Crete

Rusk, also known as paximadia in Greek have been around since antiquity. They can be found in all parts of Greece.

What makes the Cretan rusk unique is the fact that they are made with whole-grain barley flour. And, in Crete, the dakos salad is topped with the traditional local cheese known as mizithra.

Cretan dakos are also referred to as Koukouvagia or owl in Greek. They take the name  from the resemblance of an owl when looked at from above.

The black olive in the center of the dakos resembles the eye of an owl. And, it is even more pronounced when two dakos are placed side by side.

The name “Koukouvagia” is linked to many local tales. One story attributes it to the name of a bar owner near the town of Rethymno in the 1950s.

This tavern allowed men the forbidden pleasures of tobacco, gambling and women.

To keep the customers happy, the owner, Koukouvagia, served dakos and the name remained associated with him.

Others link the name to the many owls that were seen around the tavern every night.

Tips to Make a Cretan Salad At Home

Cretan dakos is one of the simplest and easiest things to make. They can be fantastically delicious if you use fresh high quality ingredients.

The secret behind perfect nkatos is to use fresh and juicy tomatoes, as they are key to bringing this dish to life.

The olive oil brings the perfect touch to the traditional Cretan rusks with tomatoes and mizithra cheese.

Mizithra cheese is one of the most prominent traditional Cretan cheeses. It is a soft white cheese with a pleasant slightly sour taste.

You can find mizithra cheese at the cheese section of a specialty store near you, or have it delivered to your home from Amazon.

Otherwise, you can also use authentic Greek Feta cheese instead.

Grating Tomatoes For Your Cretan Salad

To make the tomato sauce as they do in Crete, you want to grate the tomatoes. Slice your fresh juicy tomatoes in half and grate them using the medium holes to release the bright and fresh flavors.

Scrape each sliced tomato back and forth until the skin flattens. Set the grater onto a plate or large bowl to catch the juices that inevitably run onto the counter. 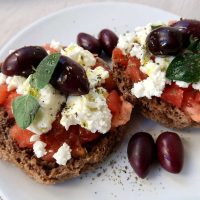 More Traditional Recipes From Around the World

How To Make Pebre – A Delicious Chilean Sauce