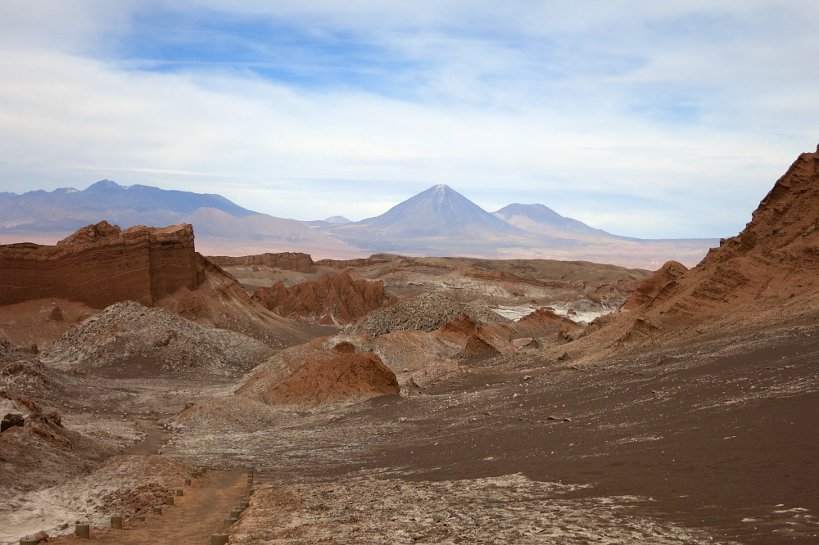 When you think about a desert, what comes to mind? I’m pretty sure local produce or original cuisine are not the words you spontaneously came up with. When friends recommended us to visit the region, we decided to make a stop. When top chef, Rodolfo Guzman encouraged us to explore the cuisine of the Atacama Desert, we made a point to discover the Chilean desert food specialties.

The Atacama Desert is known worldwide for 4 things – being the driest desert in the world, the astronomy, Rally Dakar and the flowering desert. Unlike more familiar deserts, like the Sahara desert in Africa and the Mojave in California, the Atacama is actually a pretty cold place, with average daily temperatures ranging between 0°C and 25°C. The annual rainfall (or lack of it) defines a desert, but that doesn’t mean that it never rains in Atacama. Every so often a warming effect over the Pacific Ocean around the equator changes the weather. Earlier this year the desert blossomed after some unusual rain.

Creating a base in San Pedro de Atacama

Our journey to the desert began with a 24-hour bus ride from Valparaiso. We changed buses in Calama and arrived exhausted in the middle of the desert in the little town of  San Pedro de Atacama. 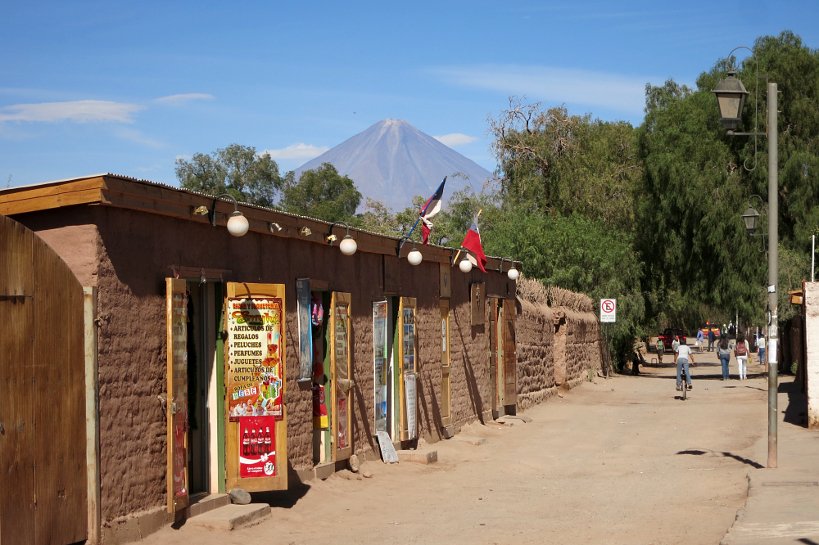 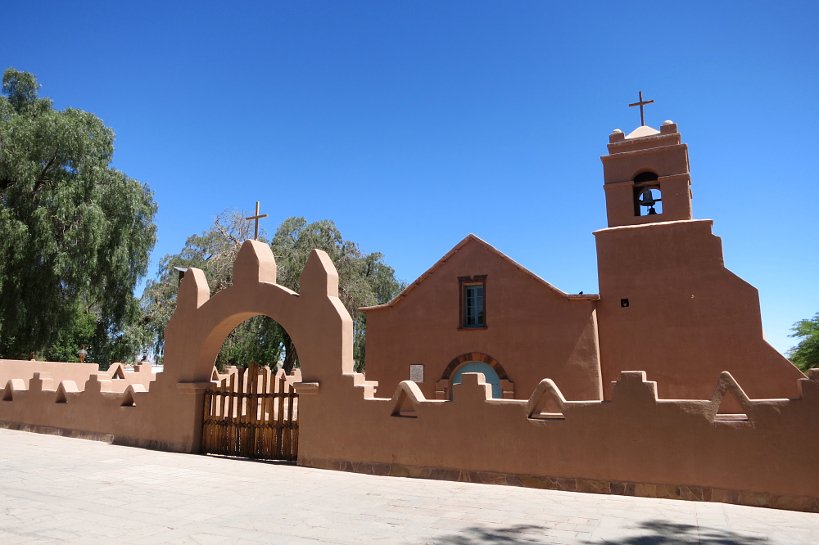 While our primary focus is the quest for authentic food, we also took the time to enjoy the local sites and attractions. Before we dive into the Chilean desert food, there are two activities you don’t want to miss during your stay in San Pedro de Atacama.

Atacama is one of the world’s foremost stargazing centers, with major international observatories. The ALMA Observatory, the world’s largest microarray telescope, a $1.5 billion behemoth that’s more powerful than the Hubble telescope opened up in Atacama recently. The dryness, altitude and  clear skies with an absence of light pollution means the stars and planets of the southern sky are there for all to see.

Alain, a quirky frenchman and his Chilean wife have set up an impressive set of 10 telescopes, along their property just outside of San Pedro. They operate under their company Space Obs (San Pedro de Atacama Celestial Explorations) and offer tours in English, French and Spanish (we took the tour in French) for about CLP 20,000 or (USD $28.62) per person.

The almost three hour tour started at 11pm and was broken up into three parts. The first part was about learning about the sky with our naked eye. Using his laser pointer, Alain pointed out stars, constellations, planets and galaxies. With lots of imagination we saw the entire constellation of Orion, Sirius, the brightest star in the sky and more.

The second part of the tour was using the giant telescopes to see the stars and the moon. Space Orbs has the largest park of telescopes of any public observatory in South America, and one of the reasons we chose to do this tour. Highly recommend it. Below are pictures of the telescopes and the moon. 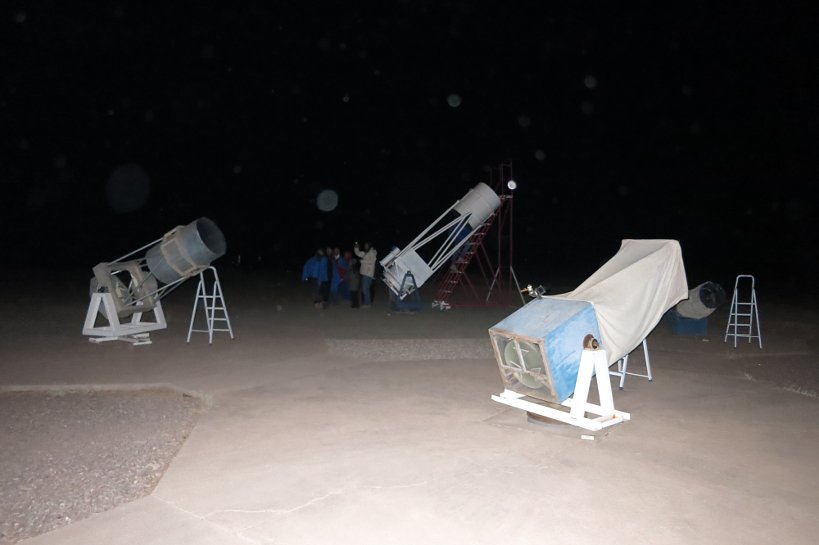 Star Gazing with the Telescopes 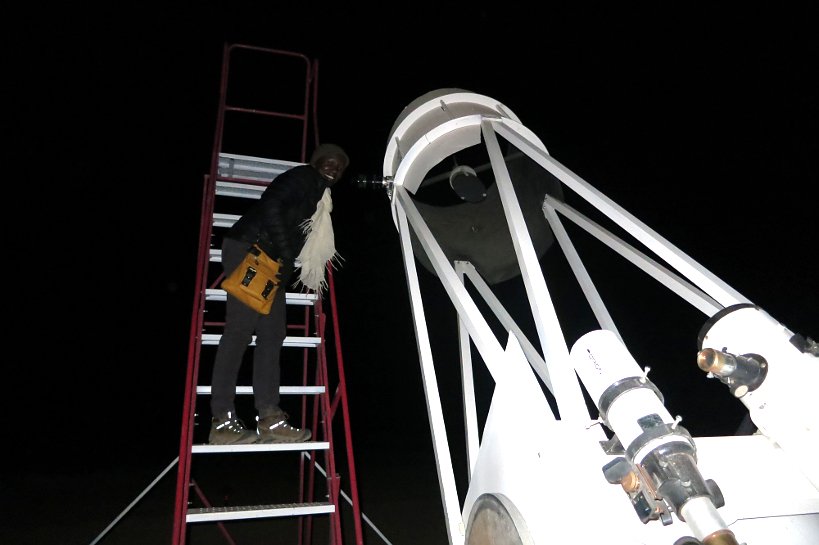 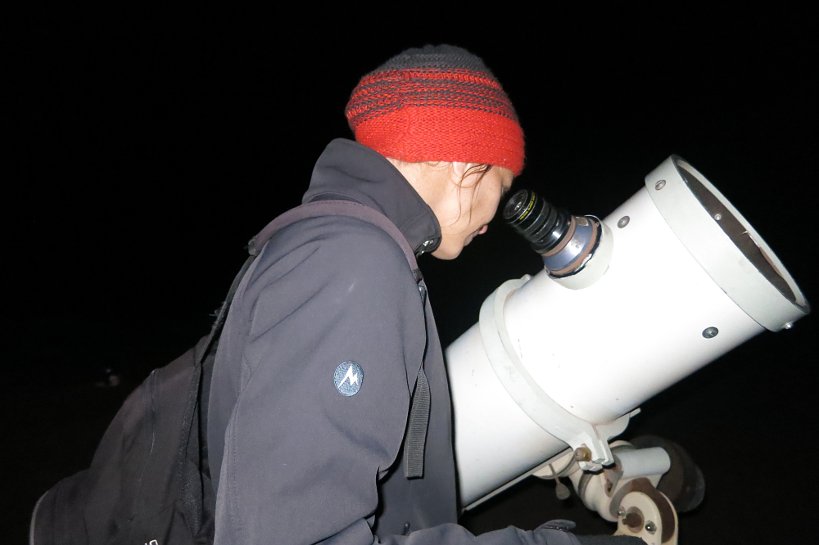 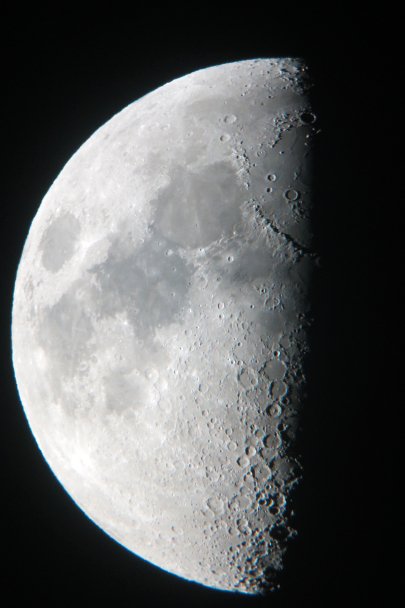 View of The Moon

The tour ended with hot chocolate inside and a Q&A session. The warm drink was much appreciated. In the blistering heat of the day, it’s hard to imagine how cold it can get in the desert. We had a great night star gazing and enjoyed Alain’s humor and wit.

In San Pedro de Atacama, you will find many tours and expeditions to explore the surrounding volcanoes, geysers, salt flats, moon-like valleys and remote villages. Rather than take an organized tour, we prefer to get off the beaten path and opted to explore the valleys on mountain bikes. Valle de la Muerte (Death Valley) is 6 km away from San Pedro and Valle de la Luna (Moon Valley) is 16 km away, both accessible by bike. Feeling the desert heat and seeing the landscape by bike  is definitely the way to go. However, be prepared for the heat. Drinks lots of water and apply sunscreen liberally and frequently.

The gigantic sand dunes and natural sculptures in the Valley de la muerte were nothing short of admirable. The extraordinary landscape, colors and texture that resemble the moon’s landscape make valle de la luna a geologic spectacle. See the short video here on the landscape of valle de la luna. Fun fact: NASA and other international collaborators use the desert to test robotic vehicles that are to be used on Mars. 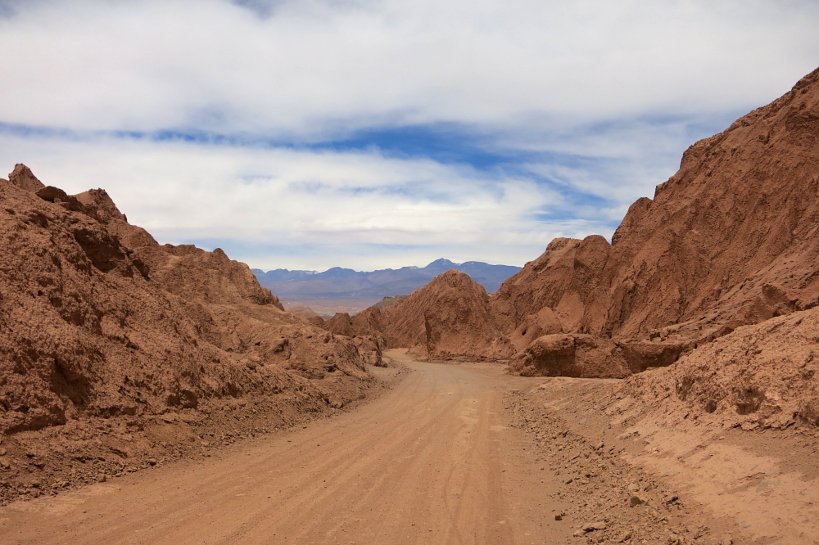 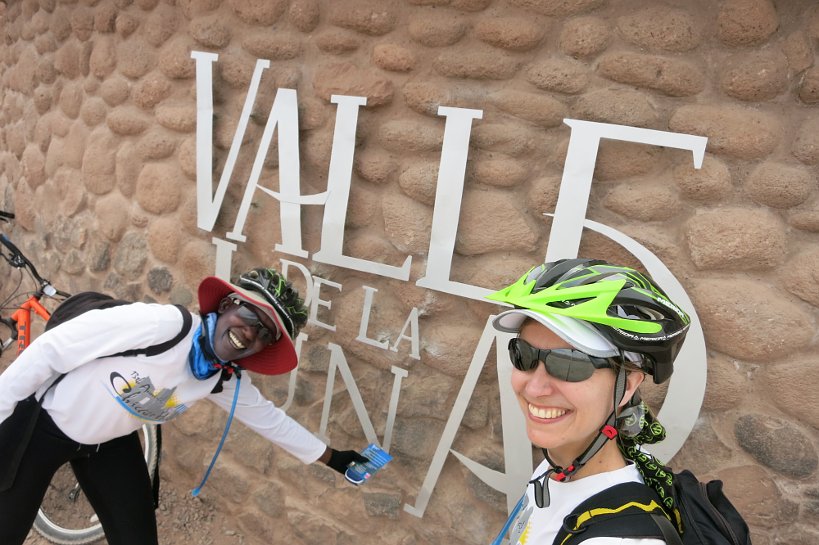 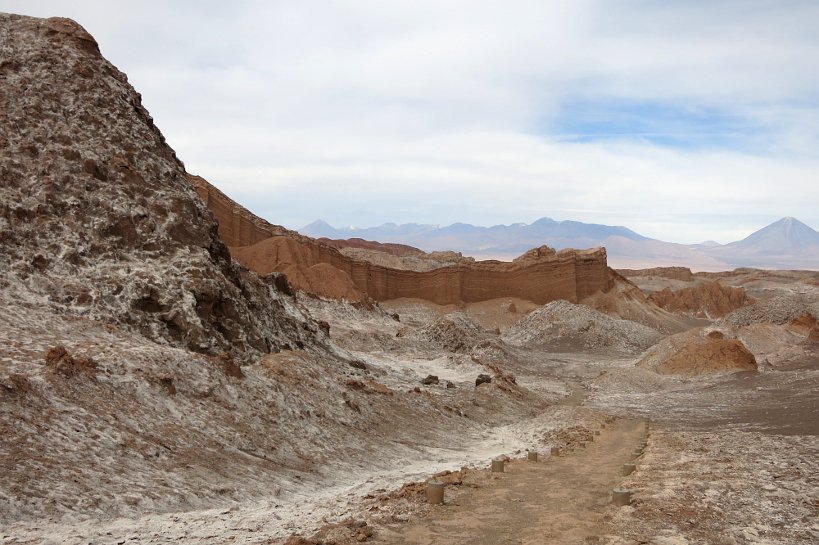 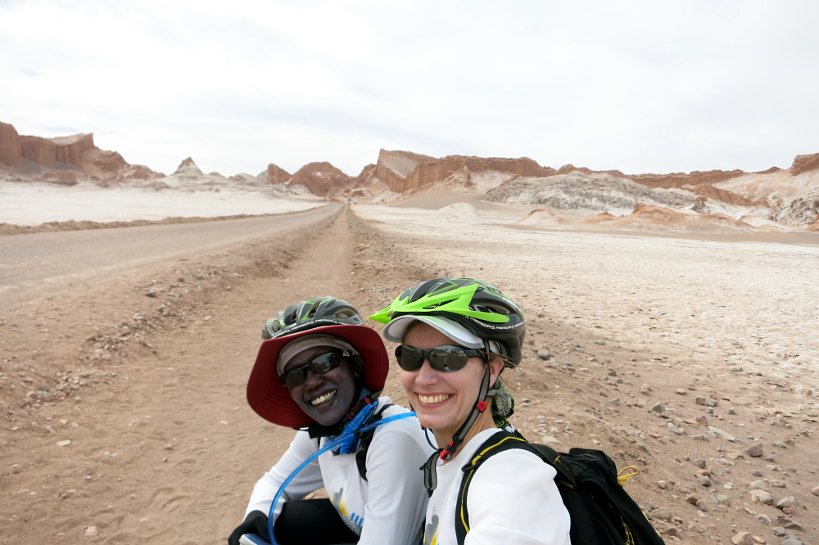 On the road at Valle de la Luna

Food of The Desert

While you may not think of the desert as having food specialties, there are some surprising specialties we learned about and experienced. We found out about the 3 Chilean food specialities that we highlight here from three main sources: visits to the farmers market, recommendations from locals and asking local cooks at restaurants.  Please note, there are other specialties that are in the Andes region and that we wrote about when we visited the North of Argentina such as: llama meat, quinoa, lucuma and papas andinas (native purple potatoes). The Northern part of Chile and Argentina (including Bolivia) all share a border and the Andean culture. Our goal here is to highlight and bring awareness to the Chilean desert food specialities unique to the region.

This dish is native to the Atacama people (indigenous people of the Atacama desert and altiplano (high plain) region). It is a hot soup or stew that is made of corn, potatoes, pork, beef and onions. The most interesting part about this meal is the type of corn used. This dish is made with the white capia variety that is unique to this region. We had patasca at Las Delicias de Carmen restaurant which specializes in authentic Chilean cuisine. 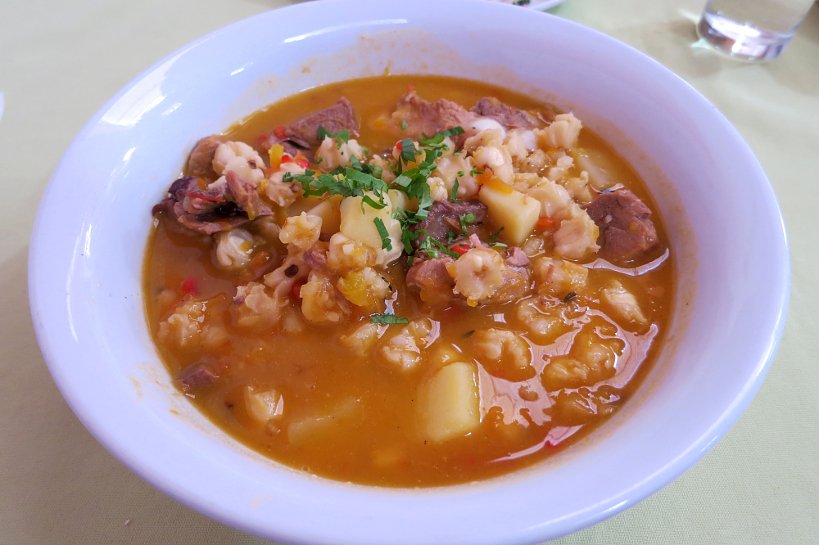 The ingredients in the Patasca really stand out. The dish is slow cooked allowing the beef and pork to fall off their bones. The word Patasca refers to “broken corn” which is a reference to bloated kernels of corn which swell and burst open while stewing.

Although a soup for a Chilean desert food might seem counter intuitive, it s the perfect remedy for the cold desert nights. You will not see this dish everywhere, so head out to Las Delicias de Carmen to try it.

We also had the opportunity to spend some time chatting with Carmen, the chef and owner and learned how she prepares the Patasca and about other specialities of the region. 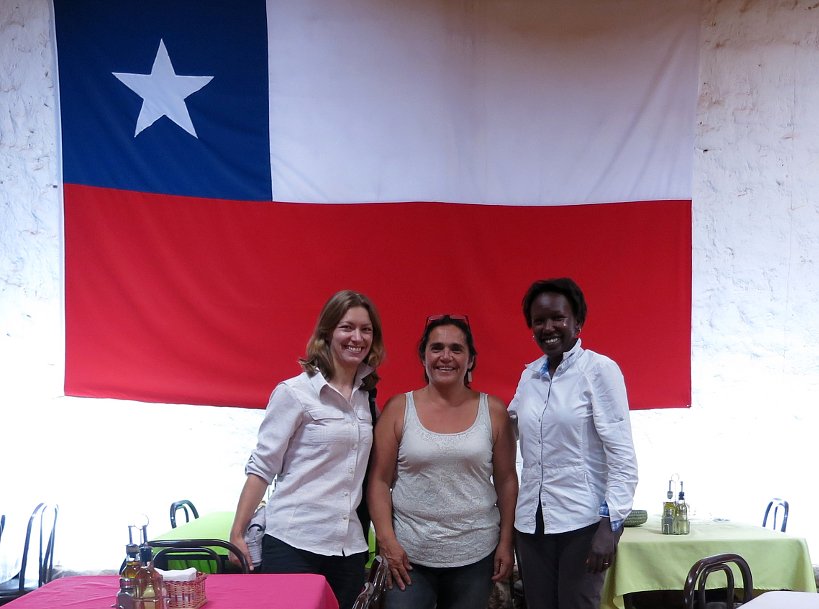 Rica Rica is an antiplanic medicinal herb that grows abundantly in the Andes highland north of Chile and into Bolivia. This herb is characterized by its aroma, strong essence and medicinal properties. It’s scientific name is “phil deserticola Alcantholippia” and belongs to the Verbenace family.

It is known to be a local homeopathic remedy for treating an upset stomach as well as problems of the heart, kidneys, altitude sickness and circulation of the blood. 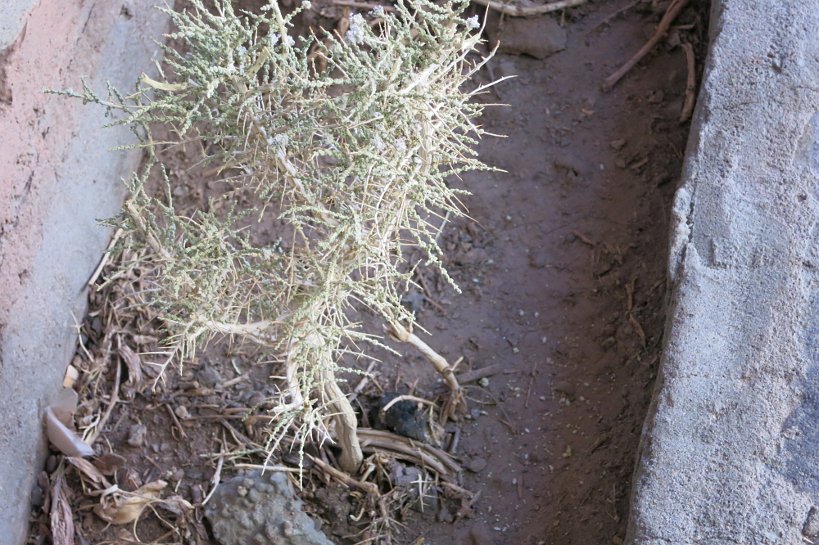 Rica Rica is most often consumed as a tea, ice-cream and pisco sour. We had it as a tea when we first arrived to San Pedro de Atacama to adjust to the high altitude (2,407 meters). We enjoyed rica rica ice-cream to cool off from the heat. And we had the rica rica pisco sour which we highly recommend. 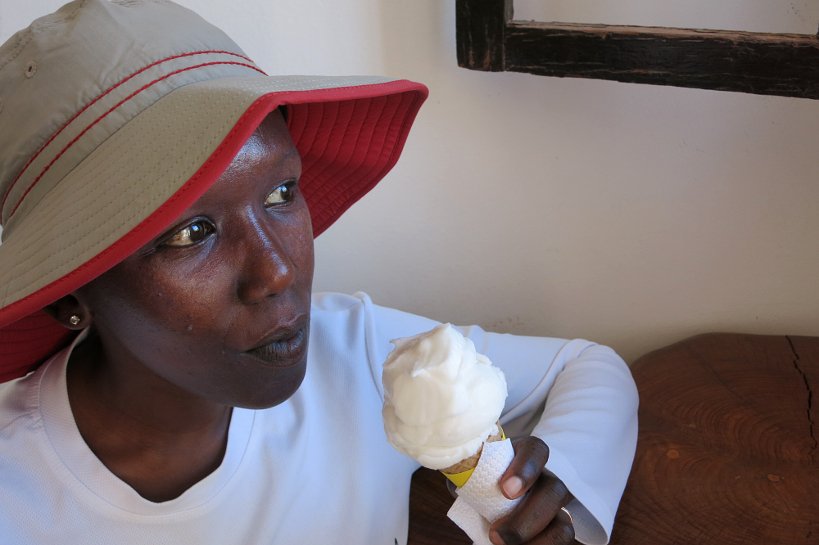 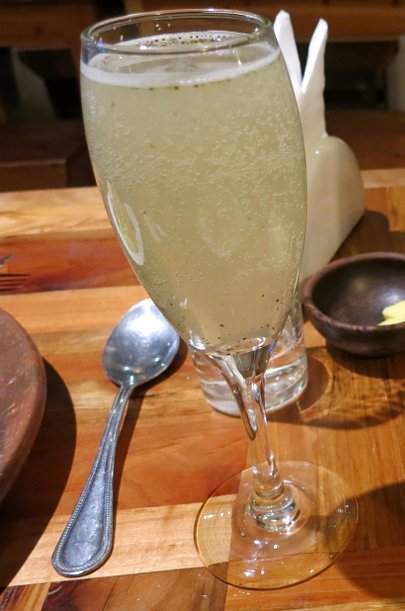 We discovered this unique fruit on our visit to the farmers market and immediately asked about it. We were told it was a pepino dulce  or Apple Melon or Melon Pear in English. It is native to Andean region, including Chile and Peru. The name pepino was given by a Spanish explorer who first saw the fruit in Peru. Pepino is Spanish for cucumber. The fruit is related to the solanaceae family, that includes potato, eggplant and other products. 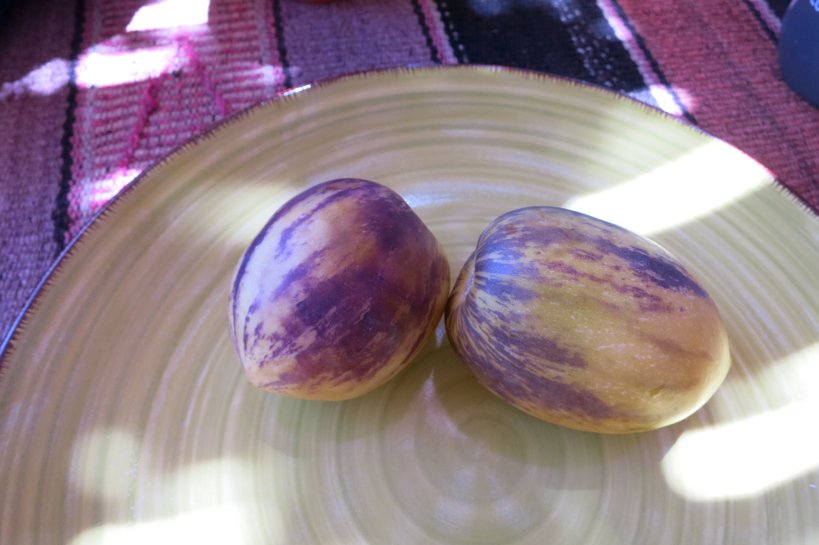 The fruit is oval shaped and has yellow with purplish stripes. The skin is thin and the flesh is yellow, juicy and soft. We enjoyed the fruit and found it really refreshing in the heat. It tasted like a blend between a melon and a pear. When cut open the center of the fruit has many flat, round and edible seeds.  Sweet and juicy, this is a Chilean desert food and an experience not to be missed. 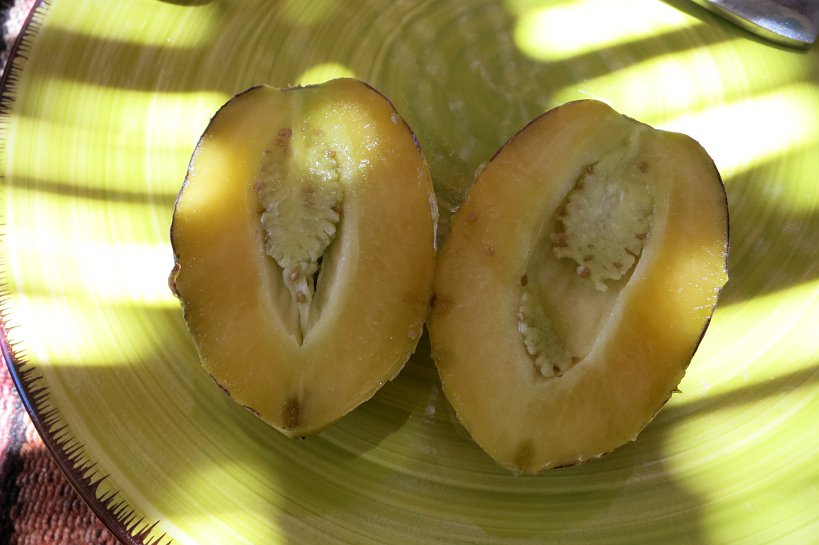 Chile is a surprising culinary destination. On our quest, we discovered local and authentic specialties as we journeyed all the way from the south to the north of the country. The local Chilean dishes and unique Chilean drinks vary in different parts of the country.

The food specialties are unique and dependent on the natural climate of each specific region. We now understand why there is no single defining dish of Chile, but rather several local specialties.

If you are planning a visit to Chile, San Pedro and the Atacama Desert are a must-see stop. Beyond the natural and surprising landscapes, the unique Chilean desert food is not to be missed.

Put Chile on your travel map and be prepared to be surprised!

Sign up for our monthly newsletter and get your free ebook on The 5 Best Ways to Find Authentic Food While Traveling.

Traveling throughout Chile? Book a tour and see more of the diverse country. Click below to book online.

Powered by GetYourGuide. Become a partner.