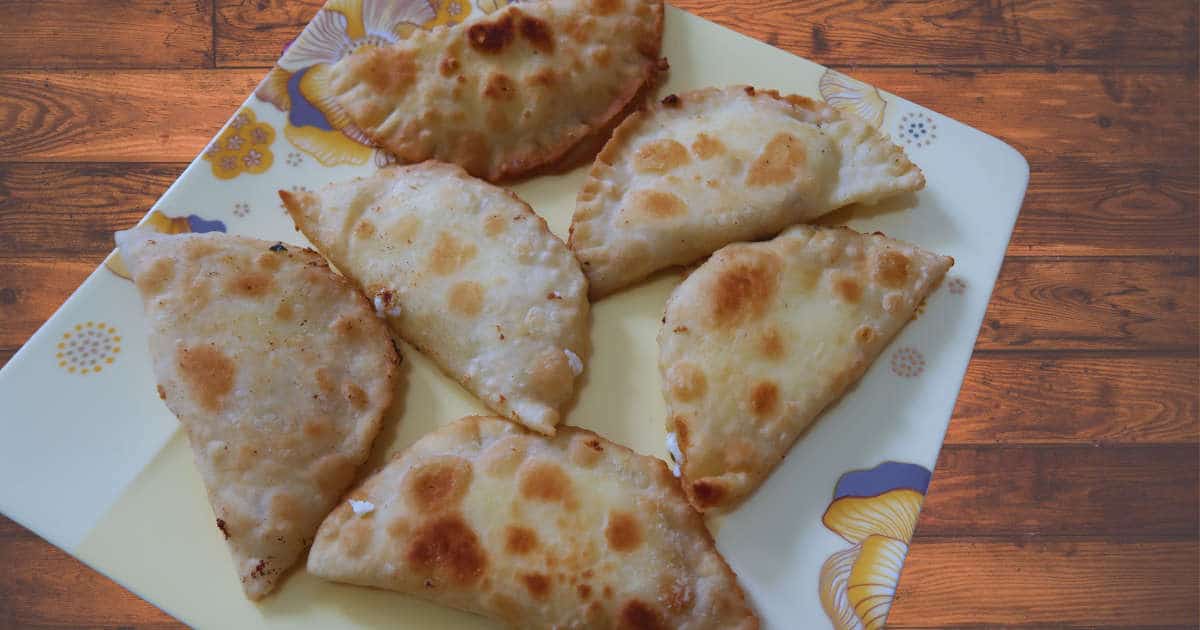 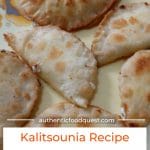 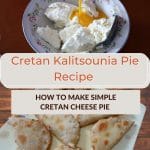 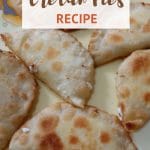 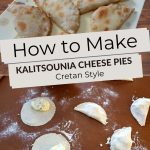 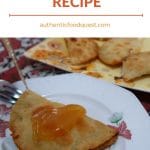 This kalitsounia recipe is for much loved Cretan cheese pies found all over the island of Crete. While there are different kinds of Cretan pies, this recipe focuses on the ones from the region of Chania. These delectable Chania kalitsounia cheese pies are phyllo pastry treats filled with Cretan cheese, herbs and fried or baked to golden perfection.

What is Kalitsounia or ​​Kαλιτσούνια?

Kalitsounia are traditional Cretan pies found all over the island. They are traditionally eaten as an appetizer, snack or drizzled with Cretan honey for dessert.

These loveable Cretan pies come in different shapes with various fillings.  They can be semicircular or crescent shaped or presented in a square or rectangular form.

The filling can range from sweet to savory depending on which region you are in on the island.

Similarly, the way these Cretan pies are prepared also varies. In the old days in the villages, these little cheese pies were fried in olive oil.

This continues to be the traditional way of cooking kalitsounia cheese pies and the preparation method we recommend in this recipe.

Baking these delightful Cretan cheese pies is another popular way of cooking kalitsounia. Especially, if you plan on making a lot of kalitsounia pies to freeze and keep some for later.  Also, the version of kalitsounia stuffed with spinach is better baked in the oven.

Kalitsounia, the small Cretan local specialty pies are found all over the island in both sweet and savory versions.

The origins of these distinctive Cretan pies are unclear as every region of Crete has its distinct way of making them.

Traditional kalitsounia pies are made following village recipes which emphasize the use of local Cretan products.

In the case of Cretan cheese pies, locally available cheese, herbs and flour are combined to make these wonderfully delicious treats.

Regardless of how the Cretan cheese pies came to be, they are an iconic Cretan food that must be savored.

RELATED: Food in Crete – Your Guide To The Best Authentic Food On The Island

One of the first things that caught our attention while visiting bakeries in Crete were the Cretan kalitsounia pies.

At almost every bakery we visited, these little pies were displayed prominently by the cashier covered in a glass dome.

Our first stop in Crete was in Heraklion, the island’s capital city. Tempted by their unique star shape while buying bread, we bought some kalitsounia for dessert.

The sweet cheese pies wrapped within a golden brown delicious crust captivated our taste buds. From then on, they became our go-to local dessert in Iraklio.

Later, when we moved to Chania region, we were surprised to find the Cretan pies bearing the same name, in a savory version.

The first few we tried were the Cretan cheese version and shortly thereafter the Cretan spinach pie versions.

Delighted to discover the savory versions both fried and oven baked we quickly became addicted to these lovable Cretan pies.

With this simple kalitsounia recipe, we hope to give you a taste of magical Crete. A delicious way to make these traditional Cretan cheese pies at home.

Kalitsounia Recipe – How To Make Cretan Cheese Pies at Home

These Cretan cheese pies are incredibly easy to make at home. The key to authentic Cretan kalitsounia is the use of high quality Greek or Cretan ingredients and fresh vegetables.

For Cooking the Kalitsounia

How To Make The Kalitsounia Dough

We share here our recipe to make phyllo dough from scratch using only 5 ingredients.

Use Greek organic phyllo dough – If you don’t want the hassle of making phyllo dough, you can have some delivered to your home. The Fillo Factory makes organic fillo dough for all your delicious Greek recipes.

Use an Adjustable Rolling Pin – Once you make the phyllo using our recipe above, use this adjustable rolling pin to evenly flatten your dough. The adjustable rings make it simple to roll the dough to your desired thickness.

Make Dough With Marcato Atlas Pasta Machine – Considered the “Ferrari of pasta machines”, this world famous pasta machine from Italy can make your kalitsounia dough and much more.

AUTHENTIC FOOD QUEST RECIPE: Use your leftover phyllo dough to make another Cretan classic The Boureki Recipe From Chania, Crete

Mizithra, a local cheese, is typically used to make kalitsounia Cretan pies in Chania, Crete.  It has a slightly sour taste with a consistency similar to ricotta cheese.

You can order mizithra cheese from Amazon and you can have it delivered to your home.

If you cannot find mizithra cheese for the Cretan cheese pies, use a mix of both ricotta and feta cheese in equal proportions.

There is a technique for folding the edges of the kalitsounia Cretan cheese pies. To seal them like a local Cretan, use a pastry wheel for an even design. Alternatively, you can also use a fork to press the dough and seal it before frying.

During our stay in Chania, Crete, we learned that kalitsounia Cretan pies were traditionally fried in the villages.

Frying kalitsounia in extra virgin olive oil still continues to be a popular way of preparing these Cretan specialty treats. Particularly, when you want to cook a few and have them ready quickly.

Kalitsounia cheese pies baked in the oven are also widespread throughout Chania. The baked Cretan pies are great if you are making larger quantities.

In Crete, many families bake several batches and freeze them. When they have guests, they simply pull them out of the fridge frozen and bake them directly for a tasty welcome treat.

One of the most delicious ways of eating Cretan kalitsounia cheese pies is with Cretan honey drizzled on them.

This is a typical snack or dessert eaten mostly at home. Cretan honey also known as thyme honey is famous worldwide for its aromatic flavors.

The combination of the honey floral aromas on fresh fried cheese pies is absolutely heavenly.

Once you make this kalitsounia recipe, you have to try them with honey.

RELATED: Why Thyme Honey From Crete Is One of The Best in The World

Place the cheese in a bowl and crack one egg into the cheese mixture. Mix well using a fork or spoon. Once the egg and cheese are blended together add a pinch of spearmint.

After rolling out the dough, use a cookie cutter or small round tupperware about 4 inches in diameter to cut out the circles. Scoop up one tablespoon of the cheese mixture and place it in the center of the circles. Use a pastry wheel or fork to seal the edges of the cheese pies kalitsounia.

Once all the kalitsounia Cretan pies are stuffed and sealed, fry them in Greek extra virgin olive oil. Once the pies turn golden brown, remove them from the frying pan. Place them on a paper towel and let the oil drain as you cook your next batch.

For Cooking the Kalitsounia

All in One Sauce Pan

17 of The Best Things To Do in Chania, Crete For Amazing Memories

Bougatsa Recipe: How To Make Chania Style Bougatsa From Crete

The 10 Best Greek Cookbooks For a Worldly Kitchen