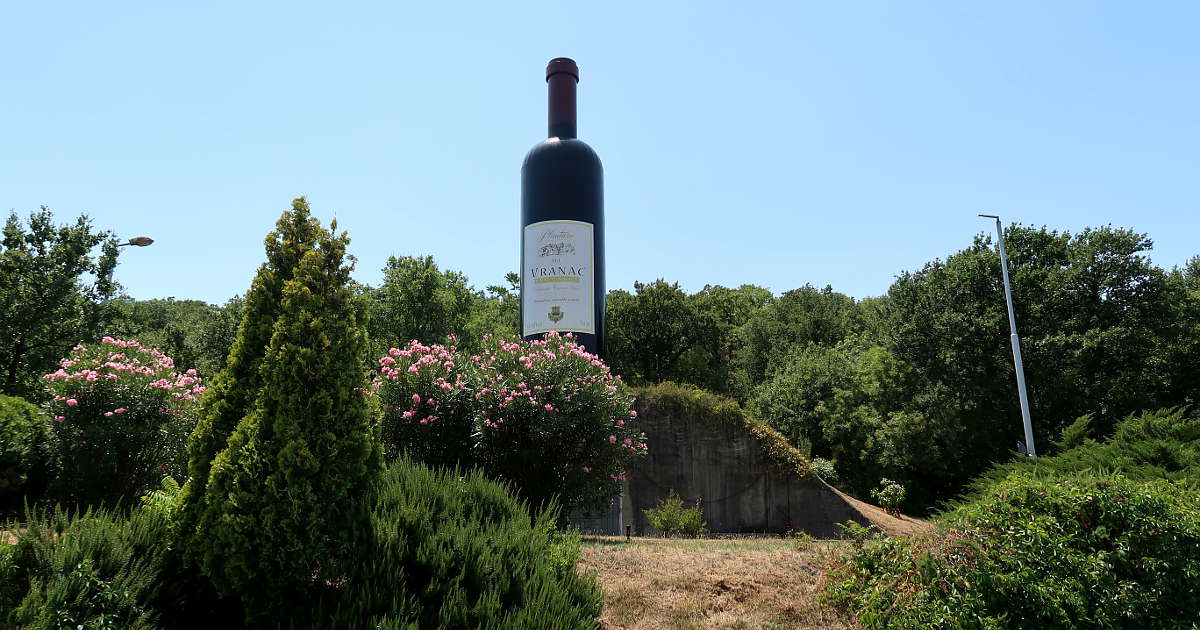 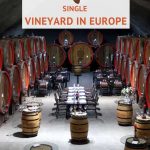 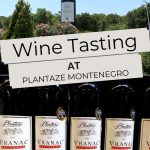 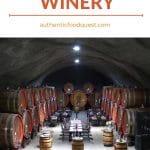 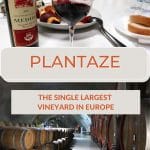 Can you believe Plantaze Montenegro is the largest vineyard in Europe?

Located in one of Europe’s smallest countries, we would have guessed the vineyard would be located in either Italy, Spain or France.

Montenegro has a rich history in wine production with varieties of grapes not found anywhere else in the world.

Our first experience with Montenegrin wines were the wines from 13. Jul Plantaže, the country’s largest wine producer.

At dinner on our first night in the capital, we sampled Plantaze indigeneous wines served in cute 187 ml mini wine bottles.

Impressed with the wines and their status as Europe’s biggest vineyard, we wanted to learn more.

Fascinated, curious and intrigued we visited Plantaze winery to discover the cellars and the wines.

As the largest winery in Montenegro, the presence of Plantaze wines can be felt everywhere.  At restaurants, cafes and grocery stores, Plantaze has a commanding presence.

The winery is located close to Podgorica, about 15 minutes south of the city by car. The Ćemovsko Polje vineyards are visible from the airport, all the way to Lake Skadar and almost up to the border of Albania.

What is particularly impressive about this winery in a small country is that it is the largest single vineyard in Europe.

Guiding us on our visit to Plantaze winery was Jovana Stojanović from the Marketing Department and Bojan, the Sommelier.

The winery, whose official name is 13.jul-Plantaže, covers an area of 2310 hectares in one single plot vineyard. The area covered, we learned, is larger than the size of the capital city, Podgorica.

Plantaze winery produces between 15 to 16 million liters of wine per year with about 70% dedicated to Vranac grape, the crown jewel.

The grapes are harvested by hand, and importantly, Plantaze winery does not produce any bulk wines.

Beyond wine, Plantaže also produces its own olive oil, peaches and farm-raised trout.

Plantaze Montenegro has three wine cellars and our visit was to their main wine cellar, Šipčanik.

The Šipčanik wine cellar has an unusual story which we learned about while touring the premises.

Located underground, the cellar was once a secret underground hanger for military planes in the ex-Yugoslavia.

It housed about 38 military aircrafts and was partially destroyed by NATO bombs in 1999.

In 2007, shortly after Montenegro declared independence from Serbia, the hangar was restored and transformed into a wine cellar.

Plantaze winery, which is half owned by the government, uses the Sipcanik wine cellars for maturing and aging the wines.

The wines are stored about 30 meters below ground within a spiral tunnel over an impressive 356 meters in length.

Year-round natural temperatures of 17°C – 19°C (62°F – 66°F) provide the ideal conditions for aging the wines. The space is also used for wine tastings and events.

AUTHENTIC FOOD QUEST TIP: If you would like to visit the Šipčanik wine cellar from Kotor, Budva, or Tivat, take a Montenegro wine tasting tour. With transportation provided, you can enjoy a leisurely full-day wine tasting at Plantaze winery and another family-run winery. Included in the tasting are Montenegrin cheese, bread, olives, ham, and more. Click to get more information about a Montenegro wine tour experience.

Montenegro has a rich history in wine making which experts date back to the pre-Roman period in the 2nd Century AD.

When the Romans arrived after the Illyrian Wars, wine’s prominence within Montenegro grew steadily.

Viticulture in Montenegro went through many changes over the years, shaped by the local conditions.

However, political leadership influenced growth. During the Ottoman period, many vineyards were destroyed.

And, it wasn’t until the reign of King Nikola Petrović (1860–1918), that grape growing flourished once again.

It is said, King Nikola issued an order requiring every adult man who wanted to marry to plant between 100 to 1000 vines. More so, if he came from a viticultural region of the country.

And, apparently, those who planted 2000 vines were exempt from paying taxes at the time,

And, modern wine making in Montenegro really started with the founding of Plantaze winery in 1963.

And, Krstač, a local white variety grape that grows exclusively in Montenegro and nowhere else in the world.

The most famous Montenegrin native grape is the Vranac, a distinctly black grape that gives intense and full-bodied red wines.

Vranac, which is pronounced Vrah-nahts, also goes by Vranac Crmnički or Vranac Crnogorski in Montenegro.  It is also grown in North Macedonia where it is spelled Vranec.

Vranac is also produced in Serbia, Kosovo, Herzegovina and Croatia.

The name Vranac translates to “dark horse” which are associations for strength, potency and success.

In the Slavic language, “vran” means black or dark and sometimes Vranac is also referred to as black wine.

Vranac, Montenegro’s autochthonous grape varietal since ancient times accounts for more than 70% of all wine production.

As we settled into the wine tasting part of the visit, Bojan talked about the climatic conditions and wine production processes.

While sampling the wines, we explored the aromas and tastes with a plate of traditional Montenegrin foods.

Gastronomic specialties of Njeguski prosciutto or Njeguska ham, along with Njeguski sir, a hard cheese and trout from Plantaze accompanied the wines.

Plantaze Vranac wines are award winning wines and account for about 70% of all the grapes produced by the winery.

At the tasting we tried Premium Vranac, Vladika and an intriguing Medun sweet wine made with 100% Vranac grapes.

Vranac, a close relative of Primitivo and Zinfandel wines, is a wine we enjoyed regularly in Montenegro. It was one of Claire’s favorite Montenegrin wines.

At Plantaze winery, Vranac is first aged for 2 years in stainless steel tanks and then placed in oak barrels for additional aging.

Vranac wines are soft and silky with an intense ruby color. They are round and easy to drink, go perfectly with ham, cheese and grilled meats dishes.

Vladika, a Plantaze premium red wine, quickly became our favorite wine at the tasting. A 2018 blend of Vranac (80%) and the remainder split between Cabernet Sauvignon and Merlot.

Dark ruby red in color, the wine is aged in oak barrels for at least 2 years or longer.

With its deep luxurious and fruity blackberry flavors, it pairs well with meats like Bojan’s favorite, lamb cooked under the bell.

Even though we didn’t have Vranac Pro Corde at the tasting, it is one of the Plantaze best selling wines.

Pro Corde, which means “for the heart” in Latin, was my favorite Plantaze wine and one we enjoyed with most meals.

Vranac Pro Corde, made with 100% Vranac grapes is made using special technology that increases antioxidants during maceration.

The increased levels can bind free radicals and can protect the cardiovascular system.

While the “good for the heart” messaging was appealing, I was really drawn to the dry, full-bodied yet fruity aromas.

The high-quality wine along with the attractive price point of about €5.50 (approx $6.50) makes it a wonderful everyday wine.

After tasting a selection of Vranac red wines, we were surprised by Medun, a dessert wine made with 100% Vranac grapes.

This wine is only produced in the years when the weather is favorable. And, it is made from party dried Vranac grapes, late harvest in limited quantities.

We both liked the exquisite rich aromas of Medun. A delightful digestive after a hearty Montenegrin meal.

The emblematic white wine from 13.jul-Plantaže is the indigeneous Krstac wine. We had tried Krstac wine before visiting Plantaze winery and we appreciated it even more with the additional context from Bojan.

The Krstac or Krstač grape variety grows exclusively in Montenegro, around Podgorica. And, we learned that it gets its name from the grape clusters which are shaped like a cross.

The wine which is yellow in color is aromatic with minerality from the limestones. The wine is delightful and clean with floral and herbal notes.

It makes for a lovely Summer wine and a complement to any of the Montenegrin fish and cheese dishes.

Plantaze winery is open every day of the week for wine tours and tastings. Wine tours are offered in various languages including English and Montenegrin.

There are several tour packages available for individual visits or large group visits.  All the tastings include a tour of the Šipčanik wine cellar and a guided tasting with a sommelier.

Premium wine and food tours are also available. These tours include wine tastings of the Plantaze premium wines and food pairings with Montenegrin dishes. Prices for the premium tours range from €50 to €65 euros.

If you are traveling with a group of 5 to 10 people, you can contact Plantaze in advance for customized premium food and wine tastings.

If you want the convenience of having everything organized for you, click to book your visit to Plantaze winery.

On any visit to Montenegro, the presence of Plantaze will inevitably play a role in your experience.

The stunning Ćemovsko polje vineyards that run from the Adriatic Sea next to Lake Skadar are unmissable. And it is mind blogging to make sense of this beautiful vineyard as a unique single complex.

With Plantaže wines appearing on every menu, you will no doubt taste a range of wonderful Montenegrin wines.

A visit to Plantaze winery is highly recommended. Dive deeper into the indigeneous grapes and experience the scale of the beautiful Ćemovsko polje vineyards.

What surprised us most about Plantaze wines was the quality of the wines. In general, the wines, especially the Vranac, Vranac Pro Corde and Krstac cost no more than €6 (approx $7.0).

Plantaze Montenegro wines are well made with the red wines aged in oak barrels. Similar wines of this quality in the US can range more than double in price.

Plantaze wines can be found all over the world. Whether or not you are traveling to Montenegro, we highly recommend seeking out their wines. The Vranac wines are surprisingly good and light on the wallet.

In the United States, the wines can be found in the surrounding Chicago and New York areas.

Have you had Montenegro wine or Plantaze before? Please let us know in the comments below.

Bulgarian Food Guide: What You Should Know and Love

Easy Lutenitsa Recipe: How To Make The Best Bulgarian Spread

French Wine Club Review – Is SomMailier Wine Club Worth It?

Special thanks to Plantaze Winery for having us on this wine tour and tasting. All views and opinions expressed are our own. Full bellies and happy taste buds too!