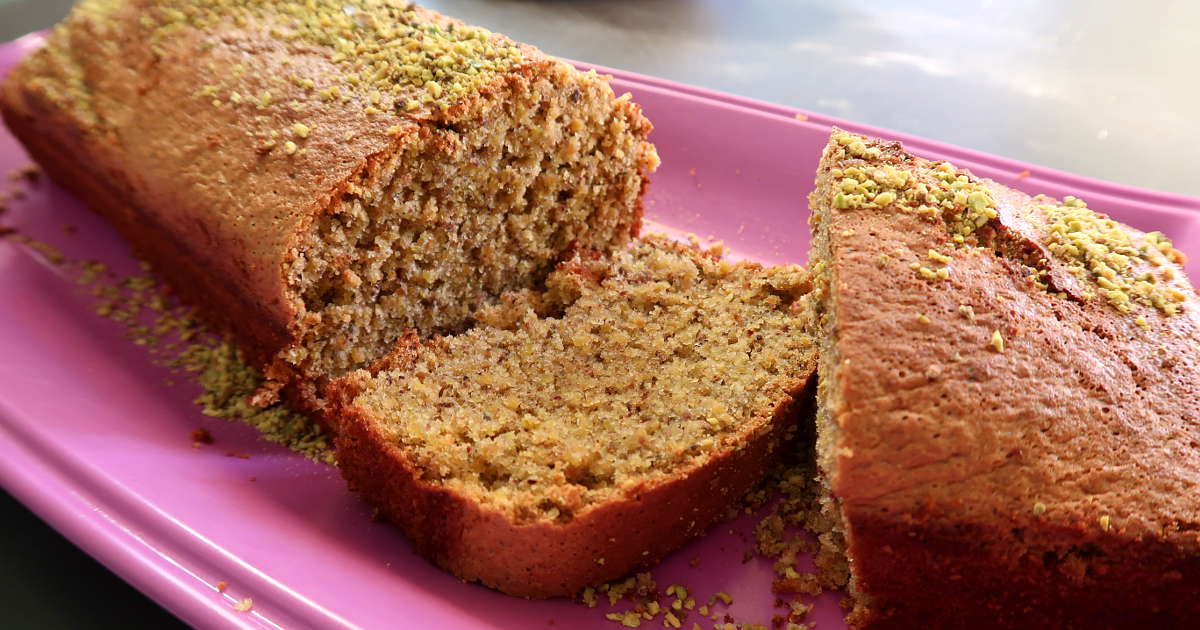 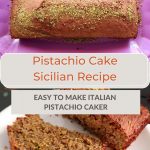 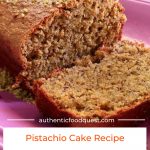 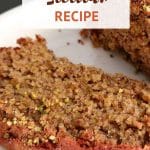 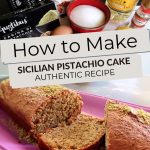 This made from scratch Sicilian pistachio cake recipe with pistachio flour and lemon peel encloses the warm spirit of the island. Easy to make using just one mixing bowl, you’ll be surprised by its simplicity and goodness. Irresistibly soft and moist, this remarkable Italian pistachio cake brings joy to your table.

What is Sicilian Pistachio Cake?

This Sicilian pistachio cake is an authentic and delicious Sicilian cake that uses one of the most prized ingredients – Bronte pistachios.

Bronte, a town in the province of Catania which is located at the base of Mount Etna is most famous for its pistachios.

In addition to these prized pistachios, this delicious Italian pistachio torte comes together with just a handful of ingredients.

Bake in the oven for about 30 mins and savor the flavors of this traditional Sicilian pistachio cake.

Bronte pistachios are world famous and recognized for their uniqueness. The pistachio nuts grow on Mount Etna’s volcanic and fertile soil giving them a particular color and taste.

The kernel is green in color and has a taste that is much more intense than other pistachios.

So special are these pistachios that in 2009, they received “Protected Designation of Origin” or PDO from the European commission.

Bronte pistachios are a true delicacy and worth trying at least once.

Where To Buy Bronte Pistachio

In Sicily, we saw these pistachios mostly at specialty stores and priced significantly higher than regular pistachios.

Compared to pistachios from California, one of the world’s pistachio producing regions, Bronte pistachios are different.

Known as “green gold” or emerald, Bronte pistachios are smaller, softer and very flavorful. They have an elongated shape with a greenish-purplish colored kernel.

Due to their richly concentrated flavors, they are used in many dishes and especially sweets…

If a trip to Bronte is not in your immediate future, you can find these exceptional pistachio from Bronte on Amazon.

The history of the Sicilian pistachio cake is intricately linked to the “green gold” or emblematic pistachios from Bronte.

The pistachios are said to have been introduced by the Arabs in the 9th century. The plant took root on the slopes of Mount Etna, where the rich properties of the volcanic soils turned out to be an ideal Eden.

The quality of the Bronte pistachios have been recognized since ancient times for their quality and organoleptic properties.

They are far more expensive than those from California and shelled Bronte pistachios can cost more than $50 per pound.

Pistachios are used heavily in Sicilian cuisine. On the sweet side, they are used in pastries, cakes, cannoli, gelato or ice cream, cookies and more.

We didn’t know about the Sicilian pistachio cake until the first time we had it at a cooking class in Catania.

The class was actually a Sicilian pizza-making class, and the pistachio cake was offered for dessert.

The first few bites were heavenly. We both fell in love with the moist, buttery pistachio flavors which were surprisingly not sweet. And, we knew at that moment, we wanted to learn to make the Sicilian pistachio cake.

Deb, our Sicilian cooking class instructor, graciously shared the ingredients and simple recipe. And, a few days later, we were in the kitchen making this Italian pistachio cake.

How To Make Italian Pistachio Cake at Home

The Sicilian pistachio cake also called plumcake al pistacchio is simple to make at home. All you need is just a few staple ingredients to make this irresistible dessert.

In Italy, 00 flour is used in this pistachio cake. It is finely ground soft wheat Italian flour used in pizza, bread, pasta and cakes. You can find Double Zero 00  flour on Amazon or at an Italian specialty store in your area.

If you can’t get your hands on 00 flour, you can use All Purpose flour as a substitute.

Where to Buy Pistachio Flour

Pistachio flour, the star ingredient in this Sicilian pistachio cake can be found at some grocery stores and Italian specialty stores.

The texture is a little more grainy than regular flour and this adds a nice crunch to the cake.

How To Know When Your Italian Pistachio Cake is Ready

Check on the cake baking with a small knife or a toothpick. If the toothpick is clean, your cake is ready.

Turn off the oven and let the cake rest inside the oven for 10 min with the oven door slightly opened.

What to Serve With This Italian Pistachio Cake

This delicious pistachio cake can be enjoyed as is with a cup of coffee or tea. If you want to serve it for dessert, pair it with vanilla ice-cream, or homemade whipped cream.

Our favorite way of eating the pistachio cake was by spreading a layer of pistachio cream on it. We discovered pistachio cream, a spread similar to almond butter or Nutella in Catania, Sicily.

Sicilians love pistachio cream and we quickly fell in love with it too, especially on the pistachio cake.

Whip eggs with sugar until light and fluffy.

Grease cake mold and gently fold in the mixture and bake for about 35 to 40 minutes. 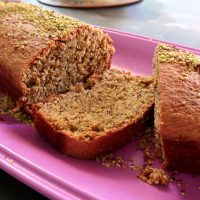 The Best Sicilian Desserts: 12 Desserts in Sicily You Want To Eat

11 of The Best Italian Cooking Vacations for Tasting Italy