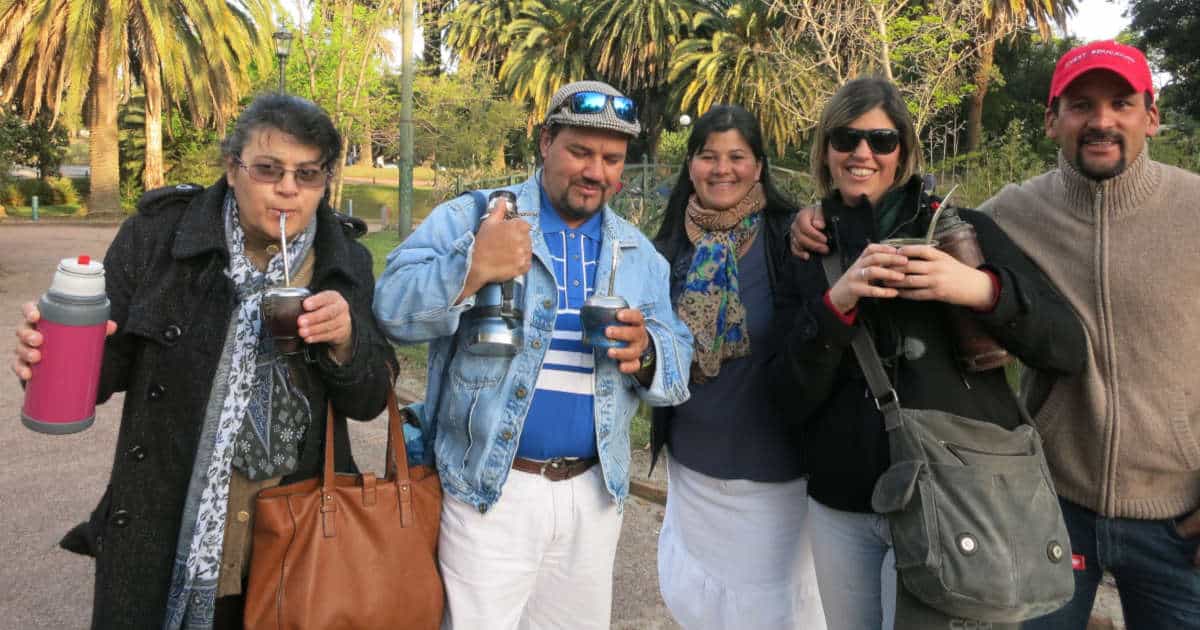 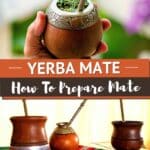 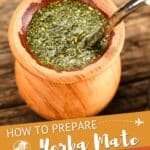 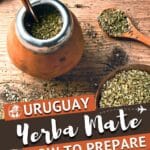 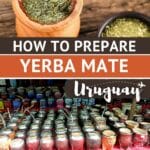 One of the things that has been fascinating to observe in Montevideo, Uruguay, is how obsessive Uruguayans are about mate.

Popular in Latin America, the caffeine-rich beverage is especially ubiquitous in Argentina, Paraguay, and Uruguay.

We had heard about mate when we were in Argentina, but when we arrived in Uruguay’s capital, Montevideo, we were taken by surprise at how much the Uruguayans are drinking mate.

There were pharmacists consuming mate while attending to patients and policemen on duty sipping the popular drink.

Find out how to drink and prepare mate the Uruguay way.

Mate is a drink that is made from the infusion of yerba (dried mate plant) and hot water. “Yerba” is basically dried leaves and twigs from the tree species llex paraguayensis.

It’s like coffee in that it has caffeine, it’s like tea because it is steeped in hot water, but that’s where the similarities end.

Unlike coffee and tea, mate is generally shared and the same gourd and bombilla (metal straw) are used and passed around from one person to the next.

READ MORE: Argentina Drinks Guide: 9 of The Most Popular Beverages You Should Try

Is Yerba Mate Good For You?

Highly nutritious, yerba mate contains Vitamin A and powerful antioxidants that boost immunity and protect against colds and flu.

It is also a diuretic and can be used as a stimulant to reduce fatigue, suppress appetite, and help boost metabolic rate. The caffeine content in yerba mate is in between what one would find in coffee and tea.

The herbwisdom.com blog goes into much more detail about the health benefits including weight loss and slowing the signs of aging.

Mate Uruguayo or Mate in Uruguay

While mate is consumed in several countries in Latin America, Uruguay is the biggest consumer of mate in the world.

Figures indicate that 85% of the population drinks mate daily. Nearly ten kilos are consumed per person per year, resulting in a total national consumption of about 29 million kilos per year.

Not surprisingly, mate is the national drink of Uruguay. It is available everywhere in the country and the aisles in the supermercado or supermarket are impressive.

You will find all different kinds, with many varieties and brands to choose from. There is no shortage of supply for yerba mate in Uruguay.

The mate culture is strong both in Argentina and Uruguay. While there are some differences in the way it is consumed, the two countries share more similarities than differences.

In Uruguay, one of the biggest surprises we observed is seeing people walking around with a thermos flask. While in Argentina, the mate we had with locals was at home with boiling water from a kettle.

The difference between Uruguay mate and Argentina mate is both a combination of the kind of mate used and personal preference.

Carnarias Yerba Mate is one of the most popular brands in Uruguay. And the mate is traditionally consumed with almost boiling hot water, accompanied by sweet cookies like alfajores.

Argentines tend to consume Argentina mate like Rosamonte, which is strong and bitter. A little bit of sugar or at times a hint of ginger, cinnamon, or orange peels are mixed in with the mate herbs.

There is a friendly rivalry between Uruguay and Argentina about mate. And, as mate novices, we prefer to leave the passionate discussion about each country’s mate to the experts.

Where to Buy Mate From Uruguay

You can find some form of yerba mate in most US grocery stores. It’s available in sparkling energy drinks, tea bags, loose-leaf, and even powder drink sticks you can add to water.

If you’d like to try a mate from Uruguay, it is easy to order online. You’ll find Canarias traditional Uruguay Yerba Mate, as well as gourds and bombillas, at Pampa Direct. the largest online South American shop.

Amazon offers a wide variety of mates and complete Uruguayan mate sets. Try Del Cebador for an intense flavor, or Baldo for a traditional cut.

AUTHENTIC FOOD QUEST TIP: For authentic products from South America, we love Pampa Direct. It is the largest online shop South American shop selling direct at affordable prices. You can find everything from mate, to alfajores cookies and snacks, to toys and games.

The cup or mate is both the name of the drink and the drinking vessel. It is made from a dried calabash gourd, that must be “cured” before being used to drink the infusion.

Two things are striking about the mate cups. The first is how widely available they are. Everywhere you look, in stores, and on the streets, there are people selling mate cups of all different types.

The second most striking fact is the unique personalization of each cup. Every single mate cup we saw was distinctly decorated.

We talked to a lady who showed us her cup with the date “2010” inscribed, which she told us was the year her child was born.  A personal date etched onto a very personal item.

The bombilla is a kind of metal straw and is the instrument used to drink the mate. They are generally silver and made of metal.

It consists of a “neck” or tube with a filter (think tea infuser) and a mouthpiece at the end.

The thermos flask is used to keep the water hot for several hours. Apparently, Uruguay developed the use of a thermos flask with a tubular spout, which led to the abandonment of the kettle and the rise of mate consumption on the go.

How To Prepare Mate

To prepare a good mate, the gourd is filled approximately ⅔ with yerba. The yerba is then tilted on one side and a little hot water is added to help place the bombilla. Once the yerba swells, the hot water (not quite boiling) is poured into the gourd to obtain the infusion.

Afterward, the cebador or preparer tastes the first brew before passing it around for everyone to consume.

Once empty, the mate gourd is filled up again with water and emptied again until the yerba is washed out and loses flavor.

AUTHENTIC FOOD QUEST RECIPE: For another emblematic Uruguayan dish, check out our recipe about the Chivito Sandwich, Uruguay National Dish

To be able to dig deeper and understand why Uruguayans walk around clutching their thermos and slurping mate, we went to the experts as well as talked to locals.

Montevideo, Uruguay’s capital, has a museum dedicated to mate. The Museo del Gaucho y la Moneda is located in the Centro barrio or neighborhood at 18 de Julio 998.

Here, we learned about the origins of mate and the different elements used to make mate.

The beautiful, palatial building is divided into two main parts: The Gaucho Museum on the top floor and an interactive Money Museum on the second floor.

The in-depth exposition about mate found within the Gaucho museum was the perfect place to get the back story about mate.

AUTHENTIC FOOD QUEST TIP: If you are visiting Montevideo and would like to explore the city while learning about the local culture, consider taking a private walking tour of Montevideo. You’ll visit the emblematic monuments and learn about the country’s rich culture and gastronomy. As it’s a private walking tour, you can pester your guide with all questions related to mate.

The origins of yerba mate date back hundreds of years to the Guarani Indians of Paraguay, Southwest of Brazil, Northeast of Argentina, and parts of Bolivia and Uruguay.

Legend says an old nomad man was too weak to keep following his tribe and decided to settle down with his daughter, Yarii.

They soon ran out of food. One night, a stranger visited them and asked for food and shelter. The old father and his daughter generously gave away the food they had left.

Surprised by such hospitality, the visitor, who actually was Tupa, the Guaranis’ supreme god, offered them a plant he created to make a special kind of tea.

This tea would ensure they will never be thirsty again and always remain healthy.

He told them to share the beverage with his tribe. Since then, mate has been synonymous with health, endurance, and sharing.

To understand the national obsession with yerba mate first-hand, we also talked to local Uruguayans and asked them why they drank mate.

The one consistent thing we heard from everyone is that it is a “tradition.”

Locals told us that drinking mate with friends is a way of being social. Some also said that mate served as a “pick me up” beverage either in the morning, instead of tea or coffee, or in the afternoon to get through the rest of the day.

One thing that was clear was that every moment spent drinking mate was a celebration of sharing and connecting.

The pride with which they spoke about mate was evident. More than a drink, mate in Uruguay is a lifestyle!

An Ode To Mate Drink

Further demonstrating the importance of mate, here are few words about Mate from the famous Argentinan radio host Lalo Mir.

Being on this food quest in Uruguay, it would have been impossible not to talk about mate. It is deeply rooted in the culture and one cannot miss the shiny aluminum thermos flasks that accessorize every outfit.

Both Claire and I tried mate and needed first to get used to its bitter taste. It does not taste like coffee or bitter green tea. It has a unique taste of herbs and plants. We found it too bitter, until we discovered you can add sugar to it.

The simple act of adding a little sugar made the taste much more tolerable, though it is an acquired taste.

Mate has many benefits and is a powerful source of health and well-being. Outside of Latin America, you can also find mate being consumed in other parts of the world such as Syria, Germany, France, Canada, the UK, Australia, and the U.S.

Mate is a drink and a tradition worth tasting. If you can, choose the traditional drink rather than the newer spritzy versions of the original.

Have you ever tried mate before? Was it mate Uruguay or mate Argentina? Please let us know in the comments below what you thought of it.

A Powerful 30 Day Maca Diet – The Superfood of the Incas

9 Authentic Dishes You Should Not Miss in South America

What Is an Asado? An Authentic Experience in the Pampas of Argentina

12 Of The Best Argentine Grills For Sale – Review

7 Comments on “Yerba Mate Uruguay Way: How To Prepare Mate and Its Cultural Significance”