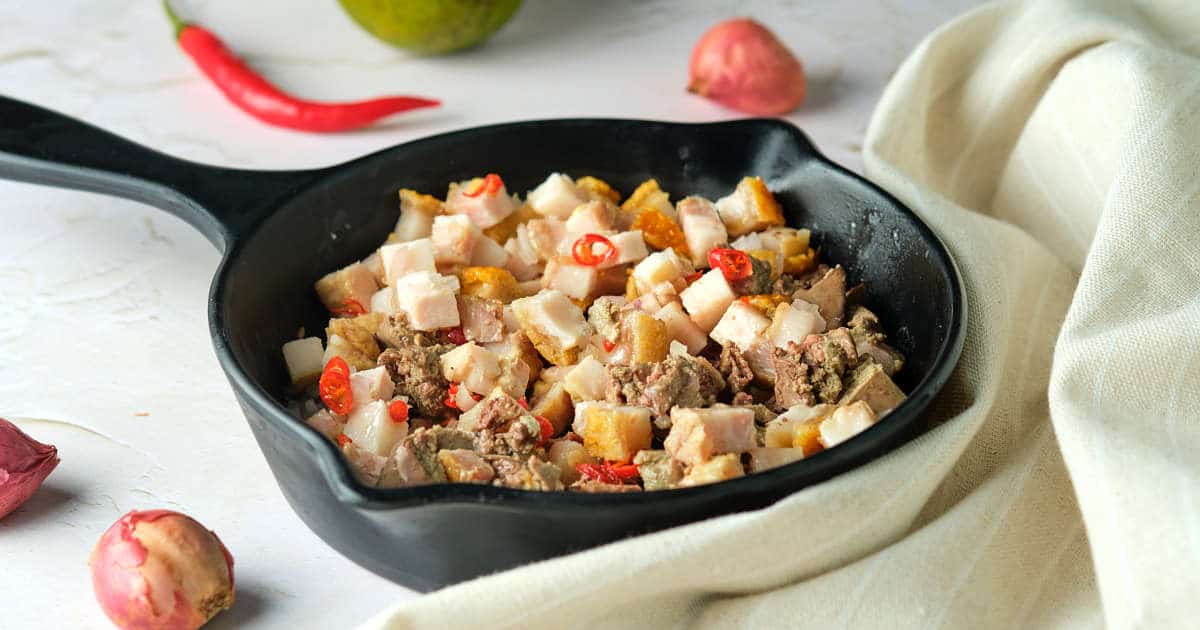 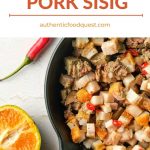 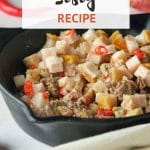 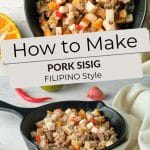 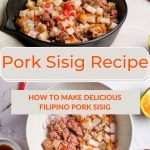 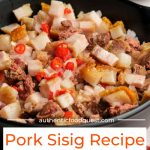 This easy pork sisig recipe is for one of the most popular Filipino foods. A combination of crunchy pork belly, citrusy calamansi juice, soy sauce and chilies will transport your taste buds to the Philippines. In only about 30 minutes, enjoy this specialty bursting with flavors.

What is Pork Sisig

Pork sisig is a humble delicacy from Pampanga, Philippines and now a national and international sensation.

Leaving nothing to waste, this traditional dish uses pork cheeks, head and liver to create a sizzling dish called sisig.

Sizzling sisig, also called spicy sisig, or just sisig, is the most famous Kapampangan dish in the Philippines.

Pork sisig  is made from boiled and grilled chopped pig’s face, cheeks and ears, plus chicken liver.  Then it is  seasoned with soy sauce, calamansi, and chopped chili peppers.

There are many versions of sisig, but pork sisig is the most famous.

Pork sisig is usually served as an appetizer or can be eaten as a meal.

It is a popular drinking food or pulutan, and many claim that it tastes excellent with a cold beer.

This beloved food has earned its reputation as the unofficial national dish for Filipino beer drinkers.

The late Anthony Bourdain praised sisig and described it as the Filipino dish that “will win the hearts and minds of the world.”

What Pork Sisig is Made Of?

Sisig has a combination of savory and fatty flavors coming from different cuts of a pig’s head.

Traditionally, it includes the cheeks, jowls, and snout, with the addition of chopped chicken liver and onions.

It’s sweet and sour flavors from chili peppers and calamansi, a citrus fruit that resembles a lime.

In recent years, the term sisig has been used to describe dishes served on a sizzling plate. And, there are many iterations of the recipe.

For instance, in Manila, sisig is served with an egg, which it would never be in Pampanga. While others have created variations like chicken sisig, tuna or even squid sisig.

However, the original version by Lucia Cunanan, the “Sisig Queen” remains the most popular.

For this pork sisig recipe, we use pork belly and chicken liver which are more easily available. The flavors are similar, just not as fatty.

What is Pork Sisig in English?

The name sisig comes from “sisigan,” an old Tagalog word that means “to make it sour.”

It was first recorded in a Spanish-Kapampangan dictionary dating back to the early 1700s.

At the time it referred to a salad of green papaya or green guava eaten with a dressing of salt, pepper, garlic, and vinegar.

The sourness suppressed the urge to vomit making it a cure for nausea and hangovers.

Why Is It Called Sisig – History of Pork Sisig

The earliest documentation of the word “sisig” dates back to the early 1700s. The records at the time define sisig as anything fermented in vinegar.

The term was generally used to describe a pregnant woman’s hunger cravings for sour food. And over the years it became a favorite drinking food or pulatan amongst the men.

Luciana Cunanan, of Angeles City, Pampanga, in the mid-1970s, is credited to have invented the modern sisig.

Prior to that, US Air troops stationed at Clark Base in Angeles City, played a role in the creation of the dish.

Discarded pig heads and innards not used in preparing meals for American troops were sold cheaply to nearby restaurants.

These discarded pieces were incorporated into sour salads which were served with beers.

Luciana Cunanan adopted this dish and transformed it into a culinary sensation.

At her restaurant Aling Lucing, she added more parts of the pigs head, chicken liver, onions and grilled it for extra crunch.

Served on a sizzling plate, the dish took off and became famous throughout. Locals from Manila would travel all the way to Angeles City, just to bite into the delicious concoction.

This creation by Lucia Cunanan earned Angeles City the title “Sisig Capital of the Philippines.” And, there is even a festival dedicated to the Sisig in Angeles City, Pampanga.

Discovering Pork Sisig in The Philippines

We couldn’t have asked for a better opportunity to experience pork sisig for the first time.

In collaboration with the Philippines Tourism Board, we took a Gastronomic Heritage Tour to the Culinary Capital of Pampanga.

And, on that trip we had the opportunity to meet Claude Tayag, renowned Filipino chef at his restaurant, Bale Dutung.

Chef Tayag specializes in traditional Kapampangan cuisine. His restaurant reached celebrity status when Anthony Bourdain featured it on, No Reservations in 2008.

The culinary highlight on that trip was lechon, or whole roasted pig cooked 6-ways. And, pork sisig was the star.

Prepared in the traditional Kampanga style, the sizzling sisig  was made up of chopped pig’s ear, snout, cheeks, and face, grilled and mixed together with chicken liver.

Prepared as an appetizer, it was served on a sizzling hot platter. And, garnished with chopped onions, chili peppers, and slices of calamansi, a Filipino citrus fruit..

While flavorful and very well prepared, it took us some time to appreciate this Kapampangan delicacy. and textures. The ingredients, especially the pig ears, took some getting used to.

Later, while visiting other regions in the Philippines, we had other opportunities to try sizzling sisig again.

The versions of pork sisig we enjoyed the most were those cooked with pork belly and topped with an egg.

This recipe for pork sisig uses pork belly and maintains the balance of sour, salty and savory flavors that are integral to sisig.

RELATED: The Best of Pampanga Cuisine in the Footsteps of Anthony Bourdain

The flavors are what make pork sisig so special. The calamansi, a small citrus fruit that looks like a lime, adds exquisite flavors.

The texture with the traditional pig ears and parts does take some getting used to. This really depends on one’s familiarity with non-traditional cuts of pork and one’s sense of adventure.

The taste of pork sisig is an interesting mix of sour and sweet flavors from calamansi combined with savory and fat from grilled pork.

Anthony Bourdain described sisg as “casual, accessible, [and] exactly what you need after a few beers.”

In his opinion, “sisig is perfectly positioned to win the hearts and minds of the world as a whole.”

Sisig is one of the most popularly exported dishes from the Philippines. Local and foreign chefs are championing Filipino cuisine on the global dining scene.
For example, Maharlika, a modern Filipino restaurant in New York City, received the  “Best New Food” award from Time Out New York. Sizzling sisig, their speciality  is what draws the people in.

Pork Sisig Recipe – How To Make Pork Sisig at Home

This recipe for pork sisig makes a great appetizer or accompaniment to rice. Using chopped up pork belly grilled to perfection and combined with chilis and citrusy calamansi, bring the tastes of the Philippines home.

Which Pork Cuts To Use

Instead of making this pork sisig recipe using the traditional ingredients of pig ears, snout and cheeks, we use pork belly.

Pork belly, meat from the abdomen of the pig is succulent and richly flavorful. It is perfect for sisig for it’s fatty, yet meaty textures.

Finding pork belly is also available at most butchers and meat stores. It is also easy to prepare and does not sacrifice the flavors of authentic pork sisig experience.

How To Make Crispy Pork Sisig

To give pork sisig its delicious crunchy textures, you can either grill or pan fry the pork.

In this pork sisig recipe, we first boil the pork belly until tender and let it dry.

We then pan-fry the pork belly in a cast-iron skillet until it turns brown and crispy. Once we add the cooked chicken liver and seasonings we cook everything together in butter for even more crispy textures.

The delicate balance between the sweet  and sour flavors is what gives pork sisig it’s unique taste.

The Calamansi fruit, also known as kalamansi or calamondin, is a small citrus fruit used liberally in Filipino food.

The small, round, green and tart-tasting fruit does pack a punch of flavor.

Calamansi juice is available on Amazon and can be shipped directly to your home. Alternatively, you can substitute using fresh lemon or lime juice.

What To Serve With Pork Sisig

Typically in the Philippines, pork sisig is eaten as an appetizer accompanied by cold beer. We enjoyed a version with an egg cracked over the sizzling hot plate.

You can enjoy pork sisig like the Filipinos with a simple rice dish and vegetables.

If you are feeling creative, you can also stuff the pork sisig into tacos for a twist on this Filipino food.

Can Pork Sisig Be Stored and Reheated?

Pork sisig leftovers can be stored in the fridge for up to 3 days if it’s well conserved in an airtight container.

To re-heat this recipe, simply place the container in a microwave or reheat in a pan over medium heat.

You can also freeze this dish to extend its shelf life. Just place it in freezer bags or an airtight container and freeze. Thaw before reheating.

Cook The Pork Belly Until Crispy

Start by soaking the pork belly in water and pineapple juice, until tender, approximately 30 minutes.

Pan fry the pork belly until golden brown and crispy.

Chop up the cooked pork belly and chicken liver and place in a bowl. Mix together with chopped onions, lemon juice, soy sauce and chilies.

Place everything in a skillet and cook with butter. Transfer to a plate or sizzling platter.

Eating Around The Philippines

Cebu Lechon – The Best Pig Ever According to Anthony Bourdain

10 Unique Ilocos Food To Delight on in the Philippines