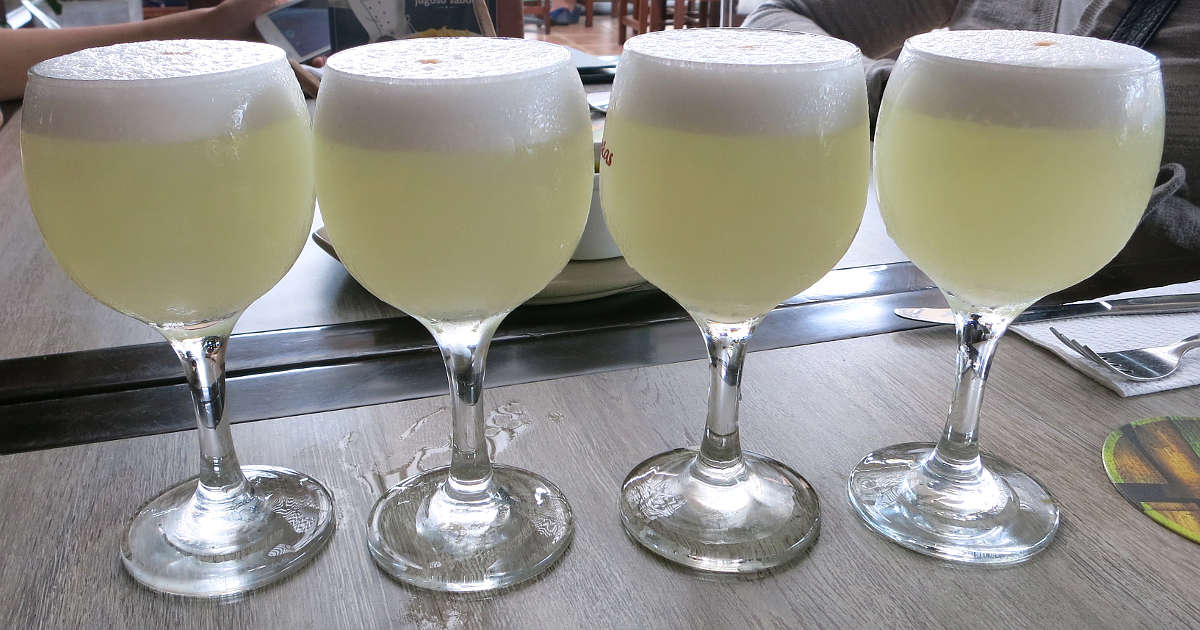 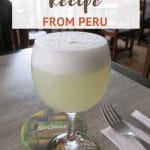 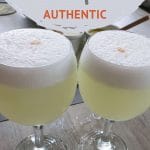 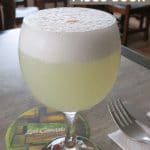 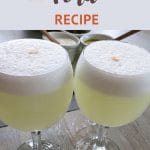 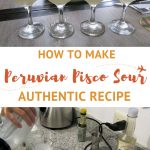 Peruvian Pisco Sour is an elegant and delicious cocktail that combines 5 simple ingredients. Known as the national drink of Peru, this iconic and beloved drink even has its own national holiday; the first Saturday in February.

What is Peruvian Pisco Sour?

As the name suggests, Pisco, a clear grape brandy is the main ingredient in the Pisco Sour cocktail.

This Peruvian cocktail uses Peruvian Pisco as the base liquor and the addition of lime juice, syrup, ice, egg white, and Angostura bitters.

Pisco Sours are delicious and easy to drink. The sweet and tart flavors are complementary making the cocktail quite refreshing.

Be warned though, the alcohol level in a Pisco Sour can be quite strong, starting at about 40%. You want to watch how many you drink as they can knock you off your feet.

Pisco sour cocktails are ubiquitous in Peru. This cocktail is a popular option at happy hour.

As you walk down the streets, you’ll be tempted by happy hour menus. Discounted prices for Peruvian pisco sour or cocktails with pisco abound.

Our first experience with Peruvian pisco sours was in Cusco, our port of entry. Not surprisingly, we had our first cocktails while exploring the historic capital of the Inca Empire.

Just before arriving in Cusco, we had spent time in Chile exploring the local flavors. The Chilean Pisco Sour is also considered Chile’s national cocktail and we were curious to taste the differences.

As Pisco sour novices the differences were not immediately noticeable. Smooth, and tasty, we enjoyed the zesty and refreshing flavors.

Both Peru and Chile claim the Pisco Sour as their national drink. While similar, there are notable differences.

In Chile, Pisco Sour is made with Chilean Pisco, lime juice, sugar instead of syrup, and excludes Angostura Bitters and egg whites.

Regardless of where it was invented or by whom, this cocktail remains a classic and one that should be experienced.

READ MORE: Chilean Pisco Sour – How to Make it at Home

Peruvian Pisco Sour originated in Lima, Peru. It was invented in the early 1920s by American, Victor Vaughen Morris.

A bartender working in Cerro de Pasco, a city in central Peru, he opened Morris Bar in Lima in 1916.

In the latter 1920s, Bruiget altered the recipe by adding Angostura bitters and egg whites, creating the famous cocktail.

READ MORE: How to Visit A Pisco Winery: A Day Trip From Lima To Lunahuana

While the Pisco Sour remains the most popular Pisco cocktail, we were excited to discover the Chilcano in Lima.

The Chilcano, another Pisco cocktail, is a refreshing beverage you’ll find easily in Peru.

Like the Pisco Sour, the Chilcano also uses Peruvian Pisco as the base liquor.

Chilcano’s are not as strong as Pisco Sours and are made with the addition of lime juice, ginger ale, ice and Angostura bitters.

There are many variations of Chilanos. Many use exotic fruits like maracuya or lucuma, perfect for those who like cocktails with a sweeter profile.

READ MORE: 10 Unique Peruvian Drinks To Help You Have a More Local Experience

How To Make A Peruvian Pisco Sour At Home

In Lima, Peru, we shared an Airbnb with Patricia, a local, in the foodie neighborhood of Lince.

Her boyfriend, Enrique, a self-proclaimed Pisco Sour connoisseur taught us how to make Peruvian Pisco Sour one Friday evening.

Before dinner, Enrique laid out the five simple ingredients and we got to work.

While in Lima, we visited one of the oldest Pisco wineries distilleries in the  town of Lunahuana.

On a tour with the owner, we learned about the four main types of Peruvian Pisco.

To make this iconic Peruvian cocktail, Pisco, exclusively from one type of grape varietal is preferred. The most popular is the Quebranta grape varietal. This grape is considered a non-aromatic variety making it perfect for the Pisco cocktail.

Pisco made purely from Quebranta grapes is Puro or Pisco Puro, meaning from one grape variety. This Pervian pisco is intense and complex, and one of the strongest Pisco varietals.

Where to Buy Pisco in The US

Walk into any supermarket in Peru and you’ll find an impressively large range of pisco varieties. Unfortunately, this is not the case in the United States. Despite the growing popularity of Pisco and Pisco Sours, the brands available are limited.

Some of the most popular Pisco brands you’ll find in the US are Peruvian Macchu Pisco, BarSol and Caravedo. From Chile, Capel and Alto del Carmen are widely available.

Depending on where you live in the country, you can have Peruvian Pisco delivered to your home. Alternatively, look for Pisco at the local liquor stores in your area.

Making an authentic Peruvian Pisco Sour is incredibly easy. With Enrique’s guidance, the first step was to separate the egg white from the yolk.

Then place one egg white into a blender and mix it with ice.
The Pisco Sour recipe has 6 part Pisco, 2 part simple syrup, 2 part lime juice, ice all blended together.

Once blended together, pour into four cocktail glasses.

Top the foam on each glass with 3 drops of Angostura Bitters. This indispensable cocktail fixture gets rid of the egg taste and brings forward the Pisco Sour flavors. 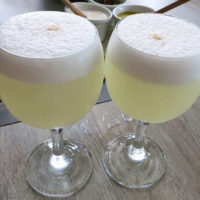 Our book, Authentic Food Quest Peru takes you on a journey through the regional food specialties in Peru. Get an introduction into Peruvian food and the history of how this unique gastronomy came to be.

Discover the authentic foods in Lima and Cusco as well as the top Peruvian foods and drinks that should not be missed. Take this guide with you as you explore Peru’s magnificent cuisine.

Available on Amazon and Barnes & Noble.

10 of The Most Authentic Peruvian Desserts You Want To Know

How to Enjoy Mezcal at El Cortijo in Oaxaca, Mexico

5 Authentic Peruvian Restaurants to Delight Yourself in Florida

How to Taste Amazing Port Wines in Porto

The Most Popular Peruvian Fast Food To Crave For

76 Comments on “How To Make An Authentic Peruvian Pisco Sour”