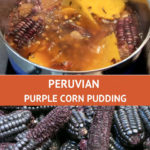 This mazamorra morada recipe is for a delicious and easy to make Peruvian purple corn pudding. A traditional dessert, the star ingredients are purple corn and dried fruits, thickened with cornstarch. Cinnamon and cloves add spicy and tropical flavors to this easy one-pot dessert from Peru.

What is Mazamorra Morada or Peruvian Purple Corn Pudding?

Mazamorra morada, which translates to purple corn pudding, is a popular Peruvian dessert.

The main ingredient is a unique variety of purple corn that grows only in the Andes.

This corn used for thousands of years by the indigenous people, has many health benefits.

The purple corn is boiled in water with dried fruits and thickened into a pudding with sweet potato starch or harina de camote.

Cornstarch or potato starch may be used as substitutes. This delicious dessert gets its flavors from cooking with cinnamon and cloves.

In Peru, mazamorra morada is typically eaten warm, though it can also be enjoyed chilled.

You will always find it served on birthday celebrations.

The Taste of Mazamorra Morada

What we enjoy the most about mazamorra morada is that it is not too sweet.

The texture is like loose jello or thick gelatin.

It is light and fruity and perfect for a cool evening. The deep purple color and cinnamon with clove, give it spiced tropical flavors.

What is Dried Peruvian Purple Corn

Maiz morado or purple corn from the Andes mountains has been cultivated in Peru for thousands of years. It dates back to pre Inca times.

Purple corn was used by the indigeneous people of the region for a variety of purposes.

All purple corn strains originate from an ancient purple corn which is known as kulli sara or moro sara.

Interestingly and mysteriously, purple corn will lose its color when planted outside of Peru.

Long been revered by the indigenous peoples, it is known as “the plant of remembrance”.

Purple corn is considered a superfood or nutrient powerhouse due to its rich antioxidants, vitamins and minerals.

One of the most popular uses for purple corn is in chicha morada, a traditional Peruvian drink, thought to pre-date the Inca empire.

The purple corn is also used in desserts like puddings, cakes, popsicles, sorbets and more. The flour is used to make bread and tortillas.

Mazamorra morada dessert is well liked in Peru and can be found at restaurants, markets, and  street vendors.

While wandering through the streets of Lima, we were always intrigued by street carts selling an unusual looking purple pudding.

One evening, we decided to stop at a friendly looking vendor and ask him about mazamorra morada. Difficult for him to explain what it was, we ended up buying some to taste.

In Lima, eating mazamorra morada by itself is very common. The vendor was also selling rice pudding or arroz con leche, and we tried both.

The two desserts are served side by side and the combination is called “classical” or “clasico.” It is also referred to as sol y sombra or “sun and shade”.

We enjoyed the fusion of flavors and textures. This tasty dessert with deep purple hues, is sure to please.

READ MORE: 7 Authentic Peruvian Street Food You Want To Have

Mazamorra morada, an ancient dessert, is one of the most representative in Peru.

While it is eaten all year around, it is especially popular in the month of October, during the celebrations of the Lord of Miracles.

This sweet dessert evolved through a cultural exchange between the Incas and European cultures.

Originally, this dessert did not include the use of sugar. It was with the arrival of the Spanish in Peru, that it took on new form.

Over time, mazamorra became one of the most consumed desserts, especially in Lima. This gave rise to the popular saying “‘Limeño mazamorrero,” by Peruvian writer, Ricardo Palma.

Today, mazamorra morada, with deep Peruvian roots is found on all tables across the country.

Mazamorra Morada Recipe – How To Make it at Home

This mazamorra morada recipe is a 2-in-1, allowing you to make two Peruvian dishes from one pot of purple corn.

From the first boiling of the dried purple corn, use the water and follow the mazamorra morada recipe below.

With the second boiling of the purple corn, you can make a chicha morada, a traditional Peruvian purple corn drink.

Chicha morada, a refreshing, non-alcoholic drink will add to your tastes of Peru.

This simple mazamorra morada recipe is easy to make at home and can be adapted to your tastes.

Feel free to adjust the amount of sugar used and dried fruits to your liking.

Where to Buy Peruvian Purple Corn

Purple corn, sometimes referred to as blue corn is the star ingredient in this mazamorra morada recipe.

We made this mazamorra morada recipe while in Oaxaca, Mexico and could only find maiz negro or black corn. This endemic corn has grains with both purple and white pigments.

As a result, our dessert did not have the deep purple hues we enjoyed in Peru, although the taste was similar.

Peruvian purple corn from the Andes is available on Amazon.

When you make your mazamorra morada recipe, make sure to choose dried fruits that do not have seeds.

This will make it easier to enjoy the dessert.

While prunes, apricots and peaches are popular dried fruit options, feel free to experiment with cranberries, cherries, blueberries or other fruits of your choice.

Sweet potato starch or harina de camote is most commonly used in Peru.

You can find sweet potato flour at Latin stores in your area, or Amazon. If you cannot find it, you can substitute with potato starch or cornstarch. 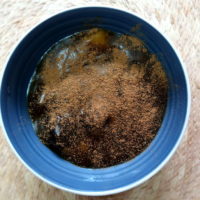 If you lose a lot of water in the boiling process, feel free to make a second batch by adding water to the corn, pineapple and fruits mixture. In addition to sliced pineapple, you can also add quince or apple. Feel free to add your favorite dried fruits as well.

How To Make An Authentic Peruvian Pisco Sour

The 6 Criollo Dishes You Should Eat in Peru

Top 7 Most Authentic Desserts in Argentina