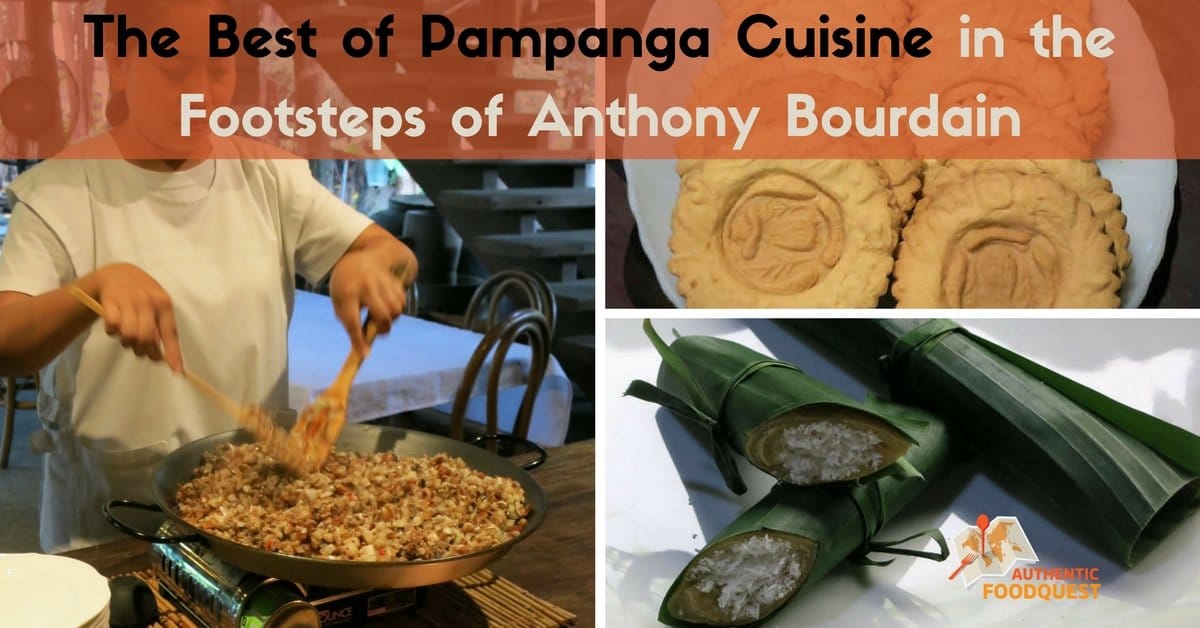 Our quest to discover the authentic dishes in Southeast Asia, took us to Pampanga, the Culinary Capital of the Philippines.

One of the things we were really looking forward to was learning about Filipino food and the national dishes of the Philippines. To our surprise, we learned that this question was not simple, but rather complex based on the cultural heritage and the diversity found on the over 7,000 islands.

The trip to explore Pampanga cuisine was similar to Anthony Bourdain’s journey when he visited the region in 2009.

This trip was made possible by the Philippines Tourism Board, as part of the TBEX Asia 2016 conference we attended.

We took the Gastronomic Heritage Tour at the Culinary Capital of Pampanga, as part of “Pre-Bex” tours offered a few days before the conference started.

Prepare yourself for a delicious culinary journey .

Or as they say in ”Kapampangan” or “Pampanga” local language, Manyaman!

Located about 65 km or 2 hours north of Manila, Pampanga is referred to as the “Culinary Capital of the Philippines.” Not only is renowned for its food, it is also home to the U.S. Clark Air Base, which was once the epicenter of American air operations from the Spanish-American war, WWII, and the Vietnam war.

We had the opportunity to meet with Claude Tayag, one of the Philippines best-known chefs at his restaurant Bale Dutung. The restaurant itself is a work of art made with a variety of old and recycled materials. 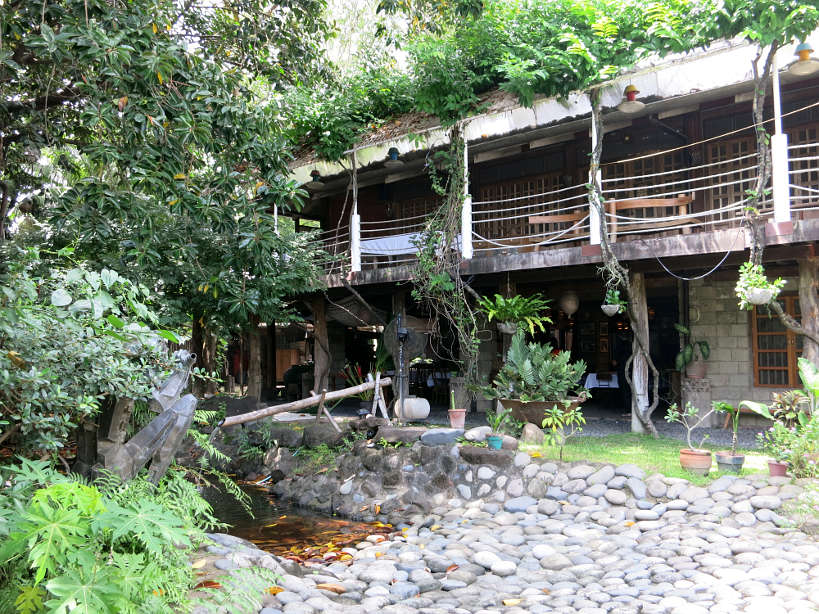 Outside of Bale Dutung restaurant

Understanding the traditional dishes of the Philippines was our mission in Pampanga. In spite of all of the research we had done ahead of time including talking to U.S. Filipino friends , we didn’t feel like we had a full grasp on Filipino cuisine.

We asked this seemingly simple question to Claude Tayag his answer really surprised us.  We were expecting him to talk about a few key dishes, but instead, he talked for over 15 minutes about the historical and cultural influences that have shaped Pampanga cuisine and food in the Philippines.

Claude told us that he calls this idea, a “culinary quilt.”

One thing to note, Claude told us, is that most of the Filipino dishes are named after the cooking method, not the dish itself.

For example sisig, a local Pampanga dish that we talk about below comes in many versions. You can find pork sisig as well as seafood options like squid, tuna, milkfish and more.

The point is, every dish is different and is based on the ingredients used, however, the cooking method remains the same.

“A Filipino dish conforms to the maker, not to a codified recipe.” 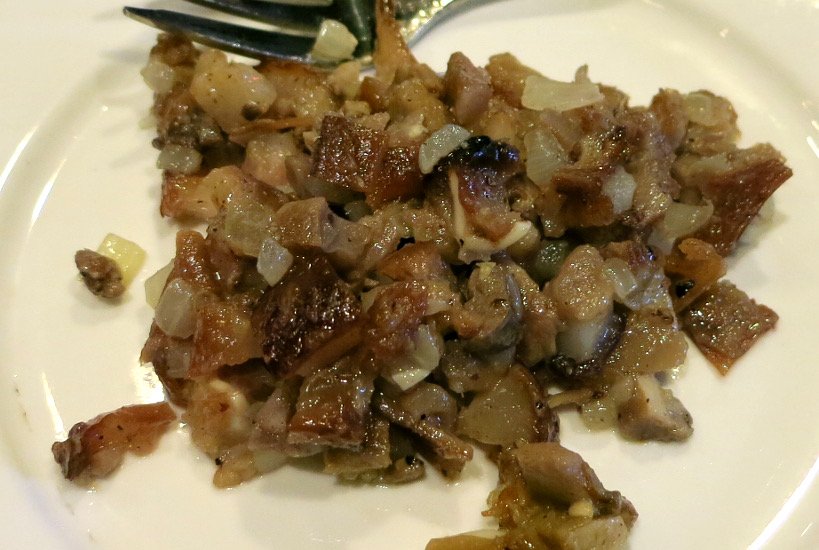 Sisig – One of the Most Famous Traditional Dishes from Pampanga

Sisig, also called Sizzling Sisig, is a dish that is made up of chopped pig’s head parts (face, snout, cheeks, and ear), grilling them and mixing them up with chicken liver. It is usually served on a sizzling platter garnished with chopped onions, chili peppers, chopped onions and slices of calamansi (Filipino citrus fruit).

In the short video below, watch as chef Claude Tayag describes Sisig and the various kinds.

While we were fascinated by the sizzling preparation style, but we have to admit we were not big fans of the dish. Even though it was well prepared, the thought of the ingredients was not very appetizing.

Nevertheless, we recommend trying this Pampanga specialty and opening up to the unique cacophony of flavors and textures.

The background of Sisig is interesting. It was invented in Pampanga in the 1970s by Aling Lucia Cunanan, a restaurant owner, who bought the unused pig heads from Clark’s Air Base, and created this local delicacy. You can find her famous restaurant Aling Lucing, in Angeles City, Pampanga.

Pork sisig is usually served as an appetizer. Popular at bars, many claim that it tastes excellent with a cold beer. It has earned the reputation as the unofficial national dish, for Filipino beer drinkers.

As soon as we walked in this brightly colored small shop-house, we felt we had stepped back in time.

The owner, Ramon Ocampo, introduced us to his family run business. His aunt started the business of making Turones de Casoy and Sansrival in the early 1920’s. She was taught by the Dominican sisters who shared the recipes of these Spanish-inspired sweets.

Before his aunt passed away, she made Ramon promise her to keep the business alive and maintain the cooking traditions and the use of the same exact ingredients. Now a retired teacher, Ramon is training his niece and nephew to take over the business.

The real action takes place at the back of the shop, where workers manually prepare and bake these Pampanga delicacies in the small kitchen. Here they make two traditional sweets: Turones de Casoy and Sansrival. 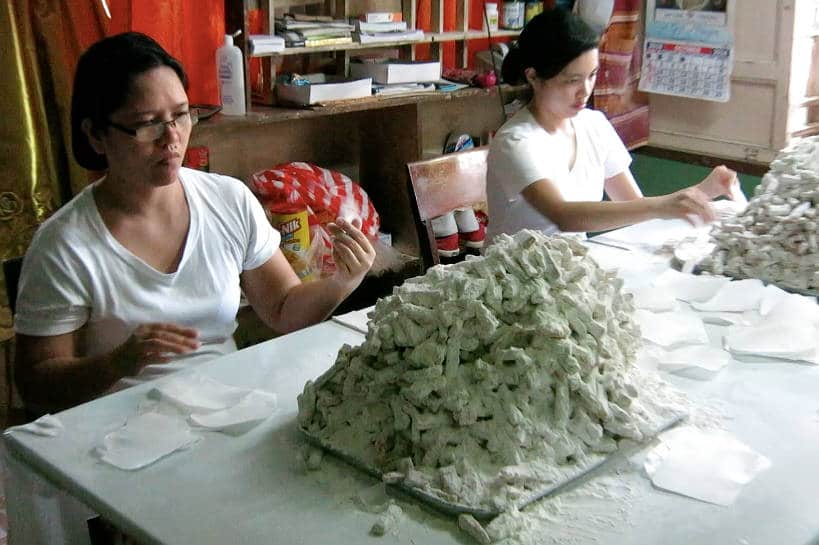 Turones de Casoy are made by hand

Turones de Casoy is made of cashews and honey wrapped to form a rice sheet that you can actually eat. They are quite crunchy and hard to chew.

The tastes is somewhat similar to that of nougat with a cashew flavoring.  As fans of nuts, we enjoyed the cashews immensly. 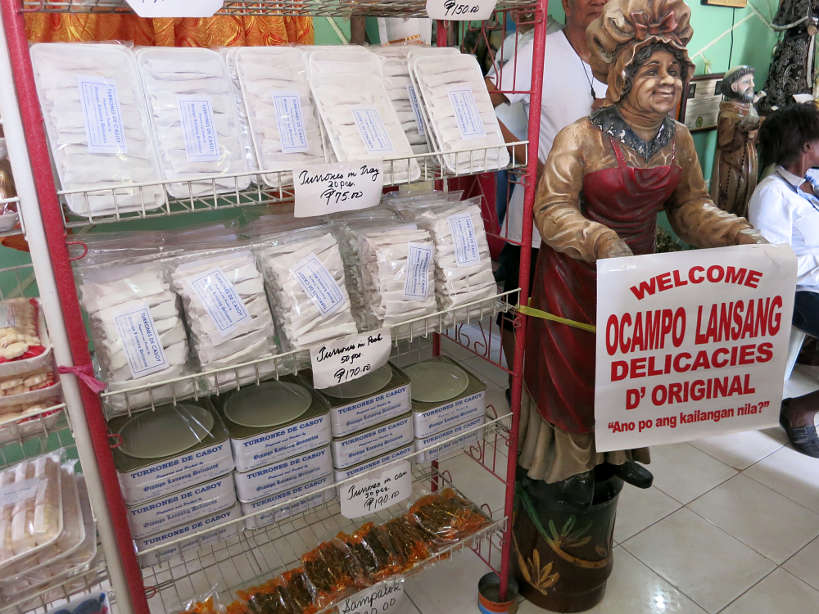 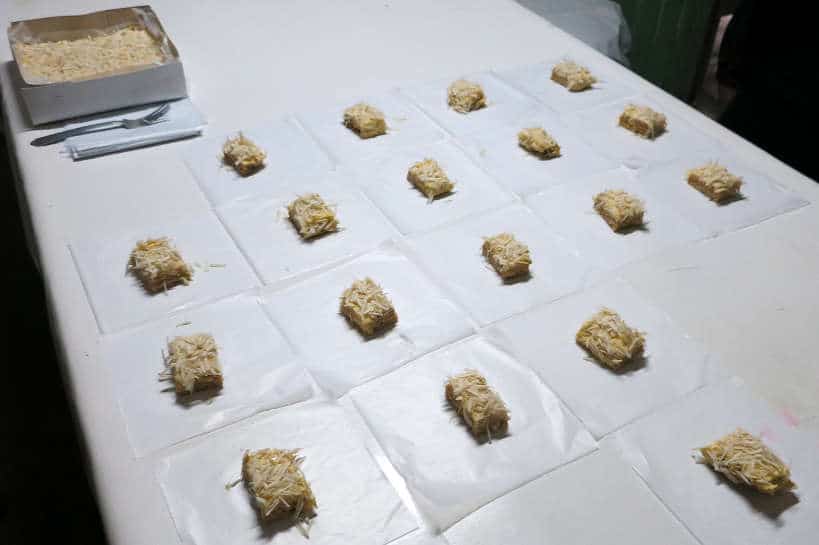 Sansrival fresh from the oven

Sansrival literally means “without rival.” It is a cake layered with meringue, chopped cashews and butter cream. When you bite into the cake, you get the gooey buttery texture loaded with delicious cashew bites.

Both treats were delicious. Claire preferred the Turones de Casoy, while Rosemary enjoyed the cashews in the Sansrival. You can’t go wrong with either of these two treats. Either way, you will get your sugar fix.

The next stop on our Pampanga food trip was at a small traditional place that makes Burquillos and Patko, two Filipino style crepes.

The owner, Aling May Mercado, was making Burquillos, when we arrived.

It was fascinating to see the cooking process and equipment. Using traditional equipment, similar to a waffle maker, she delicately prepare the crepes. 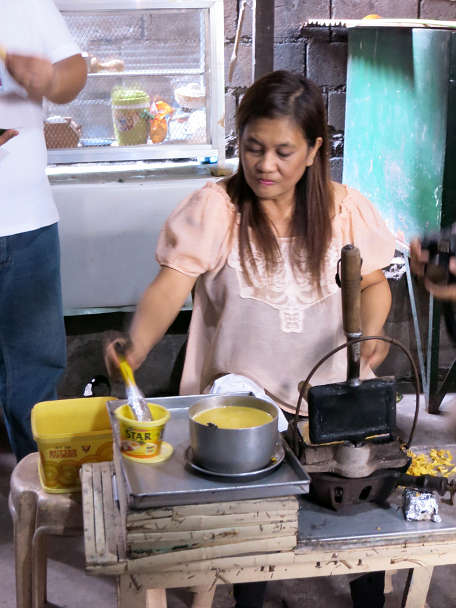 Aling May demonstrating how to make Burquillos and Patko

The Burquillos are plain hard-shell crepes which are sweet and crispy. The Patko on the other hand are sweet and soft crepes stuffed with fresh shredded coconut, wrapped in a banana leaf. 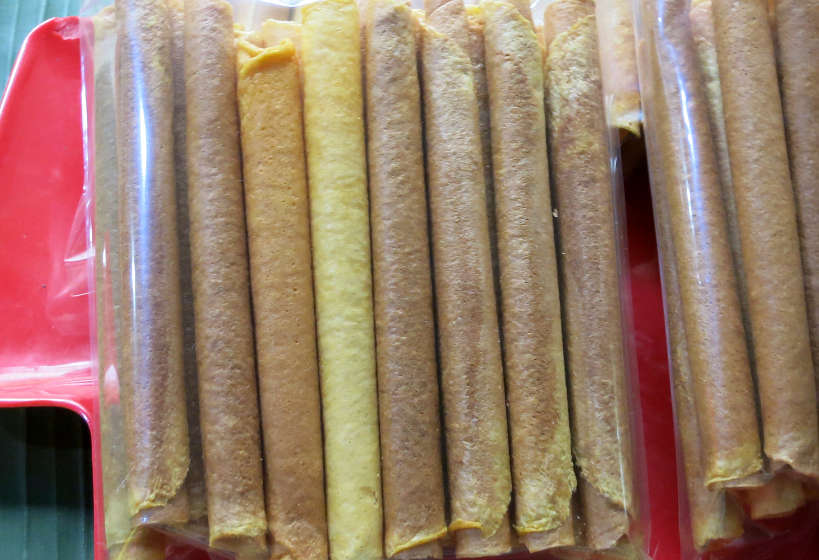 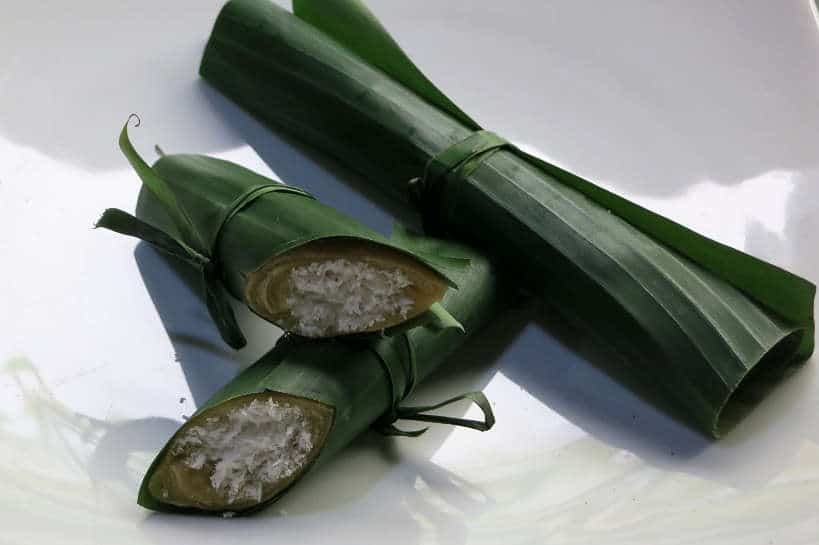 Of the two Pampanga delicacies, Claire’s favorite was the Burquillos, while I preferred the Patko. More than likely, one of these delicacies will suit your taste!

Stuffed and full, we made one last stop on the Pampanga food tour. For this visit, we stopped at Atching Lillian Borromeo’s shop house. Atching Lillian welcomed us warmly in her friendly and simple restaurant in her home.

It was merienda time (snack time) and all sorts of Filipino savory and sweets were ready to be served. But the main reason we stopped here was to learn about Atching Lillian’s specialty, the San Nicolas cookies (St Nicholas cookies).

The story behind the Sanikolas or St Nicholas cookies is quite fascinating.

When they were building churches in Pampanga more than 100 years ago, they used egg whites to glue or hold the stones together and they would throw away the egg yolks.

To stop the waste, the nuns at the church decided to create a recipe using the egg yolks. The cookies were created and dedicated to San Nicolas, the patron saint of bakers. At the time, cookies were given to the devotees on the feast day of St. Nicolas.

Atching Lillian started by showing us the traditional wooden molds that are used to make the cookies. It was impressive to see such old cookie molds, some of them made over 100 + years ago! 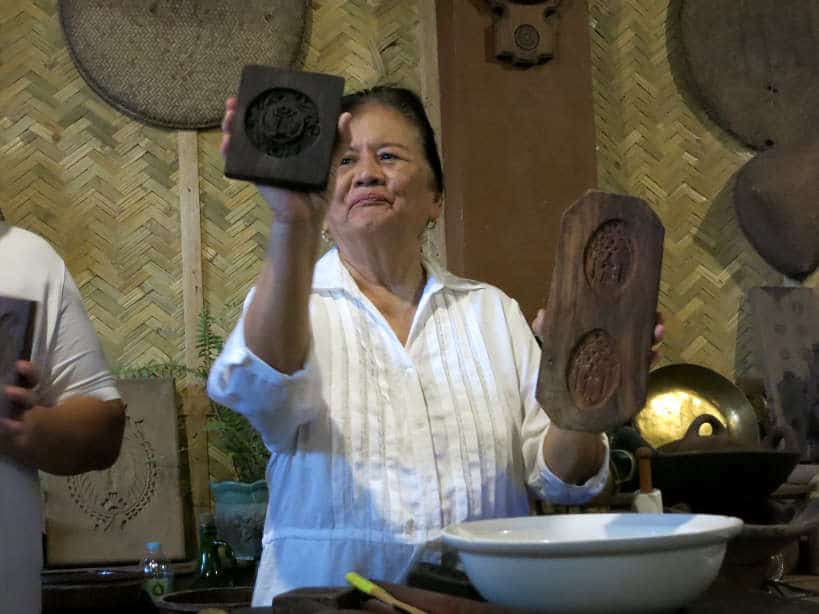 She made the cookies in front of us using egg yolks, milk, cake flour, cornstarch, baking powder and margarine. 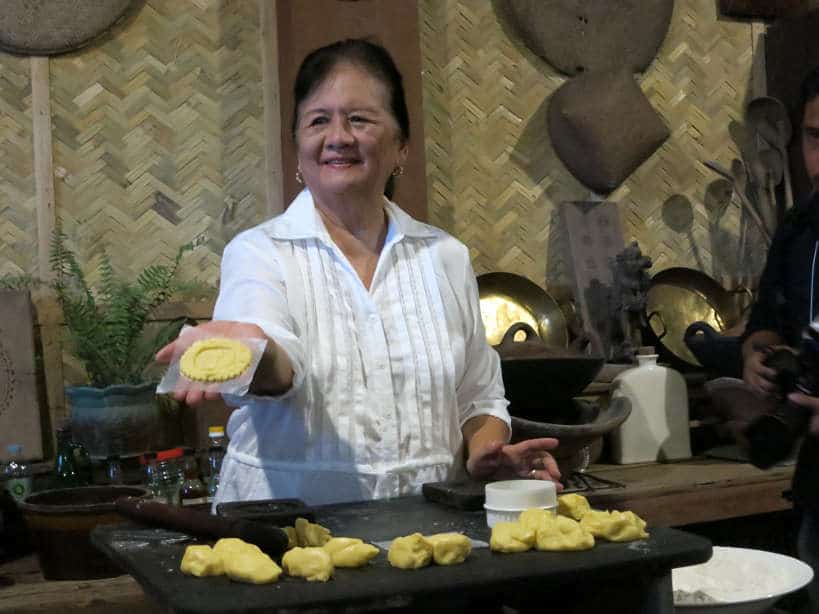 After the cooking demonstration, we were salivating and eager to taste the San Nicolas cookies.

These treats are delicious buttery cookies, that are easy to eat on the go. Our stomachs full from a day of eating could not have more than one San Nicolas cookie.

So we were happy when Atching Lillian told us we could take some to go. They made for a delightful treat on the bus trip back to Manila.

Pampanga produces some of the best and well-known cuisine in the Philippines.

On this Pampanga food trip, we discovered unique traditional dishes and amazing local producers. In particular, one of the highlights was an amazing 10-course meal. This was a 4 hour experience eating  Lechon  Cooked Six Ways (roasted suckling pig from head to tail).

One of the things that we really enjoyed was learning about Filipino cuisine and the distinct regional differences. There is a pride in Pampanga cuisine and it was amazing to taste the unique products.

If you have time for only one day trip out of Manila, go on a  Gastronomic Heritage tour at the culinary capital of Pampanga.

You will be welcomed warmly into the homes of friendly locals who will share their love for Pampanga cuisine and the Philippines in general.

Have you had any regional Filipino dishes? Let us know which ones in the comments below!

Looking for More Information About The Food in The Philippines?

Cebu Lechon: The “Best” Pig Ever According to Anthony Bourdain

10 Unique Illocos Food to Delight in The Philippines 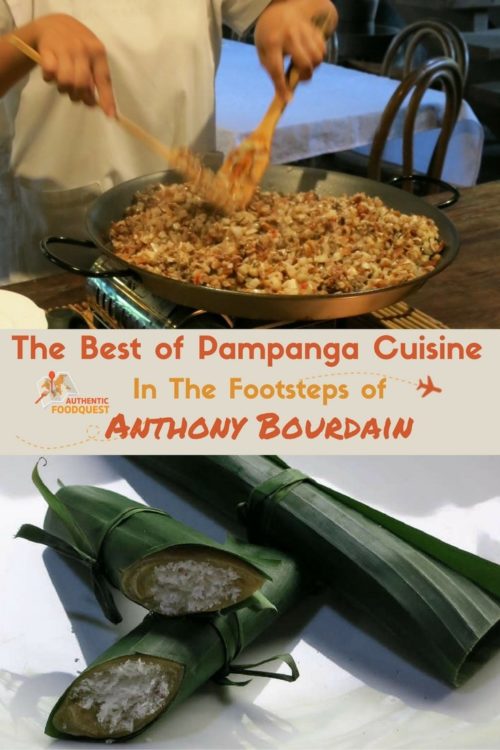 Disclosure: This tour was put together by the Tourism Promotions Board Philippines for TBEX Asia 2016.  As always, all opinions and observations are entirely our own.