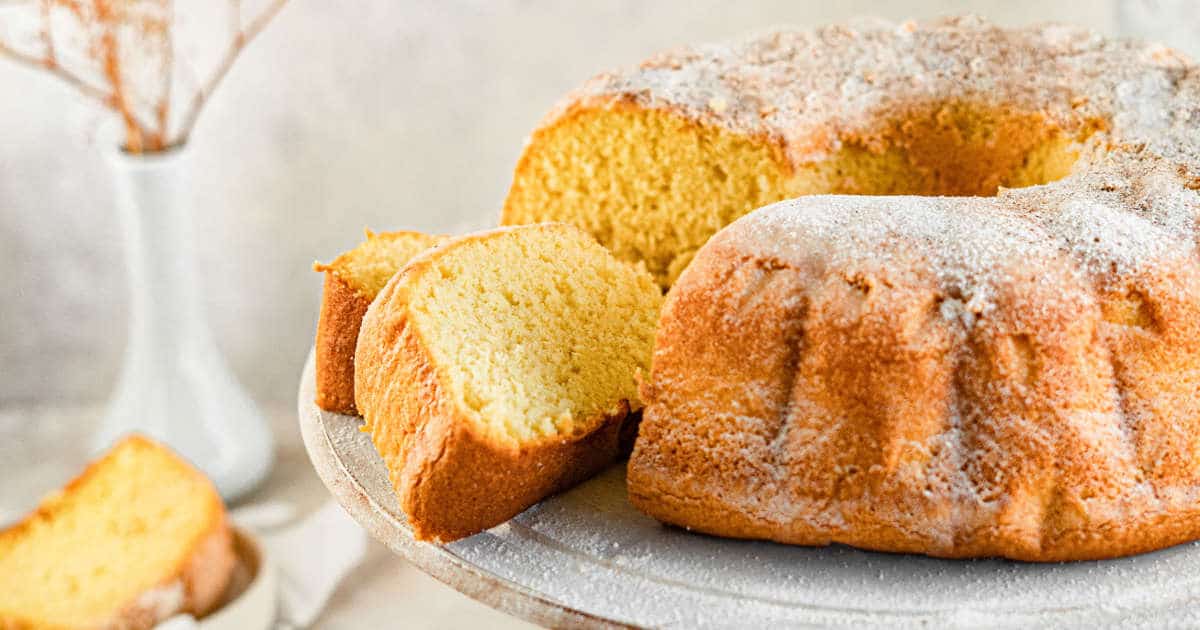 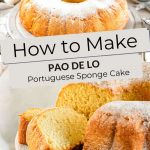 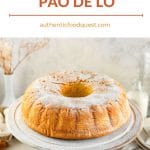 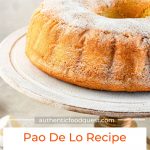 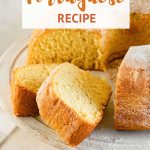 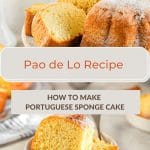 This easy Pao de Lo recipe is for a moist and fluffy Portuguese sponge cake. With just three ingredients – eggs, sugar, and flour, easily make the simple and famous Portuguese cake airy cake everyone will love.

What is Pao de Lo?

Pao de lo is a traditional Portuguese sponge cake that is unbelievably easy to make at home.

The traditional recipe calls for whipping together eggs and sugar, sifting in flour with a pinch of salt, and baking it until slightly golden.

The result is an easy cake that is moist and fluffy and completely versatile. You can eat it as is or top it with whipped cream or fruit jam.

This simple cake can also be used as a base for more elaborate desserts.

What we love the most about this pao de lo recipe is how easy it is to make. This is the kind of recipe you can quickly whip up when unexpected friends are coming over.

RELATED: 12 Of The Most Authentic Portuguese Desserts And Where To Enjoy Them

The Pao de lo sponge cake, one of the most famous desserts in Portugal dates back to the 15th – 16th Centuries.

This cake was made by nuns in the center of Portugal and it is said to have been created from a cooking mistake.

During a visit by the King to the convent, the sponge cake was taken out of the oven early. Fortunately, everyone loved the moist cake making it a success and part of the traditional Portuguese cuisine.

Pao de lo was traditionally baked in wood ovens in clay pots. This Portuguese sponge cake was then introduced to other cultures, most notably Japan.

Portuguese sailors introduced pao de lo, then called pao de castela at their entry, the Port of Nagasaki. The Japanese adopted the recipe and called it Kasutera.

Today, Kasutera is loved all over Japan and considered one of the best traditional Japanese desserts.

It is considered a specialty of Nagasaki, where it is made in the traditional style and referred to as Nagasaki Castella.

With this easy pão de ló recipe, you’ll enjoy the essence of this historic dessert, with a simpler preparation method.

RELATED: 10 Most Popular Portuguese Dishes You Want To Enjoy

While exploring the local food specialities in Lisbon, we took a food tour with a local guide to understand Portugal’s rich culinary history.

The food tour with Taste of Lisboa focused on hidden food gems and that’s where we discovered the sweet tastes of pão de ló.

As described on the tour, the cake was deliciously moist and pleasantly sweet. We enjoyed the delightful cake with tea and it was the perfect match to end the food tour.

Beyond the food tour, pao de lo is available at bakeries throughout Portugal and also typically made at home.

If traveling to Portugal is not in your immediate future, enjoy this traditional recipe for the most famous Portuguese airy cake.

RELATED: 7 of The Best Lisbon Food Tours You Want To Try – Review

Making Pão de Ló at home requires a few staple ingredients that you probably already have.

Here are some tips to help you get the fluffiest and most delicious Pao de lo cake.

Since this recipe uses minimal ingredients, the quality and the way they’re incorporated makes a huge difference

Following are some additional points to consider when making this typical Pão de Ló recipe.

How To Cool Down The Pao de Lo Portuguese Sponge Cake

Don’t be alarmed if the cake sinks and shrinks dramatically and forms folds and creases as it cools. This is normal.

Let the cake cool for at least 10 minutes before handling.

Run a spatula around the cake to make sure all sides are loose before flipping it over.

How To Store Portuguese Sponge Cake

Let the cake cool completely, then store it in an airtight container. You can keep it at room temperature for up to 3 days. Be sure to keep the container away from sunlight or direct heat.

To freeze the sponge cake, wrap it tightly in plastic wrap, making sure you squeeze out all the air. Then place it in a container and freeze for up to 3 months. When ready to thaw, put it in the fridge overnight.

Preheat your oven to 180 C or 360 F. Butter the inside of the bundt pan and place around the upper half of the pan, extending a couple of inches above the pan.

Sift the flour and salt into a bowl. This step is essential to avoid lumps in your batter and to get an even cake.

Crack the room temperature eggs into the bowl of a stand mixer. Beat the egg mixture on high for about 5 minutes. Gradually add in the sugar and beat until the mixture is smooth, pale, and has stiff peaks.

Replace the whisk attachment with a paddle attachment and gradually fold in the flour beating on medium high speed. Work fast, and beat for only 3 to 5 minutes. You don’t want to overbeat the mixture. Make sure everything is blended together and there are no lumps.

Pour the batter into the prepared pan and bake for about 30-35 minutes. To check if it is done, insert a toothpick and it comes out dry, the sponge cake is done.

Remove the cake from the oven and let it cool for about 10-15 minutes. The cake will deflate a little bit, which is totally fine.

Unmold and Pan and Garnish The Cake

Once the cake has cooled, run a spatula along the sides and then flip it on a plate.

Carefully peel off the baking paper. To garnish, sprinkle powdered sugar and cinnamon on top.

How To Make Caldo Verde – A Comforting Portuguese Kale Soup

How To Make Bacalhau a Bras – A Portuguese Favorite Dish

Top Authentic Foods You Want To Delight In Porto