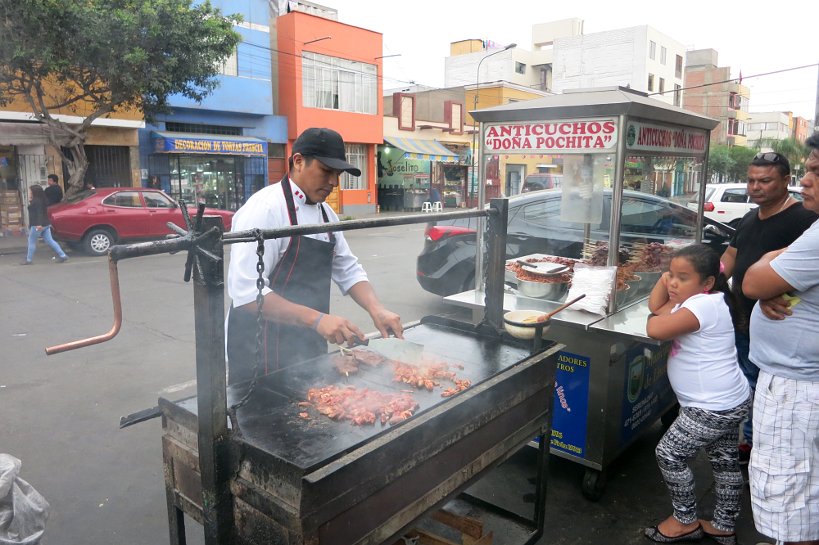 Peruvian Street Food: 4 Dishes And 2 Desserts You Must Try

Street food in Peru is very popular. Of the South American countries (Argentina, Uruguay, Chile) we visited on our quest for authentic food, we were most surprised by the popularity and diversity of the Peruvian street food.

We observed a strong Peruvian street food culture with different types of vendors showing up at different times of the day. In the mornings you find street carts selling breakfast type foods This includes bread with cheese, omelets or fried eggs.

Other traditional breakfast beverages are Maca and Emoliente, two natural beverages with medicinal properties. We discovered them in Cusco and wrote about them in our article Cusco Market and Its Natural Medicine.

In the evenings, another set of street carts appear selling a variety of options including the ones highlighted below.

As the sun begins to set and dusk approaches, the first thing you will notice on the streets of Peru are little carts being set up on virtually every corner. One popular sign you will see is for Anticuchos.

What is Anticuchos? Quite literally, this is meat on a stick served with a boiled potato on the end.

The most traditional Antichuchos are Anticuchos de Corazon, which are pieces of grilled beef-heart served on a stick. They are served with a boiled potato on the end of a skewer and aji, or hot sauce.

If you can’t stomach the idea of beef heart, you can also get chicken, regular beef or even hot dog anticuchos. 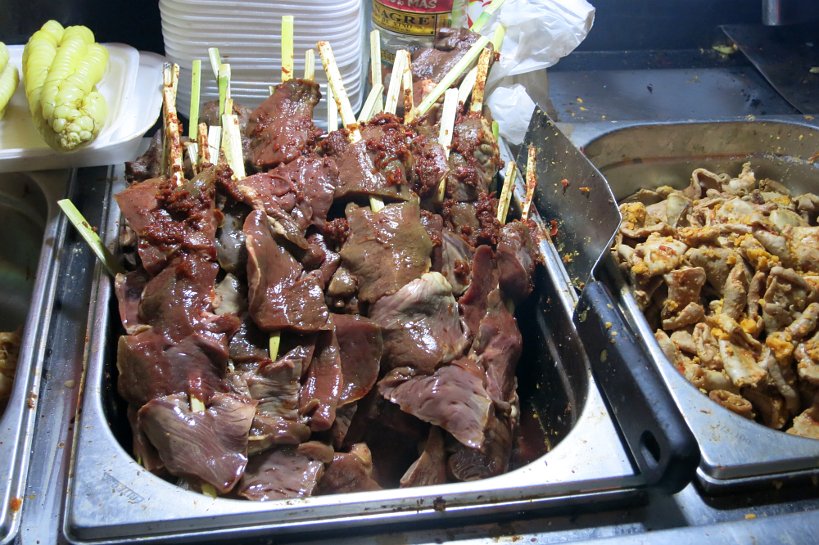 Anticuchos waiting to be cooked

The Story Behind Anticuchos

The story of anticuchos is very much part of the national story of Peru. This tradition comes from the African slaves who were brought by Spaniards to Peru in the 16th century. From time to time, the  Spanish would slaughter cows for food and give the innards which they considered garbage to their slaves.

The African slaves learned how to cook them using different seasonings from the Spanish and the Andes region, transforming them into delicious morsels of meat.

As the story goes, after the slaves were freed in 1874, they moved to the cities to start a new life. Poor, hungry and in search for work, the mothers started selling anticuchos at neighborhood corners.

Attracted by the smell, Limenos (people from Lima) would stop and enjoy them, quickly making them a daily habit.

The number of anticucheras quickly grew and spread throughout Lima and other cities.

Today, anticuchos are loved and eaten by all – young, old, rich and poor. They are a part of the traditional Peruvian cuisine. The greatest consumption is in July during the celebration of Fiestas Patrias or Independence Day. 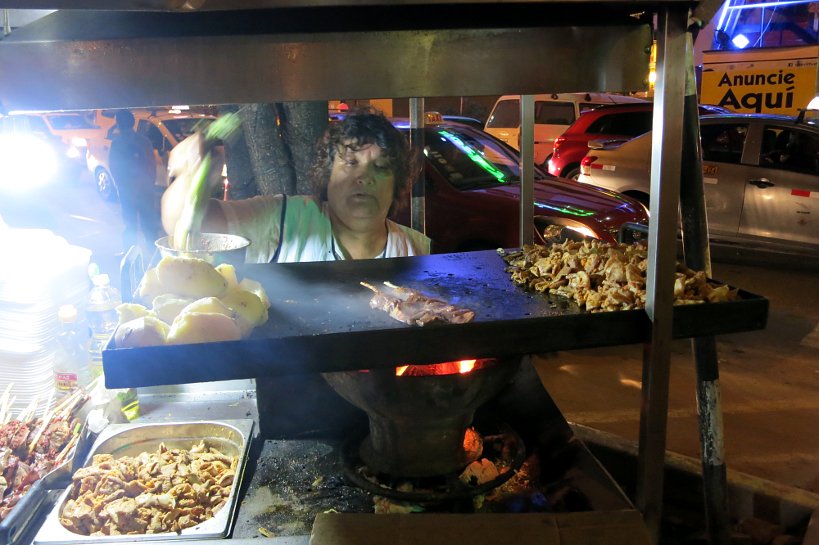 The Taste of Anticuchos

Watching the preparation of the Anticuchos is fascinating. All the skewers are lined up and loaded with pieces of cow heart, beef or chicken. They cooked on order for about 5-7 minutes with a sauce applied regularly.

Surprisingly delicious, is what we thought after eating the Anticuchos. We enjoyed them so much that we had to have them a second time. 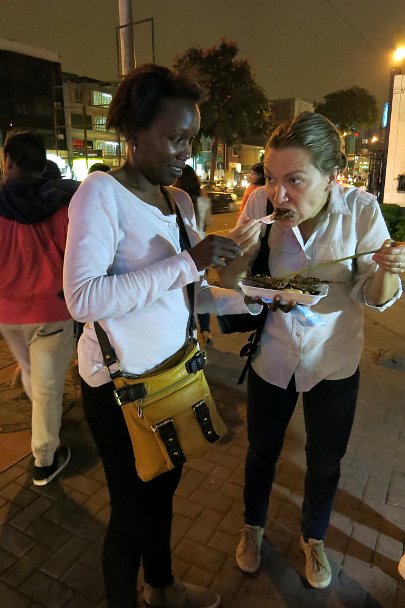 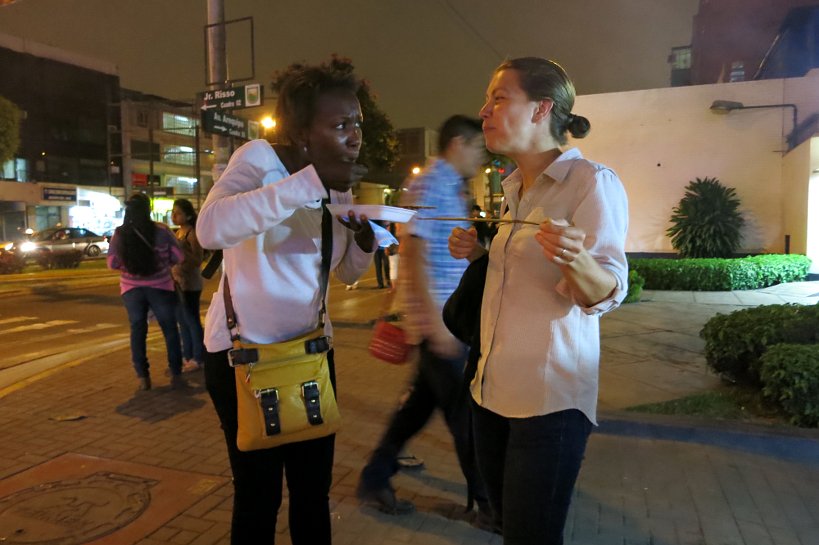 Surprised by texture of Anticuchos

Typically, on the same street cart that has anticuchos, you will most likely see rachi.

Rachi is essentially cows belly. It is a traditional Peruvian food served in the Andes and popular throughout the country. When we had Anticuchos for the second time, we decided to order the “mixto” which is a combination of anticuchos and rachi. 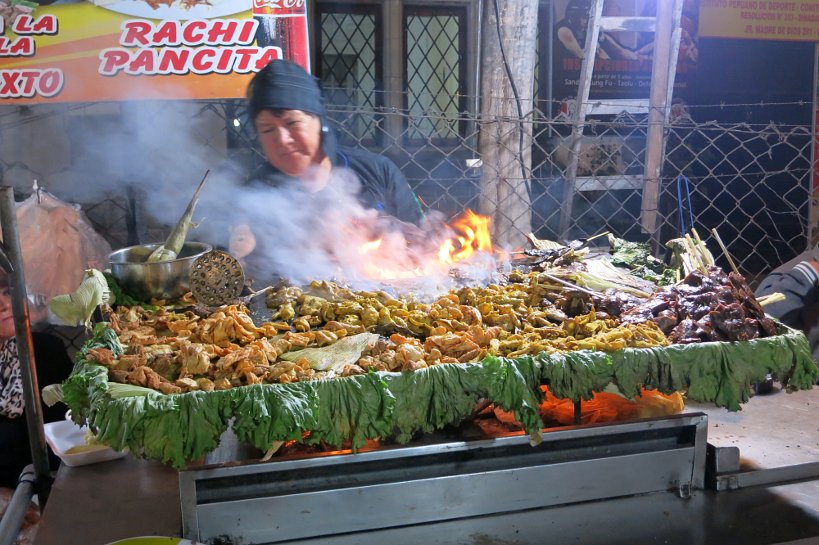 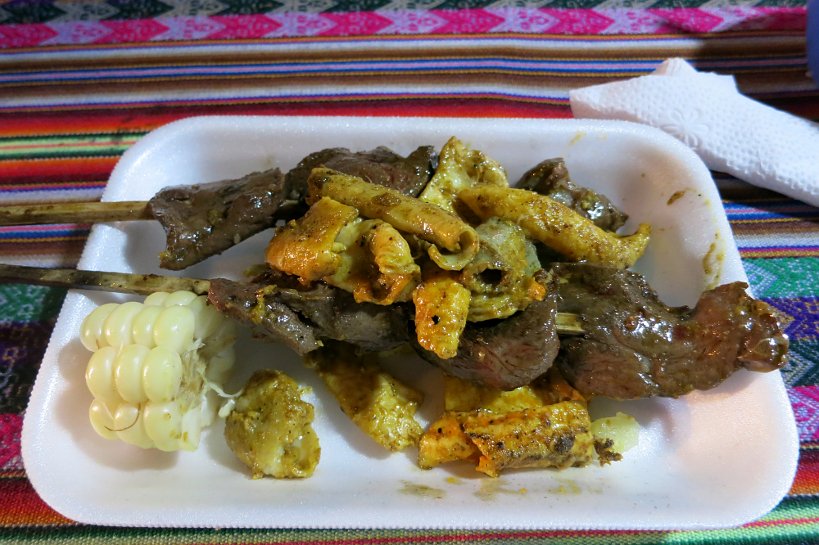 Rachi with Anticuchos on the skewers

We really did not enjoy the Rachi much. We found the texture too chewy and the taste not as delicious as the anticuchos. It is a dish that is well worth trying given its importance in the Peruvian cuisine.

Sandwich vendors are a common street food in Peru. Vendors sell different types of sandwiches including hamburgers, chicken sandwiches and the famous butifarra  (pronounced boot-ee-FAR-ah) which is a pork sandwich.

The vendors place their mobile carts on the sidewalk with their stock of food as well as a plancha (flat metal piece of cast iron over fire) to cook on. Some will have a menu of sandwiches to choose from.

They make an appearance at dinner time between 7 pm – 8 pm and staying open late into the night. 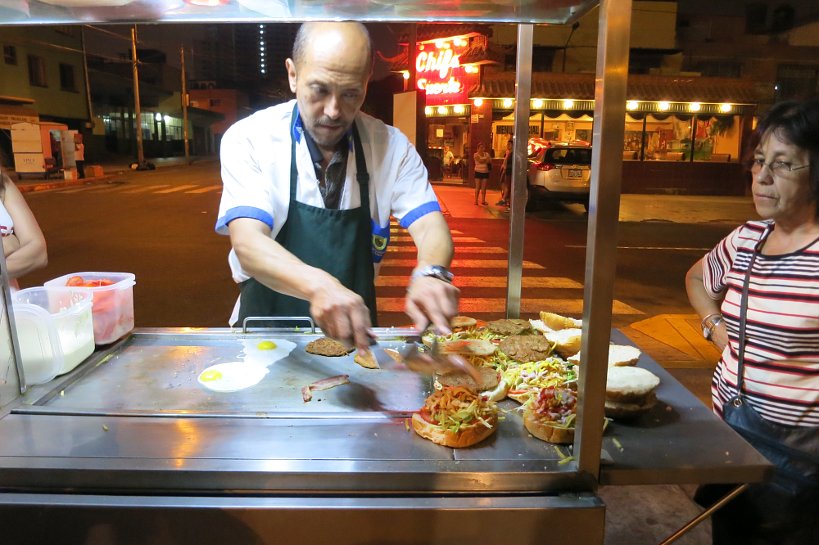 Vendor preparing sandwiches on his cart 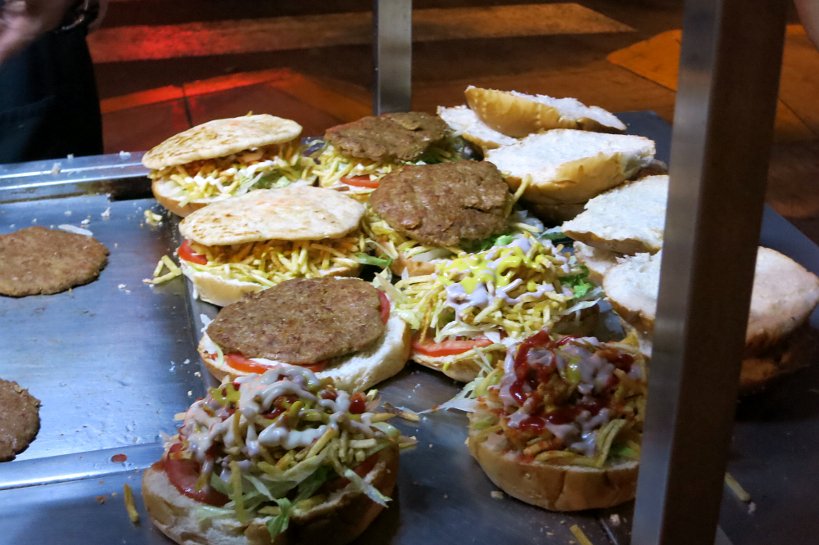 We tried two different types of sandwiches. The butifarra and the hamburger sandwich.

The butifarra sandwich consists of slices of pork on a bread, similar a french bread. It comes with onion and aji (chili pepper) and we added palta or avocado. Incredibly delicious, with a slight spicy kick,  smoothened out by the avocado.

Another name for the butifarra is “jamon del pais” or country ham.

Accompanying the hamburger sandwich were tomatoes, onions, bacon, and the patty. Not knowing what sauce to select, we asked for a combination of all proposed sauces including the spicy picante sauce.

The sandwich was rich and tasty though not exceptional. Nothing like  juicy U.S. hamburgers.

Nonetheless, if you are craving Peruvian street food and want a sandwich, go for the butifarra.

Tamales are a staple that can be found across South America with different flavors and ingredients.

Unlike Mexican tamales, in Peru the tamales are made with Peruvian white or yellow corn. Inside is cornmeal dough filled with chicken or pork, boiled eggs, olives, nuts, and aji (chili pepper) topped with red onion.

They are typically steamed and wrapped in a banana leaf. Easy to eat they make for an ideal Peruvian street food snack. 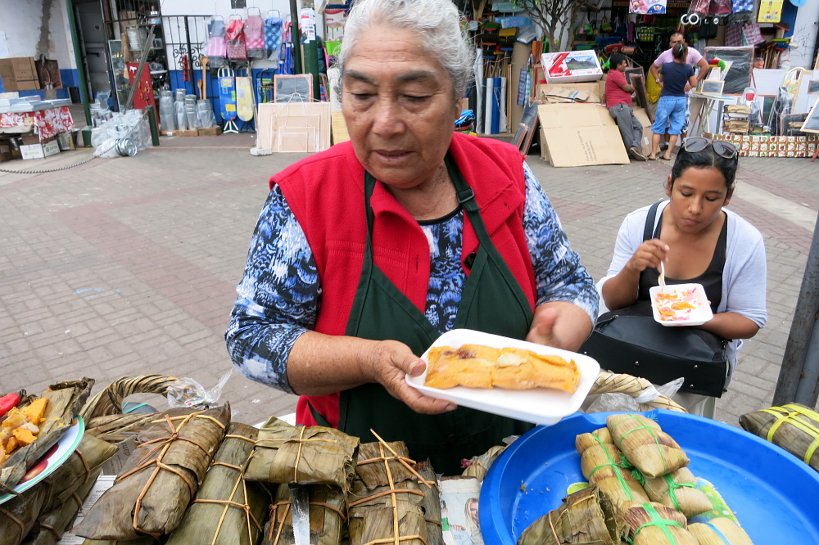 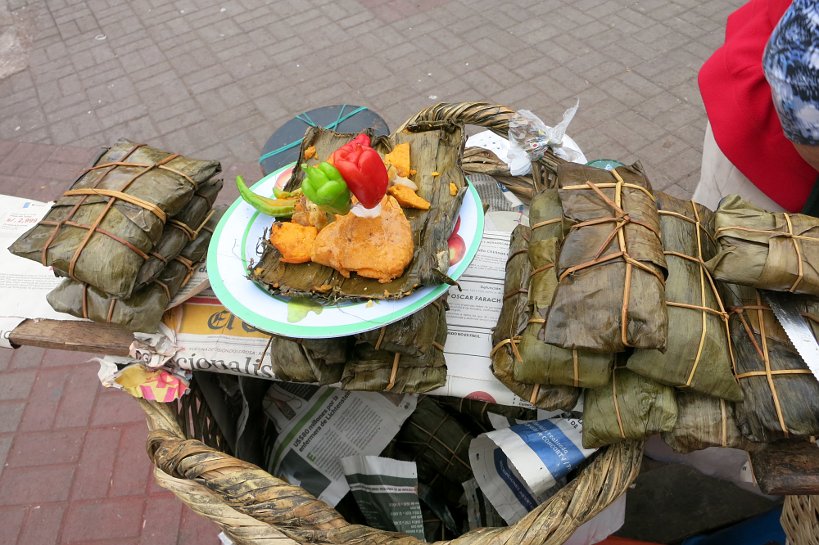 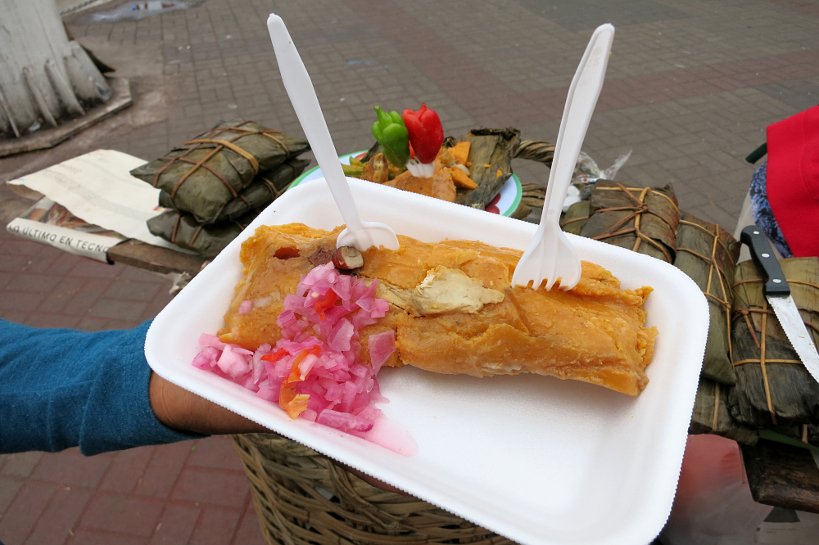 Tamales at the market

Our tamales experience was at a street corner near Surquillo market, one of Lima’s most important markets. A vendor with a warm smile tempted us with her homemade tamales. After seeing locals stopping to get some, we decided to try them as well

The mix of flavors was incredible. You have a great combination of the mild taste of corn with spicy bites of meat.

We found them tasty and liked the convenience of eating it on the go. A great option when strolling the streets and one of our best Peruvian street foods.

Arroz con Leche is the Peruvian version of rice pudding. Brought to Peru by the Spanish conquerors, this simple dessert is a popular favorite.

It is made with rice, sweetened condensed milk and evaporated milk. The purple part is like a porridge and it is made from a concentrate of purple corn starch.

Quite delicious, it is spiced with cinnamon and cloves and mixed with diced apples and apricots. The use of rice in desserts is similar to some Thai desserts we discovered while in Southeast Asia.

This sweet Peruvian dessert can be eaten three ways. Arroz con leche by itself is one option. You can choose only mazamorra morada, which is a typical Limeña dessert. Or, finally, there is the “classical”, which means equal servings of the rice pudding and mazamorra morada. 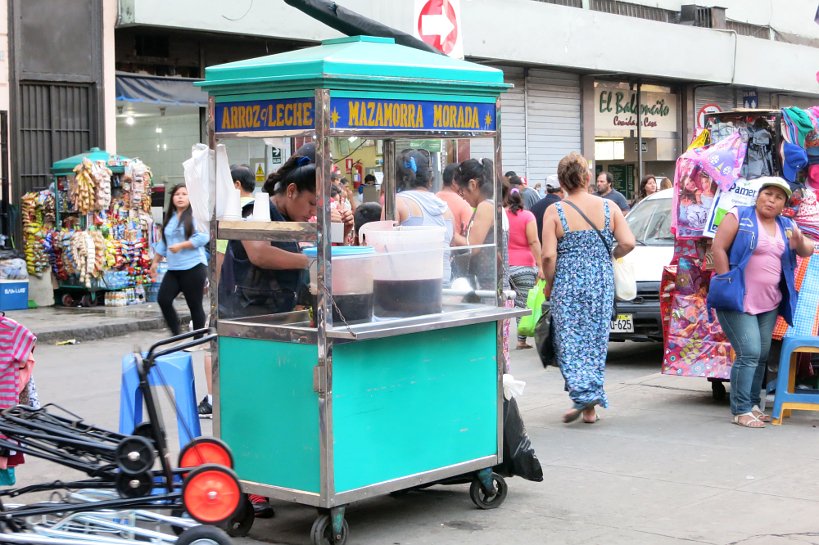 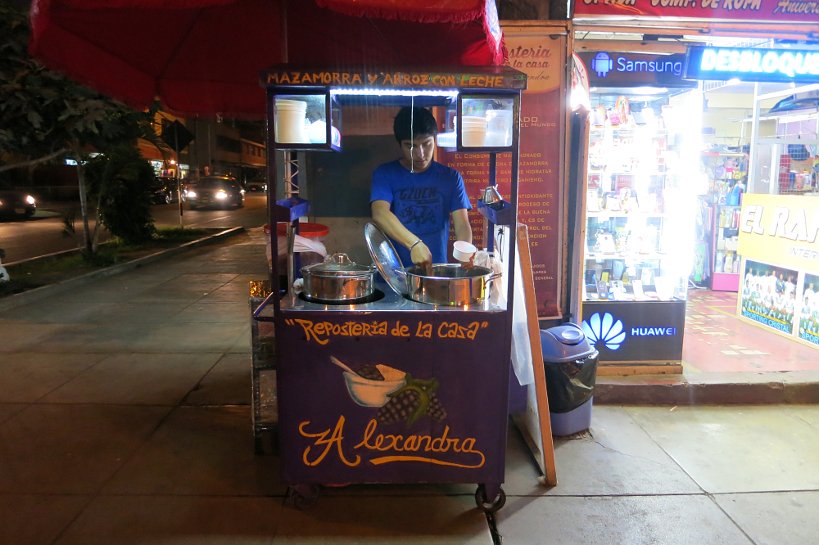 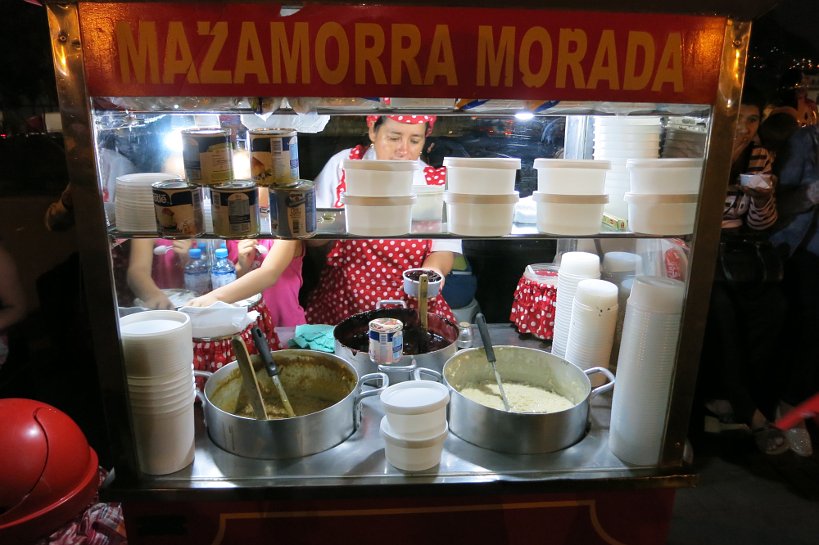 We opted to try this traditional Peruvian dessert as a “classical” and get the best of both worlds. After a few bites, we both much preferred the mazamorra morada.

While rice pudding is something we are familiar with, we found the Peruvian version to be a little too sweet and the rice a little too thick.

Nonetheless, given its popularity in Peru, it is a must eat Peruvian street food worth trying on your travels. 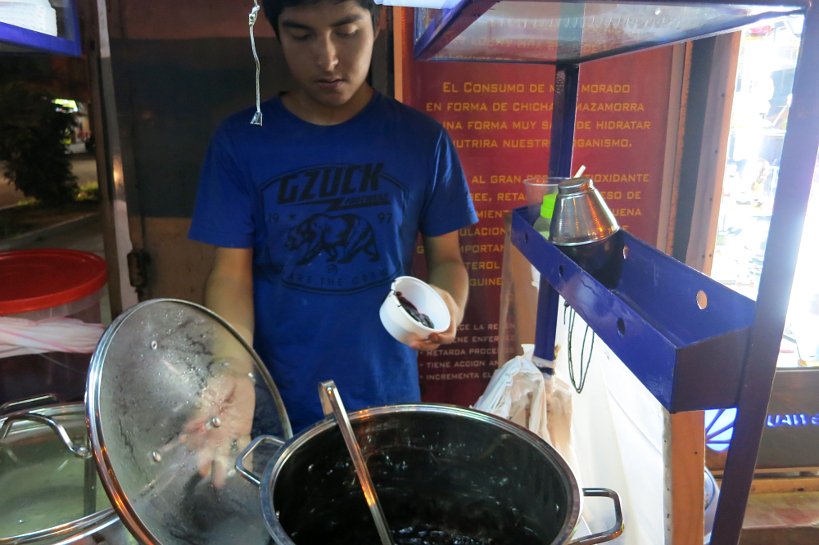 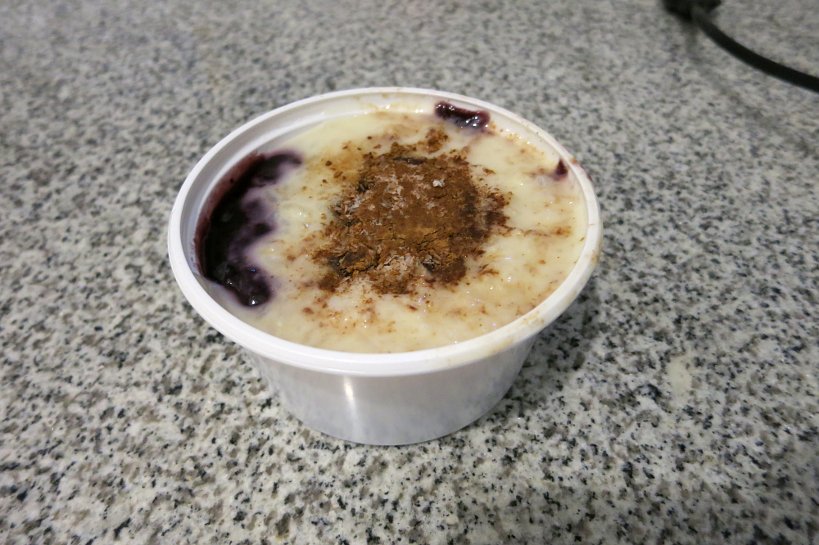 Even though picarones are referred to as a kind of doughnut, they are actually quite different and unique to Peru. The principal ingredients of this Peruvian dessert are sweet potato and squash.

They are deep fried and served with cane syrup called chancaca.

It is a tradition to serve picarones when eating anticuchos. 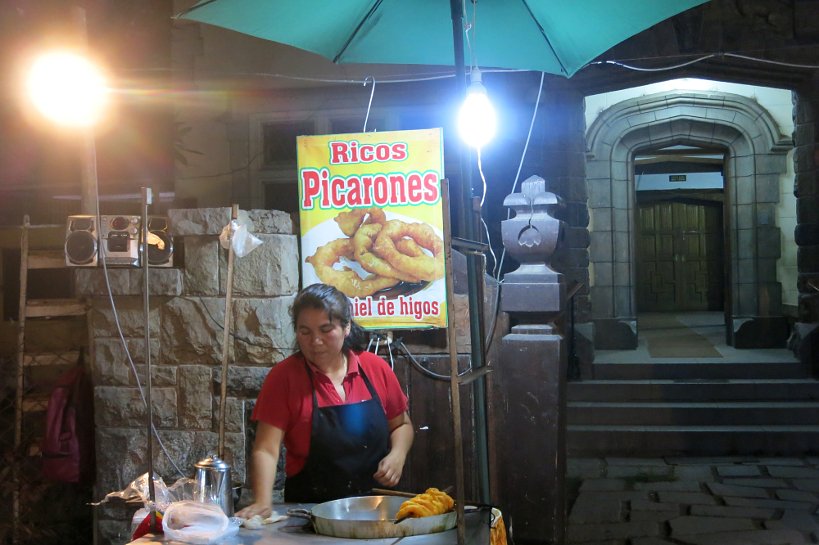 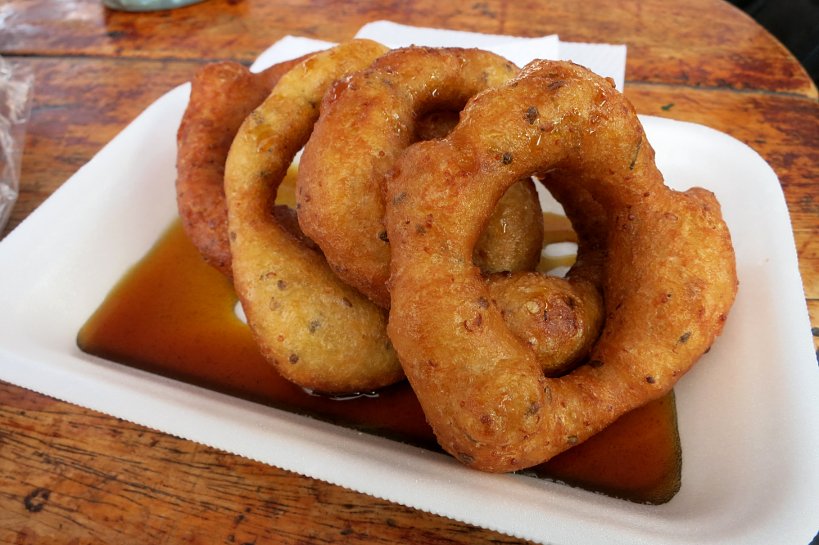 Picarones are typically served in sets of four. The first time we got our order, we were surprised and thought we would not finish them. It was after a big meal and we were already stuffed.

After the first couple of bites, we understood clearly why these little-fried fritters are so popular. They are not overly sweet, and the combination of sweet potato and squash is heavenly.

No questions, this delightful Peruvian street food should be on your list to savor in Peru. 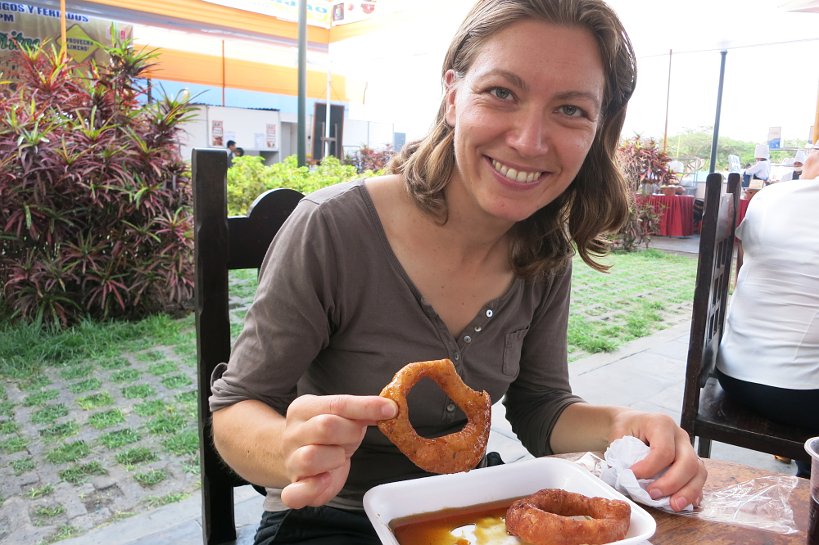 Eating Peruvian street food is a great way to experience local culture. We recommend it highly because it gets you out of the comfort of eating in restaurants surrounded by other tourists or upper-class locals. We’ve shared benches, counters, and tables with locals who are friendly, welcoming and openly curious.

In these settings, we get to appreciate the local culture at an even deeper level. We encourage you to do the same on your travels for a truly authentic experience.

However, as you look at all the tempting food carts and take in the delicious odors of Peruvian street food, one thing you might be wondering about is safety.

On this quest for authentic food in South America, we ate a lot of street food, mostly in Peru and only got sick only one time. This was actually our fault, for not applying one of the tips that we share with you below to safely eat Peruvian street food, or any street food.

Tip #1:  This one is pretty simple and obvious. Look for the carts with the longest lines. If there is a long line or queue of Peruvians. It’s probably a good sign. A long line suggests that there is a high turnover of the food. This means the food is cooked and eaten quickly, reducing the chances of using “old food” that has been sitting around for a while.

Tip #3: And very important, how is the money exchange happening? Is there a second person at the cart to receive payment? If not, is the person preparing the food also handling the money? Are they wearing gloves and taking off the gloves to handle money? Lots of germs can get transmitted by dirty bills and coins. Pay attention here. This is probably why we got sick on our authentic food quest.

Tip #4: Be cautious about the eating utensils. This is a big watch out. Since you never know how the utensils are being washed, it is best to have your own utensils with you. The spork (combination spoon and fork) has been our lifesaver. We never travel without it and it has come in handy in many situations.

Our essential sporks for eating safely

Authentic Food Quest Tip: If your exploring Peruvian street food on your travels and worried about stomach problems, read our tips 10 simple ways to protect your stomach while traveling.

Have you had Peruvian street food before? Tell us in the comments below, your favorite Peruvian food. 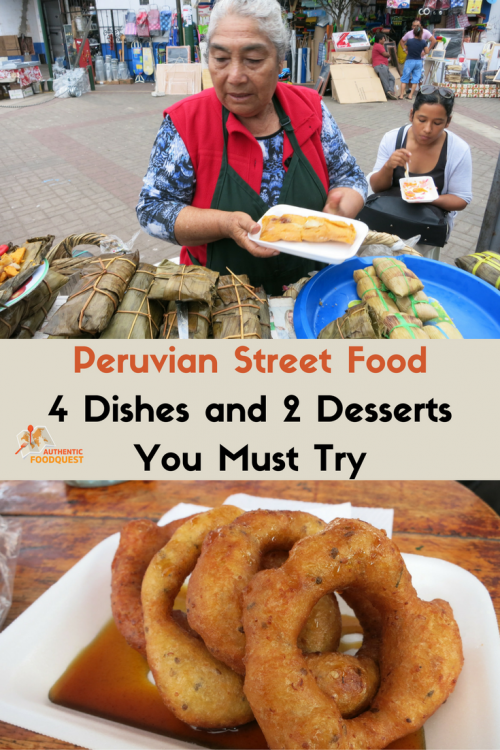 Disclaimer: This page contains affiliate links. That means at no extra charge to you, we earn a small commission when you purchase using these links. Please note we only link to products and services that we personally use or trust. Thank you for your support.

GET YOUR FREE EBOOK

12 Authentic Food Destinations You Want To Experience In A Lifetime

Hi! Welcome to Authentic Food Quest. We are Claire and Rosemary. Our goal is to invite you to explore the local flavors on your travels. Follow our quest for authentic foods from around the world. Learn More About Us 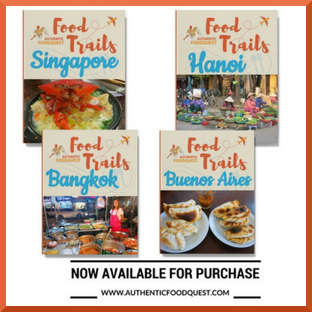 GET YOUR FREE EBOOK

12 Authentic Food Destinations You Want To Experience In A Lifetime

We use cookies on this site to make your experience better! If you continue to use this site we will assume that you're ok with this Learn more