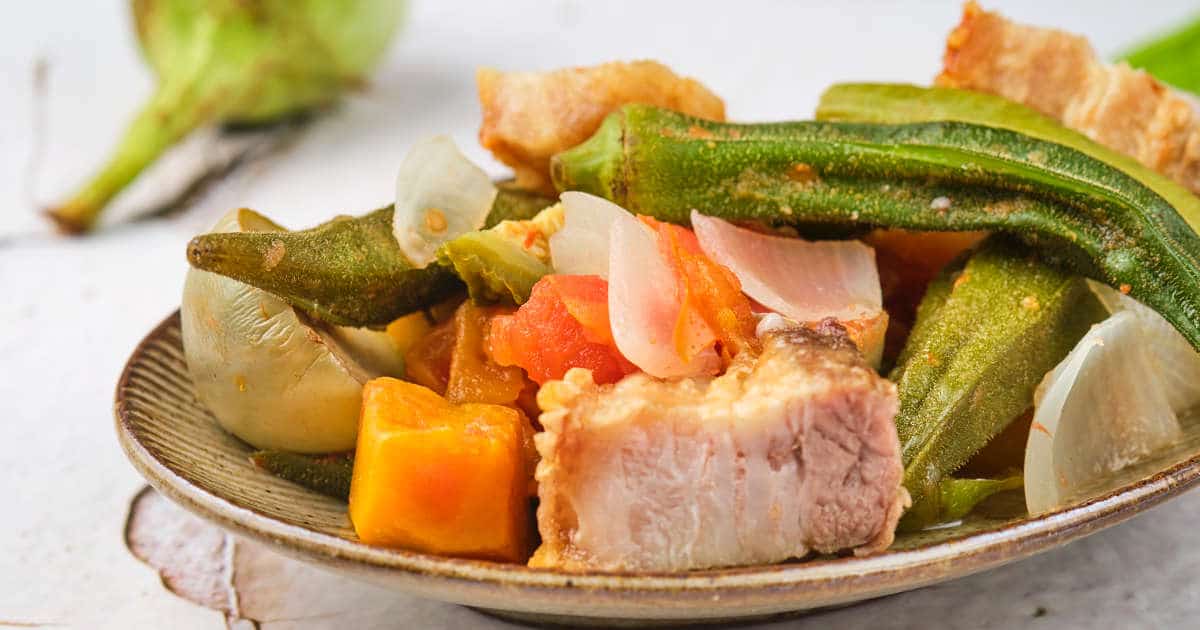 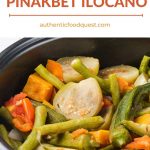 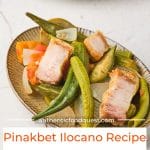 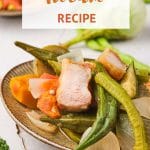 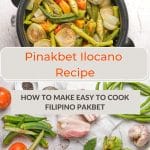 This simple pinakbet llocano recipe combines flavors and textures from a variety of vegetables with crispy bites of pork. The wonderful flavors come to life with “bagoong isda”, an iconic Filipino sauce making it an easy meal to whip up for lunch or dinner.

Colorful and visually attractive, it can be eaten by itself or accompanied with a little bit of rice.

In this pinakbet Ilocano recipe , we use fried pork belly known as bagnet for the protein. And the medley of vegetables includes squash, round eggplants, okra, string beans and bitter melon.

Pinakbet originated in the region of Ilocos, but today it appears in many regional and seasonal varieties.

The word pinakbet is derived from the Ilocano word pinakebbet, meaning “shrunk” or “shrivelled”.

This pakbet or pinakbet vegetable dish is more than a regional cuisine. It is a symbol of the Ilocano palate.

It pays homage to the proud llocano farmers who struggle with the physical environment and from their land produce a much loved heart warming dish.

The bagoong isda sauce is a thick fermented fish sauce typically made from a mix of anchovies and salt. It adds flavor to the dish which complements the vegetables and pork.

As the popularity of pinakbet Ilocano grew, different versions started to emerge. Pinakbet Tagalog from Manila and the southern parts of the country also became popular.

While both are popular, they differ in a number of ways.

The original Ilocano pinakbet calls for cooking all the vegetables in a claypot, with water and seasonings. Everything cooks together until the vegetables have a shrunken appearance.

Cooking pinakbet Tagalog is a little more involved. It is not a one-step cooking approach. The recipe calls to first saute garlic with onions and then add the shrimp paste and vegetables.

The Tagalogs and those from Pampanga love adding a lot of ingredients into their pinakbet. Chicharron, shrimps, squash, and other available ingredients are tossed in.

The llocano style version is simpler. All that is needed are tomatoes, garlic, eggplants, long beans, okra, winged beans, and other local vegetables.

Squash is not found in the original ilocano pakbet recipe, although it is commonly used and we have added it to this recipe.

Whereas the Tagalog pakbet recipe calls for shrimp paste or bagoong alamang. In some cases sugar is also added to the Tagalog version.

Discovering Pinakbet Ilocano in the Philippines

The Ilocos region of the Philippines has one of the country’s strongest culinary traditions.

In collaboration with the Philippines Tourism Board, we had the opportunity to visit the region and explore the regional specialties.

Pinakbet or pakbet, one of the Ilocos popular dishes, quickly became one of our favorite dishes. Everywhere we went we made it a point to have the mixed vegetable stew.

What we particularly enjoyed about eating pinakbet in Ilocos were the tasty flavors in the local vegetables.

Baby bitter gourd or ampalaya, a new vegetable to us, had a sharp taste and loads of nutritional benefits.

The combination of flavors with fish bagoong isda sauce and the addition of pork and shrimp made pinakbet our go to meal.

This pinakbet Ilocano recipe is an easy vegetable dish to make at home. In this recipe we use fried pork belly or bagnet for crispy flavors and squash for additional substance.

RELATED: 10 Unique Ilocos Food To Delight On In The Philippines

The combination of vegetables with pork and shrimp paste is what makes this dish so delicious and a true Filipino creation.

Simple to make at home, here are the ingredients for pakbet Ilocano.

Aromatic and packed with flavor, bagoong is an indispensable condiment for pinakbet and Filipino cooking in general.

The bagoong adds flavour and depth to the dish. In the Philippines, pinakbet Ilocano is made traditionally using bagoong isda, a sauce made with fermented fish like anchovies.

You can order anchovy sauce online and enjoy the bold flavors of the hearty Ilocano style pinakbet.

Where to Find Pinakbet Vegetables

You’ll find the ingredients for this pinakbet Ilocano recipe at Asian or Filipino supermarkets in your area.

Most of them will carry basic Filipino ingredients like bagoong, bitter gourd, small round eggplants and more.

If you do not have access to an Asian market locally, you can order anchovy sauce and other items online.

Heat oil in a frying pan and brown pork until crispy. Set aside and let it cook.

Cut Up Vegetables For Pinakbet

Chop up all the vegetables for the pakbet recipe. Aim to cut up the pieces into similar sizes to ensure everything cooks evenly.

As you cut up the bitter gourd, please be sure to remove the seeds as well.

Boil water in a pot and add the anchovy sauce. Add the vegetables, starting with the squash then the okra, bitter melon, eggplant, string beans, tomato, onions, garlic and ginger.

Cut up the bagnet or fried pork into slices and add to the vegetable stew and serve. Pinakbet is a complete meal on its own or you can add it as a side dish to a serving of rice.

For the Bagnet or Fried Pork Belly

Cebu Lechon “The Best Pig Ever” According to Anthony Bourdain

The Best of Pampanga Cuisine In The Footsteps of Anthony Bourdain

14 Comments on “Pinakbet Ilocano Recipe: How To Make Easy To Cook Filipino Pakbet”