This teh tarik recipe is for a delicious, frothy, milky tea from Malaysia. Simple to make using just four ingredients, you can easily sip on Malaysia’s national tea in 10 minutes or less

What is Teh Tarik?

Teh Tarik is a simple yet flavourful milk tea that is very popular in Malaysia. Found at coffee shops or Kopi tiam and Indian Muslim Mamak eateries, teh tarik is consumed throughout the day. from breakfast to dinner.

Interestingly, teh tarik is also the official drink for football fans in Malaysia. It is as popular as beer is to US or European fans.

Teh Tarik translates to “pulled tea” where Teh means tea and Tarik means pulled. Its name comes from its pulling preparation which is an art and act of showmanship.

The tea is poured from one pitcher to another as high as possible, without ever spilling a drop.

This pulling process is what makes teh tarik very frothy and light. It also improves its flavor and mixes the tea with condensed milk thoroughly.

Deeply embedded into Malaysian local culture, teh tarik is recognized by the government as an important part of Malaysia Food Heritage.

Outside of Malaysia, teh tarik is also popular in Singapore and around the world.

History of Teh Tarik

Teh Tarik was brought to the Malay Peninsula by Indian Muslim immigrants.

Prior to World War II, they used to drink and serve chai because chai tea leaves were common and cheap. It was prepared with black tea and full cream milk.

However, after the war, chai tea leaves became expensive forcing the immigrants to innovate.

Using the discarded tea leaves after the best tea was sold to the British, immigrants used the remains.

Tea powder derived from the broken tea leaves made a strong bitter tea. So bitter was this concoction, that in order to balance it out, condensed milk was added.

The condensed milk reduced the bitter taste giving birth to this much-beloved pulled tea. A popular street beverage, teh tarik became an important part of the local food culture.

This pulled tea is known as the national drink of Malaysia.

Making teh tarik is a sport with competitions held for the most creative way of “pulling” the tea. Pulling is an important part of teh tarik to mix the tea effectively and produce a thick and foamy top.

Another interesting way in which teh tarik rose to popularity is through a video game called Coffee Talk.

Coffee Talk is a visual novel and its gameplay follows a barista in a coffee shop who listens to the concerns of its patrons.

The game features many real-life beverages from different parts of the world, one of which is teh tarik from Malaysia.

The players make Teh Tarik and learn more about the beverage as they play Coffee Talk.

RELATED: 10 Unusual Malaysian Drinks To Experience Like a Local

Discovering Teh Tarik in Penang, Malaysia

We were pleasantly surprised when tasting Teh Tarik for the first time during our visit in Penang, Malaysia.

And, unique local drinks are part of the culinary highlights.

While exploring the diverse drinks, we were captivated by the foamy, creamy and delightful taste of teh tarik.

Drinking this Malyasian pulled tea by itself or accompanying Roti Canai, an indian flatbread, was always enjoyable.

And, we’re excited to share this teh tarik recipe for a taste of our favorite Malaysian tea.

Teh Tarik in Malaysia is more than just a cup of tea with condensed milk. It is a revered Malaysian drink that is deeply embedded into the local food culture.

READ MORE: The Best of Penang Food: Our 9 Most Beloved Authentic Dishes

Teh Tarik Recipe – How To Make Teh Tarik at Home

Making Teh Tarik at home is actually quite simple. You need only four ingredients that are easily available for this teh tarik recipe.

Which Tea to Use To Make Teh Tarik?

For the best teh tarik experience, choose loose leaf tea which is usually the highest quality tea. Loose leaf tea is made of whole unbroken tea leaves which have the most flavor and yield the best tasting tea.

Tea sachets and tea bags can also work if looking for convenience or are short on time. However, the flavors may not be as intense.

Authentic teh tarik tea is made with strong black tea and we recommend Ceylon loose tea. Ceylon tea from the mountains of Sri Lanka is strong and bold bringing out the flavors in this teh tarik recipe.

If you’re not able to get hold of loose tea leaves, you can use Lipton black tea sachets and steep them.

If you want to make this Malaysian tea fast and not follow this teh tarik recipe, you can order it from Amazon.

Teh Tarik sachets are available for ease and comfort of making teh tarik at home. You simply steep the teh tarik sachets in hot water and enjoy the milk tea with little effort.

How Much Caffeine in Teh Tarik

Tea contains caffeine though generally less when compared to coffee. The amount of caffeine in both tea and coffee vary based on the processing and brewing methods used.

Ceylon tea which is tea from the Sri Lanka highlands is available in several varieties, like green, white and black.

This teh tarik recipe calls for the use of Ceylon black tea. Ceylon tea, like other teas, contains a small amount of caffeine. It is also rich in antioxidants and has several trace minerals.

What is The Difference Between Teh Tarik and Milk Tea

Milk tea is simply tea with the addition of milk. It can be a simple splash of milk in a hot cup of tea or a creative recipe involving other ingredients.

There are no set guidelines for the amount of milk to use in milk tea. A lot depends on personal taste and type of tea brewed.

Milk tea is popular around the world and commonly consumed in India, England, Sri Lanka, Southeast Asia, and more.

Teh Tarik is typically made using condensed milk. This makes the tea richer and creamier. Also, the act of “pulling” the tea is uniquely Malaysian and rooted in the culture.

Beyond being a simple tea with milk, teh tarik is also growing in popularity among gamers and millennials around the world.

Can I Drink Teh Tarik Hot or Cold?

When we were in Penang, Malaysia, we observed Teh Tarik typically served hot in a glass cup.

There are different ways in which you can steep the tea leaves. For this teh tarik recipe, we use a tea infuser. However, feel free to use what is convenient for you.

Tea Infuser: Add tea leaves to an infuser and place it in a cup. Add boiling water over it and let it steep for 3 minutes.

Saucepan and Tea Strainer: Add tea leaves in a tea pot or saucepan with boiling water, let it steep for 3 minutes and strain in a cup.

Tea Tumbler: Drop loose tea leaves in your tea tumbler along with hot water. Close the lid and let it steep for at least 3 minutes.

Tea Sachets: Drop a tea bag in a cup of hot water and let it steep for 3 -5 minutes. We recommend Lipton black tea bags.

Add the sweetened condensed milk to the tea and water mixture.

Condensed milk not only gives Teh Tarik a rich aroma but also sweetens it.

The more condensed milk you add, the more light, sweet and milky the tea becomes.

If you prefer your teh tarik recipe to be kurang manis which is “less sugar” in Malay, then we recommend using very little condensed milk.

Pulling is what makes Teh Tarik unique and special. To pull or tarik the tea means pouring the tea from one pitcher to another from a height which should be carefully increased with each pull.

This is done to combine the tea evenly with the condensed milk and make it frothier. Have fun doing this as it does require practice and time.

Be sure not to “over pull” the tea as it may get cold quickly.

In Malaysia, this pulling practice is widely regarded as an act of showmanship at the Mamaks, or food stalls. So much so that competitions are held to find the most stylistic and thrilling way to pull Teh Tarik.

If you want to know how to make the authentic Malaysian Teh Tarik, practicing the pulling method is the way to go. 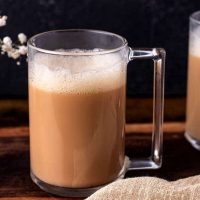 Why You Should Discover Nyonya Food in Penang

10 Surprising Facts You Need To Know About Malay Food

9 Reasons To Feast On Penang Food in Malaysia

10 Best Vietnamese Cookbooks You Want To Have In Your Kitchen