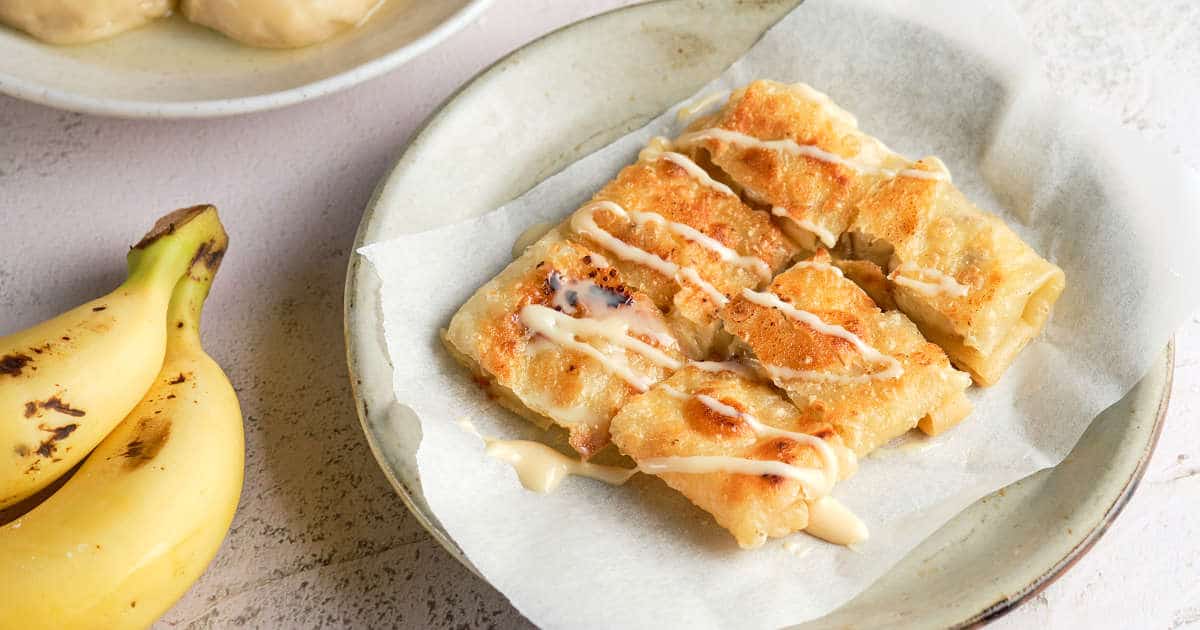 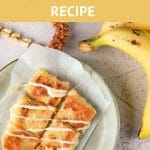 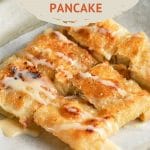 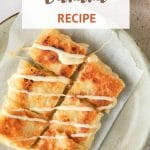 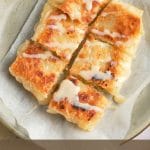 This Thai roti recipe is for a popular Thai street food also called Thai banana pancake. A crispy pancake served with condensed milk and banana, the sweet and salty flavors will get you hooked immediately. Simple to make with just a few ingredients, discover one of Thailand’s most popular treats.

What is Thai Roti or Thai Banana Pancake

Thai banana roti or โรตีกล้วยหอม is a tasty pan fried snack or dessert found all over Thailand.

Loved and popular among locals and visitors to Thailand, they are irresistibly addicting.

The roti is cooked on a griddle and then layered with sliced banana pieces. It is topped with a good drizzle of sweetened condensed milk with a light sprinkling of sugar.

Typically, Thai roti is then cut up into bite-sized pieces and served with a wooden stick for eating and sharing. The roti can also be rolled up into a piece of white paper making it easier to eat on the go.

The history of roti is complicated and goes back thousands of years. This quintessential flat bread is said to have originated from Indus Valley civilization.

Other theories say it originated in East Africa and was brought over to India.

The term roti is a general term for Indian flatbread and there are many different types of rotis. Roti bread is generally made with whole wheat flour and cooked on a flat skillet.

This Indian flatbread is popular worldwide from Europe, North America, and Asia. Roti recipes vary as well as the roti filling or stuffing used.

In Thailand, the roti is said to have been introduced by Indian immigrants years ago.

Thai roti is also similar to Malaysia’s roti canai, which are famous at Mamak or Muslim-Indian vendors.

In Thailand, the roti is said to have originated in the southern part of the country which has a high population of Muslims.

The Muslim community adapted the Malaysian roti to Thai tastes and preferences.

Most roti vendors in Thailand are of Muslim or Indian origin having had the techniques passed down over the generations.

Roti vendors are usually found on busy streets alongside other Thai street food vendors. For locals, Thai roti is a common breakfast or snack eaten during the day.

While visitors to Thailand often consider it a special treat eaten for dessert after dinner.

In Thailand it is not surprising to see long lines of people waiting to place their orders. The most popular is the Thai banana roti also called Roti Gluay.

The roti is fried dough cooked in a large pancake griddle with lots of butter or margarine. Depending on your order, different sweet stuffings are added.

The most common are banana and sugar topped with sweetened coconut condensed milk.

RELATED: 15 of the Most Popular and Delightful Thai Desserts to Indulge In

The first time we visited Thailand on our quest to explore the local food specialties, we were immediately captivated by this dessert.

On most evenings on busy Bangkok streets we would watch in amazement as Thai roti vendors stretched out the dough. The skillful hands and quickness involved in flipping the roti was hypnotizing.

Intrigued and looking for a sweet treat to finish off a spicy meal, we enjoyed several Thai banana roti from different vendors.

The most popular and our favorite is the traditional filling roti gluay, made with banana and sweetened condensed milk.

Today, you’ll find Thai roti vendors with creative fillings that may include chocolate, nutella, and more.

This Thai roti recipe is for the traditional version made with bananas and sweetened condensed milk.

Making Thai roti at home is quite simple and does not require many ingredients. What is necessary are periods of wait time.

The wait or rest time allows the dough to settle and also makes it easier to stretch out during the cooking process.

For the Thai Roti Filling

How Ripe Should The Banana Be?

The banana that you use for this Thai roti recipe should not be too ripe, otherwise, it will get mushy after cooking.

Choose a banana that has a little hint of green on the skin. That’s the sign for a perfectly ripe banana.

Can I Freeze The Thai Roti Dough?

You can freeze the Thai roti dough for up to 2 months. The best way to do this is when the dough is raw or not cooked.

After the dough balls have rested, flatten the dough with a rolling pin until about 2mm thick.

Place each flattened roti between plastic wrap or saran wrap and transfer them into a zip lock bag.

When you are ready to defrost them, remove them from the freezer and place them in the fridge to use the next day.

After the dough balls have defrosted follow the stretching technique described in the instructions below.

Prepare the dough by mixing all the ingredients together. Once the flour has been kneaded and mixed in well, let the mixture rest for about 15 minutes, covered.

After 15 minutes, roll the dough in your hands to form an oval shape and place on a clean lightly floured counter.

Using a knife, divide the dough into 5 equal pieces. Each piece should be the size of a tennis ball or slightly larger than a golf ball. Using your hands, form a ball with each piece and brush with cooking oil.

Place all the balls back in a bowl with cooking oil, and let the dough rest for about two hours.

Once the dough has rested, flatten each ball on a flat surface. To shape the roti, stretch out each edge as far as it will go, without breaking the dough.

Gently lift the stretched roti and place it on a pan over medium heat. Straighten out any edges that have folded and then arrange the banana in the middle of the roti.

Cook the roti on both sides until crispy and golden brown. When ready, remove from the pan and cut up the Thai roti on a cutting board.

Drizzle condensed milk, a sprinkle of granulated sugar, and enjoy while hot. 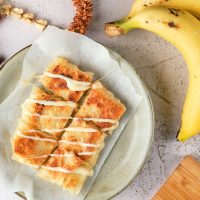 10 Tips For How To Eat Like A Local in Bangkok

15 Authentic Chiang Mai Food And Where To Eat It